At the COP27 in Sharm El-Sheikh in Egypt, the Minister of Lands and Natural Resources, Samuel Abu Jinapor, while co-chairing a meeting with the United States’ Special Presidential Envoy for Climate, Secretary John Kerry, on November 11, said the world is finally recognising Ghana’s pioneering role in the restoration of it’s forest cover.

“Let me point out that we have challenges in other sectors and we have challenges in the preservation of the forest estate of our country; as you know, illegal small-scale mining continues to be a major issue, which is something that we’re working on but fundamentally, the world is recognising Ghana’s lead, pioneering role in the restoration of our forest cover,” he stated at the meeting, which was attended by 28 other ministers and five observer countries with a mission to save the world’s forests.

Restoration of the country’s depleted forest cover has been a topical issue.

Over the years, the government has invested heavily in afforestation and reforestation, but the critical role of industry players in realising this goal cannot be overlooked.

Therefore, in 2010, when the country’s timber sector players (loggers, millers and exporting companies) decided to turn a long legal battle with the Forestry Commission over the payment of the export levy, into a venture that would tackle deforestation and sustain the sector, many saw it as a positive move.

Today, the decision has led to the establishment of large-scale plantation projects in parts of the country, which are also contributing to employment creation and national development.


In 2008, the timber sector players, after a protracted legal tussle with the Forestry Commission on the payment of the export levy, agreed on an out-of-court settlement that the levy be reduced from three per cent to 1.5 per cent and that one-third of the agreed deduction (0.5 per cent) be put into a special fund to be used for the development of industrial tree plantations.

The decision was against the backdrop of the slow rate of replenishment of commercial timber species in the natural forest and the need to augment the natural supply source with plantation timber to feed the expanding processing capacity of local mills. 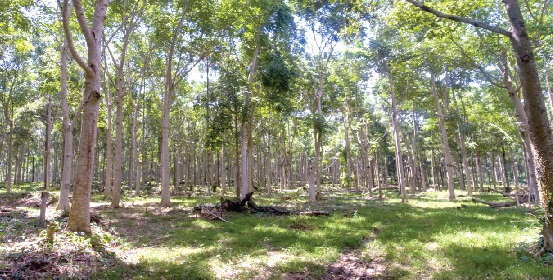 Under the agreement, the sector was to raise funds to increase the rate of commercial plantation development in the country.

Not satisfied with how the National Forest Plantation Fund was being managed, the industry players demanded a separate fund arrangement for the management of the 0.5 per cent levy.

In furtherance of the collaborative effort, a committee with representation from the Forestry Commission and other players were appointed in 2009 to manage the fund.

The mandate of the fund committee, as established during the out-of-court settlement, was to apply the fund money directly to the development of timber plantations to supplement raw material supply to the timber industry.

The Timber Industry Plantation Project, established 12 years ago contributes towards reforestation through plantation development, and has produced a combined plantation coverage of 3,556.64 hectares, with a total permanent workforce of 700 across seven plantations that have been established in three regions.

Additionally, the project engages 400 seasonal workers between May and September every year in furtherance of its mandate to help salvage the ecology.

The plantations are at Asenanyo, Afram Headwaters, Opro and Mankrang forest reserves in the Ashanti Region; Pra-Anum and

Essen Apam forest reserves in the Eastern Region and Paamu Berekum Forest Reserve in the Bono Region.
Giving the breakdown of the plantations in hectares and species, a Member-Secretary of the plantation project, Dr Adam

Asamoah, said Asenanyo covered 175 hectares and was planted with Cedrela, Ofram and Wawa, while Afram Headwaters covered 81.71 hectares with teak.

Dr Adam, who spoke to the Daily Graphic, was convinced that the plantations would reverse the decline in the source of indigenous wood supply and by extension, slow down the debilitating effects of climate change.

On the broader application of the fund, he said it was applied in three main operational areas, namely commercial plantation development, plantation research and social/ corporate responsibilities. 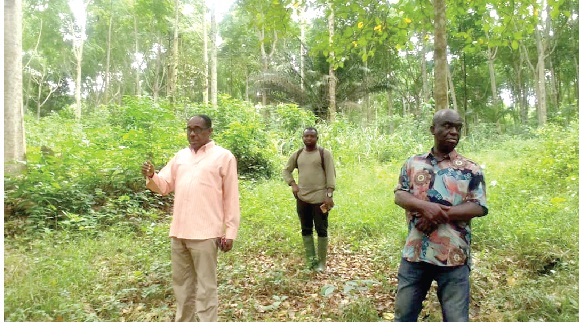 Dr Adam said the community-sensitive and people-centred fund had a working policy of spending up to five per cent of its annual operational budget to support community development work, environmental protection interventions and the construction and maintenance of feeder roads near forest reserves.

Besides, the fund annually supplies seedlings for planting in schools, colleges and universities.

He said the fund committee was keen on the maintenance and expansion of plantations in fulfilment of its core mandate to restore the ecology to its natural state.

The Chairman of the Industry Plantation Project Fund Committee, Nana Dwomoh Sarpong, said, "Forests, the natural habitat for many plants and animals and a source of livelihood for humans, are under constant threat due to uncontrolled, human activities."

He added: "The combined effect of unbridled illegal logging, human settlement, urbanisation, agriculture and the massive pollution of water bodies, has led to the systematic depletion of a substantial portion of the country’s forest cover."

He stated that the country’s natural high forest zone should be protected for the good of posterity.

Citing statistics by the Forestry Commission, Nana Sarpong said current estimates of Ghana's permanent forests in the form of protected areas, stood at less than one million hectares.

The writer is a Deputy News Editor of the Daily Graphic