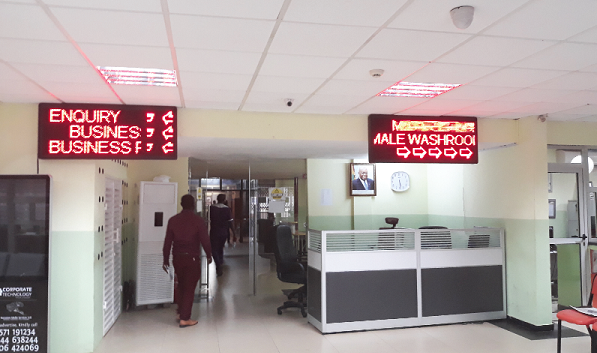 In its back offices, smartly dressed young men are running around with documents in hand trying to catch the attention of officials of the Registrar-General’s Department whose seal of approval officially permits business operations in the country.

Ordinarily, one would believe these young men are employees of the department but in reality they are not. They are middle men, popularly, known as ‘goro boys’, who take advantage of the ignorance of some applicants and the bureaucracy involved in the business registration process.

In the front office, however, frustrated applicants wait anxiously to hear news that documents are ready.

In front of one of the many cages, there is a shoving match between two clients over who came first. Tempers are high. A verbal brawl ensued…
The whole scene resembled the Makola Market, only that this place is without the customer calls and the airconditioner is busy kicking out the mid-afternoon sticky-hot air that participants in the Makola Market transactions have to endure. It is a daily routine.

It is this chaotic scene that the RGD wants to end, as well as help improve Ghana’s ranking on the annual World Bank Doing Business Report.

On the average, more than 300 people throng the department daily for business registrations alone with hundreds of others also seeking to register marriages, estates and Industrial Property Rights.

However, to improve its level of efficiency, improve turnaround time and cut middlemen out of its processes, the department is from (Monday, February 12), introducing an Electronic Queue Management System (EQMS), as well as a One Stop registration process which includes the Ghana Revenue Authority (GRA) and the Social Security and National Insurance Trust (SSNIT) at its front office on a three month pilot basis. The service from the Accra Metropolitan Assembly who would issue Business Permit Licences after the registration of businesses would be rolled out, as well as part of the One Stop Registration Process before the end of the three-month pilot project.

The newly refurbished front office of the Registrar-General’s Department

“We have had a challenge with the number of clients who flood our front office in the sense that everybody wants to be attended to at the same time and they don’t respect the lines of who came first in order of priority, “the Registrar -General, Mrs Jemima Oware, told the Daily Graphic.

With financial and technical support from GCNet, the department has had its front office refurbished and an EQMS and LED directional signs installed to seamlessly control the workflow process.

Explaining the workflow process, she said once a customer entered the front office, he or she would pick a ticket, depending on the service required.

“Once you come in, there is someone who will take you through the various steps, help you pick a ticket tied in with the service you require, have your document vetted and verified by company inspectors, captured and paid for and most important at the end of it all, ‘’ leave the document with the bank.

It would not be like in the past when you have our customers and even ‘goro boys’ holding their application documents, all over the back offices telling people ‘’my application is in your tray, approve it for me’’. This was so wrong.

“Your front office work stops when you get to the bank. Scheduled officers from the department would collect the forms from the bank, complete the process at the back office and send the completed forms to the collection point at the front office for customers to pick up’’.

She said the system would work like a visa process where applicants are given a specific date to come pick up their certificates and documents.

“The eRegistrar application would give you an SMS notification when it is ready, bearing in mind that with the timelines that we have already set for ourselves, we know that a business name can be registered in a day and a Limited Liability Company completed within two days so to round everything off, including batching and all that we said for business names it would take two working days and Limited Liability Companies, three working days,” she explained.

In a department noted for being filled with middlemen who would cut corners and use their acquaintance with officials to do their business, Mrs Oware said the system would no longer tolerate that.

“We have introduced a securitised hologram to be placed on all documents being processed through the front office. Without this hologram, we would not process any document at the back office. This is to ensure that everybody goes through the front office. So you won’t have these goro boys going to people in the back offices to process their documents for them” she added.

She said she was hopeful that by the third month of its implementation, the project, which is at pilot stage in Accra, could be scaled up after all anticipated hiccups had been dealt with.

Last year, Ghana dropped 12 points on the World Bank Ease of Doing Business ranking. Countries including Mauritius, Rwanda, Morocco, Botswana and South Africa are up in the top five in Africa, leaving Ghana at 11th on the continent and 120 on the global stage in the survey which covers 11 areas of business regulation including, starting business, dealing with construction permits, getting electricity, registering property, getting credit, protecting minority investors, paying taxes, trading across borders, enforcing contracts and resolving insolvency, as well as some aspects of the labour laws.

With a good performance in the Doing Business index increasingly becoming a government priority, the government last year, following the country’s slip down the ladder, formed a team led by the Trade and Industry Ministry to promote a more friendly business environment and ultimately ensure that the country got a good rating from this year.

The cubicle allocated to SSNIT and AMA

As part of measures to create a one stop shop for business registration, Mrs Oware said SSNIT and the AMA would now be an integral part of the business registration process at the department as moving from one office to the other for the same purpose made things cumbersome.

“Four years ago, the GRA joined us, this year, SSNIT and AMA are coming on board. All those steps you have to go through affects the rankings. The RGD being the first port of call for all businesses in Ghana, it is committed to use its front office to provide the services that our clients would have to seek in all those other offices. That is why we thought of bringing in the two institutions with the support of the Ministry of Trade,” she said.

Already, cubicles have been created for the two institutions to start work in the RGD building with the Registrar-General optimistic that SSNIT would join the process on February 12, 2018.

In December 2015, the RGD launched its online registration portal to make the business registration process less cumbersome. In that year, the department registered 86 businesses and it shot up to 2,811 in 2016. The system which was re-launched last year recorded 12,406 registrations.

Mrs Oware observed that, although, the online registration was moving smoothly, it could still be better as there were people who still wanted to depend on the goro boys to register their businesses for them.

For applicants who still had difficulties in using the online portal, she said “We also have an online cage where we have dedicated staff who would help you to register online, scan documents, pay and leave. You can do it yourself in our Department or in your own home at www.rgd.com.gh.”

“We are trusting that before the end of the year, in line with the government’s policy, all businesses should be scanning their documents to us and not go through traffic to come and be in queues to have their businesses registered. This is to ensure that most businesses register online. The portal is up and running, the payment platform is also running.

“ We are advising that clients use the online system. We have communicated to the banks, and you can get the electronic key from our department to validate the genuineness of the digital certificates that would be brought to their banks for account opening,” she said.

Mrs Oware hinted that by the end of the year, it was going to be more expensive for applicants to walk in and register their businesses as it would be cheaper for you to stay at home and register than inside the offices of the department.