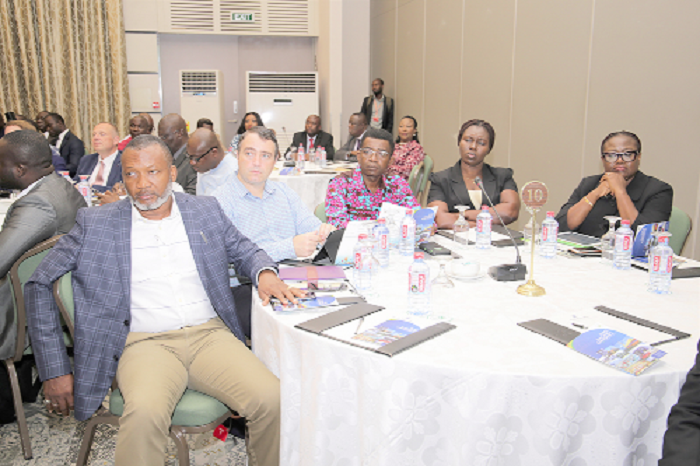 A section of key stakeholders at the conference Follow @Graphicgh

The stakes are high to improve trade among countries across the world and governments encouraged by the Trade Facilitation Agreement (TFA) initiatives have introduced reforms to eliminate bureaucratic procedures in the trade supply chain.

Ghana, in its quest to become the preferred trade hub within the West African sub-region, is leaving no stone unturned to cash in on this global trend which if properly coordinated could reduce joblessness among young people and further enhance economic growth.

Port reforms to eliminate rigid processes, reduce corruption and create a more efficient border administration process said to be key to enhancing the country’s trade competitiveness, and the Vice-President, Dr Mahamadu Bawumia, is seeking to drive such reforms at Ghana’s ports.

At a recent port efficiency conference organised by his office in Accra, the Ghana Institute of Freight Forwarders (GIFF), the Association of Ghanaian Industries (AGI), the Shippers Authority and other relevant stakeholder bodies had maintained that technological developments in ports by way of electronic data interchange platforms or single windows were a sure way to increase efficiency and sustain the country’s competitive edge in trade facilitation.

The Vice-President, after the programme, announced a three-pronged policy of ensuring paperless processes, joint mandatory inspection on containers by all relevant agencies and the removal of customs barriers, which are to take effect from September 1, 2017.

The paperless project initiative embarked on under previous regimes saw the birth of the Ghana Community Network Services (GCNet) and subsequently the Ghana Single Window project being implemented by West Blue Consulting (WBC).

These had, however, failed to achieve the necessary positive outcomes as importers and agents on a daily basis continued to queue at the customs documentation centre (popularly referred to as the long room) with documents in hand to either negotiate for value reduction or obtain a customs’ endorsement to clear their cargos although these processes were said to be available online.

At the conference, West Blue and GCNet each presented their projects and highlighted various challenges.

But can the directives be complied with within three months in the wake of challenges enumerated by players at the conference and the seemingly turf war between the two providers?

One may ask, which of these two agencies would execute the paperless regime considering the anxieties of a possible job takeover?

The Secretary General of the Ports Management Association for West and Central Africa (PMAWCA), Mr Michael Luguje, was of the view that a single integrated electronic platform by the two providers was the only way to go.

He pointed out that it was in the national interest to focus on the goal to digitalise all trade, goods clearance and payment processes in order to facilitate trade.

Mr Luguje expressed regret at the setting up of the two providers under two separate ministries, “but since both ministries are cabinet members and under the Presidency, they should be compelled to federate their efforts in the national interest”, he told the Daily Graphic from his base in Nigeria.

“It is my layman’s belief that West Blue and GCNet can find a common ground to work together while still safeguarding their respective shareholders’ interest,” he said.
“Government needs to take a decision, give a directive for integration and the two will work out the feasible modalities,” Mr Luguje added.

The joint inspection of containers is aimed at eliminating individual agency inspections which were also said to be a contributory factor to delays in clearance procedures.

Mr Luguje, who hailed the directive, however, questioned which among the organisations would be the lead agency that would bring together the individual players to enforce the joint inspections.

“Have we conducted a detailed analysis of the time per inspection and what percentage of total cargo clearance time the inspection time represented?” he queried.

“We need to measure how much time each individual inspection takes and how the joint inspection should be done to save time. If we cannot find a common ground, there is no point rushing for a solution only to end where we started from,” Mr Luguje advocated.

On the directive for the removal of customs barriers along transit corridors, Mr Luguje pointed out that apart from Customs, the Police Service and the Ghana Highway Authority (GHA) conducted checks on the corridors, since there were a couple of weighbridges that were under the control of the authority.

As such, he said, it would be necessary for the directive to be expanded to cover the police and the agencies involved in the management of the weighbridges. 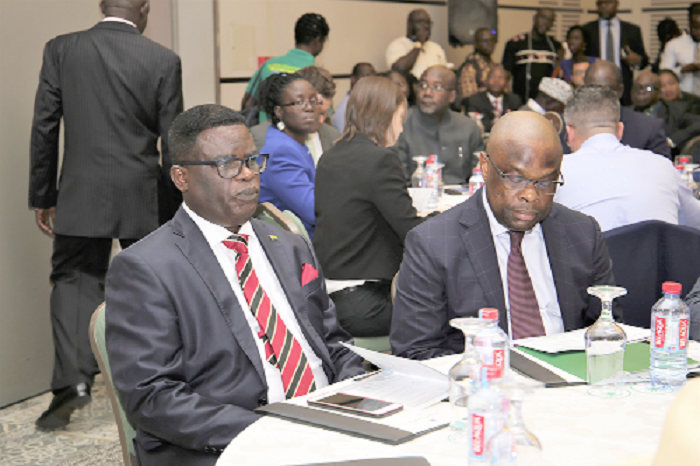 Dr Kofi Mbiah (left), CEO of the Ghana Shippers Authority, at the forum

Likewise, Mr Luguje, stressed the need for truck drivers to be made to discontinue overloading their trucks to warrant delays at the weighbridges.

Also, documentations on their cargo, he said, ought to be accurate at all times to avoid suspicion and extra scrutiny by the police and customs while in transit.

“We also need to make sure recalcitrant truck drivers are punished without fear or favour when found guilty of an offence. Similarly, we need to ensure that transit cargo shippers, their freight forwarders and truck drivers will not divert transit cargo into local market to evade customs duties,” he advised.

He maintained that, for the directive to achieve its purpose, all players along the corridor needed to play their rightful roles in sincerity; “and if any player fails, commensurate sanctions should be imposed without fear or favour.”

Mr Luguje emphasised that for the directives and reforms to produce the necessary results, the entire process of port cargo clearance and corridor transportation ought to be carefully researched prior to the September 1 implementation.

The research processes, he said, must detail each process and the agencies involved, as well as quantify the process stages, paper work needed, time consumed at each stage and related cost for each stage/process.

Such a study, he said, could paint a vivid picture of the entire clearance chain so it would assist the government to take an informed decision as to which components (stages, documentation, agency interventions, etc.) of the cargo clearance process could be merged and what value such a measure would generate in terms of monetary value or time-cost savings.

Mr Luguje opined that data required to produce a baseline study document had already been gathered at various stages by GCNet, West Blue, Ghana Ports and Harbours Authority (GPHA), GIFF, Customs Division of the Ghana Revenue Authority (GRA), the Ghana Shippers Authority, among others. However, each of those agencies, he said, would have applied varying methodologies and conducted their studies at different times.

The key objective of all agencies in the research project, he suggested, should be ‘shared responsibility, convergence of efforts and expertise to promote trade facilitation in the national interest.

Representatives of GCNet, West Blue, GIFF, as well as officials of Customs and GPHA taking participants through the various trade chain processes

“Should the research be conducted, the findings can point out components that could be completely expunged and the value such measures will generate,” Mr Luguje said.

He also maintained that once the baseline document was produced with smart objectives and targets set, the government would then direct all agencies, public or private, to work towards full implementation.

“Based on this, once a decision is made, there will be total conviction that the decision is feasible, since it will address a concrete bottleneck, and the resultant added value is quantifiable and measurable. In this way, it will be easy to set timelines and target results to be achieved. We could then assign responsibility for supervision and monitoring of the implementation of the directives,” he highlighted.

“Government in this regard will also have to communicate clear and deterrent sanctions against non-compliance or non-performance. The monitoring and evaluation of compliance must be done either by an independent agency or by an inter-ministerial (Transport, Trade, Finance) body headed by the ministers themselves,” Mr Luguje suggested.