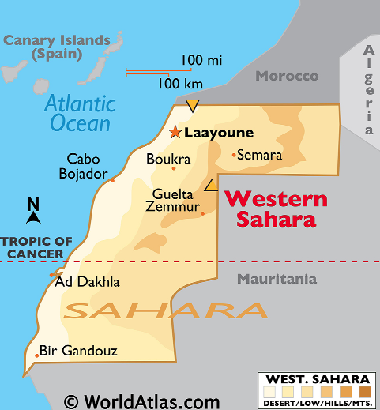 The Daily Graphic published in its Thursday, February 18, 2021 issue a statement by the Minister of Foreign Affairs of the Kingdom of Morocco under the headline: “Sahara dispute, American Proclamation Brings us Closer Solution.”

To avoid the confusion of readers, the Embassy of the Saharawi Republic provides the following clarifications.

The Western Sahara issue is not a simple ‘dispute’, but an unsolved problem of decolonisation which has been pending at the UN since 1963, and treated yearly by the UN Commission of Decolonisation as such.

Morocco is free to publish all kinds of statements, but that cannot change the nature and essence of the problem of Western Sahara.

On December 10, the outgoing US President, Donald Trump, announced that an agreement between Morocco and Israel on the normalisation of diplomatic relations had been reached by mediation of his administration.

As a quid pro quo for the deal, President Trump also made a proclamation declaring the recognition of “Moroccan sovereignty over Western Sahara”.

That regrettable, unilateral and hasty decision violated the UN charter and resolutions, including the Security Council resolutions that the US had approved.

The proclamation also distances the US from its traditional policy regarding Western Sahara, breaks a long-standing position on the right of self-determination that is embodied in the US Constitution and negates one of its cardinal principles.

Americans, including 27 Republican and Democratic senators, and others like James Baker III, John Bolton and Christopher Ross have slammed Trump’s declaration to trade off the rights of the Saharawi people.

The framework of a lasting and just solution for the Western Sahara problem was clearly established by the UN/OAU settlement plan, which was unanimously approved by the UN Security Council (Resolutions 658 (1990) and 690 (1991)).

The United Mission for the Referendum in Western Sahara (MINURSO), deployed in the territory, could not fulfil its mission because of the denial by Morocco of its initial commitment.

This is the true reason behind the current deadlock and the recent breaking of the ceasefire.

All UN General Assembly and Security Council resolutions on Western Sahara are based on the right of the Saharawi People to self-determination.

Western Sahara cannot be seen as “southern provinces of Morocco” because it is an illegally occupied territory by Morocco.

All agreements signed by Morocco with the European Union (EU) were declared by the European Court of Justice as not applicable on Western Sahara because the latter was a different country from Morocco.

The Extraordinary Summit of the African Union, on Silencing the Guns, held on  December 6, 2020 approved the following resolution:

“The Assembly of the Union expresses deep concern over the escalating military tensions between the Kingdom of Morocco and the Saharawi Republic that have developed in Al-Guergarat, the narrow Buffer Strip in Western Sahara, leading to the violation of the 1991 Ceasefire Agreement, including the military agreement Number 1 and the unfortunate resumption of the war; in this context, calls for the revitalisation of the Troika Mechanism in accordance with the Decision  Assembly/AU/Dec. 693 (XXX) and REQUESTS the Peace and Security Council, at Heads of State and Government level, to make the expected contribution of the African Union in support of the efforts of the United Nations and in line with the relevant provisions of its Protocol, to engage the two parties, both of whom are Members States of the AU, to address the unfolding situation in order to prepare conditions for a new ceasefire and to reach a just and durable solution to the conflict, which will provide for the self-determination of the people of Western Sahara in line with the relevant AU-UN decisions and resolutions and the objectives and principles of the Constitutive Act of the African Union; furthermore, Calls on the United Nations Secretary General to appoint a Special Envoy for Western Sahara.”

The Moroccan proposal of autonomy was still born and cannot be equated to a case of decolonisation and self-determination like Western Sahara.

The Saharawi side gave Morocco and the international community a 30-year opportunity to solve the problem.

Unfortunately, they have not taken advantage of it. Therefore, no one can give us lessons on the commitment to peace and justice.

For the Saharawi people who have been fighting for more than 48 years, Trump’s proclamation was nothing more than a wet firecracker. He tried to offer something that did not belong to him and Morocco had no right to take it.

Certainly, the latter desperately intends to sell the bear’s skin before hunting it, but the amusing side of the story is that the supposed hunter is being hunted.

By the Embassy of Saharawi Republic