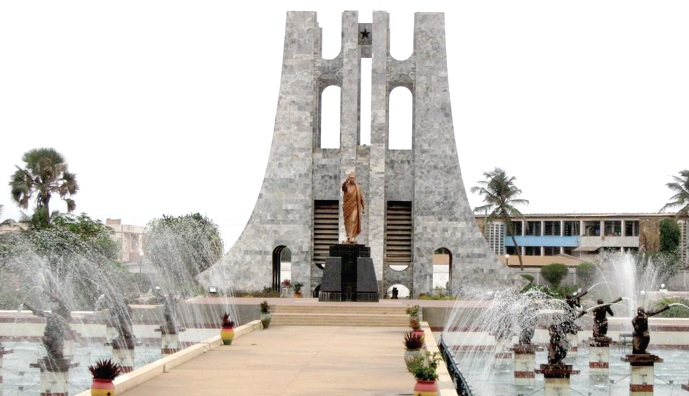 Ghana’s first President, Osagyefo Dr Kwame Nkrumah and his colleagues stood at the Old Polo Grounds in Accra on the eve of Ghana’s political independence, to declare the country’s freedom from British colonial rule.

Together with Comrades Kojo Botsio, Komla Agbeli Gbedemah, Archie Casely Hayford and Krobo Edusei, all clad in their northern smocks and hats, emotional and before a huge crowd which had travelled from the entire country to witness the memorable occasion, Nkrumah said “Ghana is free forever”.


Indeed, when the representatives of Queen Elizabeth and Lord Listowel, the then Governor General, Kwame Nkrumah and others gathered in the Old Parliament House to formally mark the country’s independence, the Old Polo Grounds accommodated a huge crowd of people who had gathered in Accra to participate in the historic activity.

Today, the place is known as Kwame Nkrumah’s Mausoleum and has become a tourist destination for Ghanaians and those in the diaspora.

The idea of erecting a monument in honour of Kwame Nkrumah dates back to 1972, when the African Students Union sent a memorandum asking the Government of Guinea, then under President Sekou Toure, to send the mortal remains of the Ghanaian leader to Ghana only if the military leaders at that time denounced coup d’état and re-erected the statue of Nkrumah which was destroyed during the 1966 coup.

Although the remains were later returned to Nkroful, his birthplace, it was not until 1992, that the image of Nkrumah was restored on the Old Polo Grounds during which the erstwhile Provisional National Defence Council (PNDC), decided to build the Kwame NKrumah Mausoleum.

The mausoleum is located to the west of the Ghana Arts Centre and the offices of the Accra Metropolitan Assembly. It is also directly opposite the Old Parliament House, which now houses the Commission of Human Rights and Administrative Justice (CHRAJ).

The memorial park covers a total of 5.3 acres and contains two main edifices; the museum which is subterrean and the mausoleum which provides the front to the bronze statue of Nkrumah.

The park itself is an attractive masterpiece with futuristic creation. There are two springs of water on either side of the pavement or walkway. It has seven bare chests, squatting statuette flute blowers, and literally blowing springs out. In Ghanaian culture, flutes are blown to welcome very important dignitaries and on special occasions.

Therefore, by symbolism, it can be concluded that all visitors to the park are seen as very important people and there are no second-class citizens of Ghana and for that matter Africa.

In addition, the two main features of the memorial are the museum and the mausoleum. The mausoleum is the place where the mortal remains of Nkrumah have been interred for the third time in the past 39 years.

The body was first buried in Guinea before being brought to Nkroful and later to the mausoleum, its final resting place.

The structure resembles swords which have been turned upside down, signifying peace, perhaps. Others also view it as an uprooted tree, signifying the unfinished works of Nkrumah.

The museum, on the other hand, accommodates the personal belongings of Nkrumah. These include books he wrote, photograph archives and official photographs.

The photo collection features pictures of Nkrumah with several renowned leaders of his time. Some of them are; Pope Pius XII, Queen Elizabeth II and President John Kennedy of the United States, just to mention a few.

Also in the museum is the metal coffin donated by the people of Guinea when the remains of Nkrumah were returned from Romania to Guinea and later to Nkroful.

In the park it is the bronze statue of NKrumah clad in cloth with his hand symbolically pointing forward. It stands at the same place that NKrumah stood to declare Ghana’s Independence from British colonial rule on March 6, 1957.