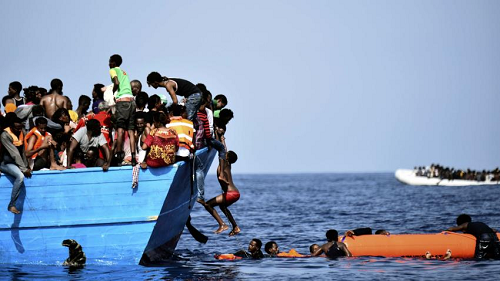 I have tried to imagine, but with no clue, as to what would drive any immigrant to cross the Mediterranean Sea with all the perils to go to Europe, especially in times like this? Have they not heard? Have they not seen pictures on television?

What could be wrong with some people is the question that threw back at me as I read the Inside Africa story reported by BBC and captured in the Daily Graphic of Monday, August 24, 2020. It was a story regarding some immigrants rescued, while crossing the Mediterranean to seek greener pastures.

Per the report, 97 people, including 28 unaccompanied minors, were rescued from an overcrowded rubber boat that was drifting in the Mediterranean, 30 miles off the coast of Libya on Sunday, August 23. Those rescued were reported to have been exhausted and dehydrated.

Were these immigrants calling the bluff of COVID-19? Otherwise, who would want to leave the African sun, with a relatively lower rate of coronavirus infections and migrate to the Northern hemisphere, where the virus has been brutal with fears of its return this winter?

The same BBC report captured another sad news put out by the UN refugee agency (UNHCR) that at least 45 migrants and refugees, including 5 children, died in a deadliest recorded shipwreck off Libya four days earlier.

According to a coalition of charities, including Medicins Sans Frontieres and under the banner United4Rescue, more than 300 people are known to have died trying to cross the sea from Libya to Europe in this year of pandemic. The actual figure is believed to be much higher. Many questions need answers, really.

With all that is going on around the world, where exactly are these immigrants heading to and for what reason? Are they so oblivious of what is going on in the world since the beginning of this year?

Did they not hear about the outbreak of the pandemic the world over? It definitely cannot be that the pandemic is wiping their citizens off the surface of the earth and so they are running to a safe haven.

Who would feel pity for anyone caught up in this kind of boat disaster? Unfortunately, these are some of the stories one hears and instinctively, begin to give up on young African immigrants who flee from their countries to foreign lands to do menial jobs.

The minute they get there and things go bad for them, they mass up and pressurise their governments to use the tax-payers money to help evacuate them. Who sent them in the first place?

At a time when the world is being threatened severely with an atrocious virus and governments are counting their economic and social costs, these immigrants are visualising greener pastures ready for them.

Who will tell them that COVID-19 has spoilt their chances, if indeed there are any chances waiting for them in today’s Europe. The fact is that they continue to take these risks because somebody listens to them and continue to help them out for the reason of human rights and the like. Would anyone have ears for them in this era, even if they survive the perils at sea?

International human right activists, together with countries where the immigrants are originating as well as the appropriate UN Agencies, may need to get harder on those agents who go promising to take the immigrants to lands flowing with milk and honey. After all, if there are no boats available, there would be no sea crossing. Settling immigrants certainly would not be uppermost on any country’s mind in this pandemic era.

Instead of parting with hundreds of dollars to agents who pack them on dangerous boats and send them to face dangers on the Mediterranean, these immigrants could be taught to do a lot with their monies. They could be helped to create their greener pastures back home with the love and support of families close by.

As coronavirus has come to stay, travelling is going to be a lot more cumbersome than what September 11, 2001 presented the world with.
Many, who have the choice would rather stay put because of the uncertainties of catching or spreading the disease.
Why are these immigrants bent on putting their lives and that of others at risk even in the face of a pandemic?