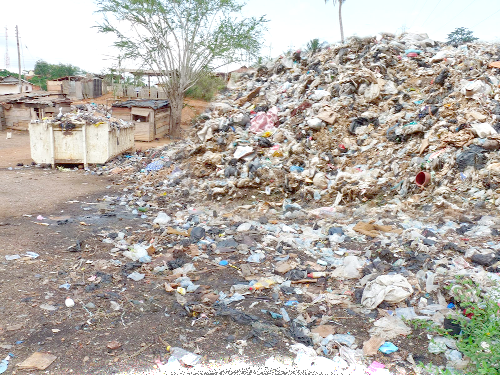 The country has a poor waste management system
30.5k Shares

The menace of filth which has engulfed the entire nation is seriously threatening and becoming a potential health hazard in the country. A situation such as this can freely be referred to as a disaster of man-made origin. Many fruitless attempts have been made with the hope to curb the impending danger hovering over the country.

The measures included health education through electronic and print media, lectures and announcements in churches, mosques and human gatherings, such as funerals and weddings.

The situation, unfortunately, remains unchanged despite the afore-mentioned attempts and the filth continues to mount up. The present monthly town cleaning exercises, therefore, became necessary to replace the previous measures. Soon, the public lost interest in the exercise and virtually abandoned the idea as the momentum slowly started dying down.

The exercise under discussion later assumed a form of a ‘’show’’ whereby dignitaries dressed up in their working gear and members of different political parties, as well as some identifiable groups dressed up in their beautiful colours to mark the occasion. Truly, this became a panoply rather than a serious business to boost their ego of patriotism.

The silt and rubbish from the gutters were heaped onto the walkway and left there. Gradually, the waste finally found itself right back into the gutters awaiting the next mass working day. The phenomenon, thus, became cyclical in character.

The apparent failure of the project was partly due to the apathetic attitude of the people towards the work itself, lack of proper organisation, clear cut job descriptions and improper laid-down division of labour. Certainly, it is quite evident that the abysmal failure of the  sanitation exercise should not deter us from looking for an alternative.

As a matter of urgency, where education and friendly persuasions have failed, a ruthless but efficient approach must be sought  if we were to survive the imminent catastrophe. Enormous as the task involved may seem, the health aspect of it to the nation unimaginably outweighs all the odds the process may take. It must be declared with all the emphasis it deserves that the time has now come when Ghanaians must stand up to the seemingly difficult challenges of ridding ourselves of the ever- growing menace.

The project calls for the participation of some stakeholders or organisations such as the Police, the Judiciary, the metropolitan, the municipal and the district assemblies, as the well as the manufacturers of cellophane sheets, plastic bottles and plastic containers of all sorts, paper industries, restaurants etc, will not be left out.

While the police shall assist in enforcement of the law, the judiciary may create enough lay magistrate courts to handle sanitary offences. In the cases of offenders who may not be in a position to settle their fines, they should be made to perform any town cleaning related exercise (communal labour) as may be prescribed to them. This brings to mind the achievements of Salifu Amankwah at the Kwame Nkrumah Circle Holy Gardens. The man single-handedly was able to keep his area of operation cleaner than any part of Accra, if not the entire country. Salifu’s success depended upon his strict or regimental observance of the instructions given him. His duty conscious, coupled with no nonsense attitude towards recalcitrant litter bugs sent a clear and powerful signal to the people which positively yielded beneficial results.

One may ask why people dreaded at that time to litter around the area under discussion but had the courage to throw rubbish of all sort on the ground just a few metres away from the same place.  As Ghanaians, can’t we do things right ourselves without being forced to? Though, Salifu being a soldier then, used an iron fix to accomplish his desires, it does not necessarily follow that we use the same modus operandi to achieve the same goal. Conditions such as this, epitomise how useful or beneficial sparing use of force can sometimes be. As long as people continue to choke up smaller drains and bigger gutters, and as long as this will surely cause perennial floods to drown innocent people, we should not hesitate to embrace any measures, no matter how harsh they may be, in order to eliminate the practice.

Let us take a short glance at what happens in some places such as Russia and other European countries. Recruits from different forces like the Army, Police, Immigration, Fire Service and Prisons, together with candidates of national service are used to construct roads, railways, schools etc. No professional, be he engineer or a doctor, a lawyer or an economist and, for that matter any worker, can be employed in any government institution or a private facility without having fulfilled the above mentioned requirements. This is a clear indication that such group of people can be potential candidates for the envisaged project under review.

It might not only be of great necessity but of great use to the nation, if people with interest and better ideas, skills and some degree of technical knowhow, as well as men of law join hands together to discuss this all-important topic a little further.

The writer is  a former Director, Police Hospital and recent Past Ghana Ambassador to Russia.