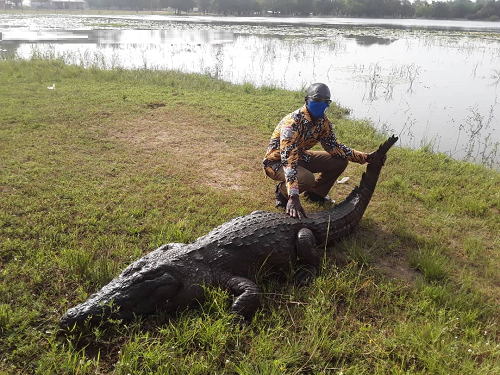 The reporter holding the tail of a crocodile
30.5k Shares

Paga in the Kassena Nankana West District in the Upper East Region has been put on the World Tourism Map for decades because of crocodiles. Indeed, the town's contribution to tourism, through these reptiles is legendary.

However, some visitors including tourists, crocodile pool attendants and tour guides have stressed the need for a number of measures to be put in place to help sustain the contribution of Paga to tourism.

These measures include the modernisation and reopening of the Paga Airstrip to increase visits to the town's crocodile ponds and the development of all the ponds, particularly the Chief Pond which is strategically located off the main Navrongo-Paga border road.

It has also been suggested that the development of the Chief Pond which receives almost all the tourist arrivals should be properly fenced and desilted. Although the front view of the Chief Pond has a wall, the other sides lack fence walls hence the pond is prone to invasion by some other animals, particularly cattle that converge on the area to drink water from the pond. 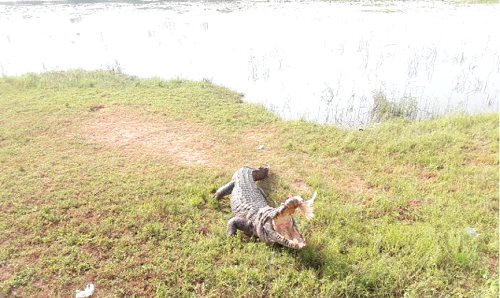 The crocodile fiercely grabs its prey by its snout

According to the Regional Director of the Ghana Tourism Authority (GTA), Mr Henry Yeledour, Paga is blessed with tourism sites such as the crocodile ponds, the Paga border and the Pikworo Slave Camps, among others, that must be developed to sustain tourist inflows.

He indicated that the GTA had planned, in the coming months, to facilitate the establishment of visitor receptive facilities at the various tourist sites in the area, embark on tree planting exercises to improve on the environment around the tourist sites, and provide some form of fencing around the sites to check encroachment on the facilities.

Before the coronavirus (COVID-19) era, the Chief Crocodile Pond received between five and 10 groups of both domestic and foreign tourists each week aside from the individuals who visited.

However, the Senior Tour Guide for the Chief Crocodile Pond, Mr Issahaku Mahama, told the Daily Graphic that between March and September this year the site recorded low patronage.

“During the period, we sometimes came to sit here for long hours and throughout the day but no one came to visit the Chief Pond," Mr Mahama lamented.

One of the crocodiles finally approaches after being called out

He stated that on Monday, October 26 (the day the Daily Graphic visited the site) it was only this reporter that visited the site at about 3:30pm, pointing out that before the COVID-19 era, sometimes as early as 6:00am on a typical busy day, the site received visitors.

Mr Mahama said the barbed wires used to fence portions of the Chief Pond had been destroyed by cattle which were usually brought in from Burkina Faso and quarantined nearby.
“Only the front view of the Chief Pond has been fenced leaving the other sides without a fence wall. Additionally, the pond also needs to be desilted, while the environment around the pond needs to be improved and made more conducive and attractive,” Mr Mahama observed.

In Paga, there are three ponds or pools that are habitats to these crocodiles — the Chief Crocodile Pond located off the main Navrongo-Paga border road, the Zenga Pool and the Nania Pool.

The Chief Pond is the most visited by tourists because of its strategic location and it is clearly visible to any visitor moving along the Navrongo-Paga border stretch of the road. The Chief Pond has a pool size of about two square kilometres and it is believed more than 200 crocodiles of various sizes are living there.

It is also believed that some of the crocodiles in the pond are between the ages of 70 and 100 years old. It is also estimated that about 1,000 crocodiles may be living in all the three pools or ponds.

According to tour guides, the crocodiles usually migrated from one pond to the other and so it was difficult to get all of them in just one pond.

The Zenga Pool is the second oldest crocodile pond after the Chief Pond while the Nania Pool is populated mostly by younger crocodiles which are not up to the stage of being called out for visitors.

The West African crocodile inhabits much of West and Central Africa, from the east to South Sudan and Uganda, and south to Democratic Republic of the Congo. 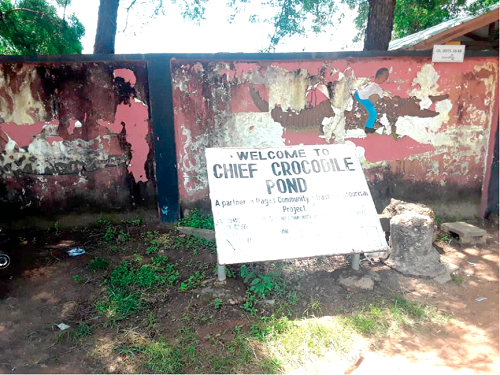 Welcome signage not in a so welcoming environment

Although the West African crocodile is known to be less aggressive than the Nile crocodile, several attacks on humans have been recorded, including fatal ones.

In Paga, people who live in close proximity to West African crocodiles revere them and protect them from harm. This is due to their belief that just as water is essential to crocodiles, crocodiles are essential to the water, which would permanently disappear if they were not there to inhabit it.

The reptiles in the Chief Pond have become popular among tourists and the pond now depends on tourism which ensures the population of crocodiles remain fed and healthy.

The crocodiles are so tamed that local children swim in the pond alongside the crocodiles without being harmed.

Usually before a visitor enters through the front gate to meet the crocodiles, he or she is required to pay not less than GH¢22 for a fowl and depending on the number of visitors, the number of fowls purchased could be increased. Ideally each visitor should buy a fowl. This fowl is used as a bait to lure the crocodile to the shores of the pond.

Interestingly, a pool attendant who has over the years developed the skill of calling out the crocodiles then tells the visitor not to go in front of the crocodile’s snout as it is dangerous.

That procedure might look scary but it is usually calm and peaceful since these reptiles don't harm their visitors.

After the visitor is satisfied with the fun, the pool attendant then throws the fowl and within a second, the once tame crocodile turns wild and grabs the fowl with its snout and a loud noise is heard (like the clapping of the hands) as the reptile shuts its snout and instantly the fowl is lost in its belly. It stays for a while longer and then slowly creeps back into the pond.

The people of Paga believe they have special connections with these reptiles hence there is mutual respect between humans and the reptiles. It is a taboo to kill, harm or eat crocodiles in the area.

There are two major historical accounts centuries ago that explained why crocodiles in Paga were sacred and revered.

In one of the accounts, a famous hunter at Kampala in present day Burkina Faso, known as Nave went out to hunt in the bush one particular morning.

With his hunting dog following him, Nave clutched his wooden bow and hanged his quiver of poison tipped arrows over his shoulder.

However, events did not go as planned as he pursued an antelope into an Aardvark hole. The Aardvark (a medium-sized, burrowing, nocturnal mammal with a long pig-like snout, which is used to sniff out food and is native to Africa), got frightened and escaped through the entrance of the hole but covered it up with sand and trapped Nave inside the hole.

The antelope Nave was pursuing escaped through another route but the hunter (Nave) could not see it as the hole was dark. In despair, Nave sat on the floor, but back at home Nave's parents were worried because his hunting dog returned home without its master.

On the dark dusty floor of the Aardvark hole, Nave laid prostate as his lips were dry while his skin turned pale as a result of lack of food and water. He became unconscious but there was a crocodile that was hiding in one of the cool chambers of the hole and watching all that Nave was going through.

Croc to the rescue

The Crocodile then crept to Nave and used its tail to brush the dirt off the hunter's chest. He regained consciousness instantly and rose to follow the crocodile out of the hole and then to a nearby pond.

Nave quenched his thirst from the water in the pond and filled his water container with enough water to last the journey back home. He recounted his experience with the crocodile and believed that the crocodiles had been following him on his hunting adventure from Kampala to Paga in the Upper East Region where Nave later settled.

He was surprised to see many crocodiles inhabiting ponds in Paga similar to the ones he found at Kampala, his hometown.

Nave, therefore, reaffirmed his ancestors’ vow that nobody should kill and eat the crocodiles. It is still believed that if a crocodile dies in Paga, the death of one of the residents is imminent. The souls and spirits of the Paga people are therefore linked to that of the crocodiles.

Mr Mahama, who corroborated the belief systems of the Paga people indicated for instance that anytime the female reptiles wanted to lay their eggs and hatch them they crept out of their ponds at midnight, crossed the main Navrongo-Paga border road and entered the communities to lay and later hatched their eggs.

“When they finished hatching, they again picked the hatchlings in their snouts back into their respective ponds around midnight,” the Senior Tour Guide intimated.

Crocodiles are large semiaquatic (growing equally well in or adjacent to water) that live throughout the tropics in Africa, Asia, the Americas and Australia.

Crocodiles tend to congregate in freshwater habitats such as rivers, lakes, wetlands and sometimes in brackish water and saltwater.

They are carnivorous animals, feeding mostly on vertebrates such as fish, reptiles, birds and mammals, and sometimes on invertebrates such as octopuses, snails, slugs and cuttlefish. They also feed on crabs, lobsters, crayfish, shrimps among others.