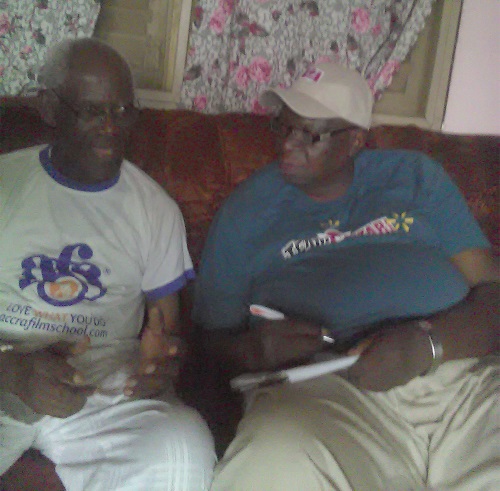 The writer (right) and Joe Lartey

When it comes to running commentary in this country, be it political or social, especially football commentary, the venerable Joe Lartey stands tall among his peers. He certainly is one of the very best to have come out of this country.

Recently, precise on June 6, 2017, good old Joe Lartey turned 90. Friends and well-wishers from Atinka Fm, Ghana Broadcasting Corporation (GBC) and Viasat One organised parties for him to celebrate the occasion. The Prudential Bank, Accra Branch, his bankers, also sent him birthday presents. So did other friends and family members.

I had foreknowledge that my good old friend was going to hit 90. Our mutual friend, Ato Amoaning Annan, also a journalist and currently lecturing in Communications at the Islamic University, Adjiringano, hinted me about the forthcoming event. But somehow, because of communication lapses, I could not be at any of the occasions. Ato also missed out.

As a result of my inability to be present at any of his birthday parties, I decided to visit him last week to congratulate him on this important milestone and to wish him well.

The visit offered me the opportunity to know more about Joe and to ask probing questions that led me into his past.

I realised I didn’t know anything about him apart from the fact that Joe was a celebrated commentator during his days at GBC many years ago. I got to know the other side of him which I thought I should share with my readers today.

I met Joe for the first time one on one in, of all places, Lagos, Nigeria through Ato Annan, when I was domiciled there. I was based in Lagos then and working with the Daily

Times of Nigeria at Ikeja and I used to visit Ato at his residence at Ajao Estates, a suburb of Lagos.

On one of my visits sometime in 1990, Ato told me he was going to see Joe Lartey who was also living at another part of Ajao Estates. He told me Joe was getting ready to return to Ghana after 12 years stay in Nigeria, working with Radio Nigeria, officially known as the Federal Radio Corporation of Nigeria (FRCN).

I agreed to go with Ato to see Uncle Joe, as we used to call him. It was my first time of meeting him and we instantly struck an acquaintanceship. I had heard that Joe was in Nigeria when I was working with Radio Kwara in Ilorin in 1985. I felt sad that he was returning home shortly after we had met.

However, Ato and I returned to Ghana a few years later, before the end of the millennium. Uncle Joe had then settled down, doing one or two things related to his profession as a broadcaster and public relations practitioner.

We got together once again, thanks to the common interest we both shared as journalists. We used to meet occasionally for small talk over drinks and food.

I must say that as the years rolled by, our meetings became few and far between, as we all advanced in age, with other things occupying our attention.

It was, therefore, a great opportunity to visit Joe last week at his residence at the Nkrumah Flats, Lartebiokorshie, which has been his home for more than 30 years.

I met him and his wife of 65 years, Emily Lartebia Adjei, whom he first met at Larteh Akwapim in 1949 when he went to teach there after coming out with his Cert “B” from the Winneba Training College.

Madam Lartebia did not fail to tell me poetically in the course of the interaction that she was Lartebia from Larteh who married one Mr Lartey from Accra and then became Mrs Lartey.

I got to know many things which many, including myself, did not know about this latest nonagenarian in town. To put it simplistically, Joe indeed is a man of many parts who had a boisterous beginning in life, which may have accounted for his longevity.

Joe was born on June 6, 1927 on Lutterodt Street in Accra to Emmanuel Akushey Lartey and Madam Emma Araakua Lartey, both long deceased.

Joe’s father started life as a lawyer’s clerk before he joined the civil service of the Gold Coast. He was transferred to Northern Nigeria to work in the colonial administration when the Gold Coast and Nigeria were under British colonial rule.

It was when the old man returned to the Gold Coast that Joe was born. At that time, the senior Lartey was working with the Treasury Department where he spent most of his working life.

Joe started his education at Accra Royal School around 1933. Not long after, his father was transferred to Cape Coast and he went with him. But before he could find another school, the old man took ill and was brought back to Accra.

In 1935, the senior Lartey was once again transferred, this time to Tamale. He decided to go alone because of the distance. A journey to Tamale from Accra in those days used to last three days. Joe, his younger brother, Hikiel, and his mother were left behind.

Unfortunately, a few months later, young Hikiel took ill and never recovered till he died. The old man had to come for Joe and his mother. Joe enrolled at the Tamale Middle Boarding School but the father sought permission for him to be a day student, since he fell sick often.

The senior Lartey returned to Accra in 1938 and Joe was sent to Government Senior Boys School at Kinbu to continue his education. He completed Middle School in 1943 and was admitted to Accra Academy in 1944. The Second World War was in its final stages and, according to Joe, he followed events at home by listening to the war speeches of the then British Minister, Sir Winston Churchill, on radio and read about the war from some magazines.

“This was also a period when there was no peace at home as my parents were always quarrelling, and that led to separation. After less than a year at Accra Academy, I left home for Takoradi to join the British Navy,” Joe told me.

After a few drills, Joe and his group were shipped to Freetown to receive further training at King Tom Barracks. The journey lasted six days instead of two since they had to make some detours to avoid enemy radar.

“It was when I was on my way to Freetown that I sent a message to my father that I was at Kintampo. The old man went to look for me to no avail. Later I told him I had joined the British Navy and was in Freetown. He was not a happy man but he accepted the situation,” Joe revealed to me.

In effect, Joe saw action during World War II. He said the navy in Freetown was responsible for the patrolling of the Atlantic Ocean between Gibraltar and Cape Town in South Africa.

He narrated how during one of their operations at sea in 1945 their ship HMS Kilkerrizie was torpedoed by the Germans.

“We were far away from Liberia and for four days we were made to drift in a life boat until we were spotted by a patrol boat that took us to Dakar in Senegal where we received medical attention. Out of 120 naval ratings, 69 died while 51 of us survived,” Joe reminisced.

Eventually, the war ended in 1945 and Joe and his group were demobilised in April 1946. He returned home a highly disciplined man even though only aged 20. He was reunited with his father whom he found living alone on Lutterodt Street. The father was, however, impressed with Joe’s development and remarked that he did not know the navy could make men out of boys.

There was a special resettlement package for those discharged from the British Navy. He first got a job as a clerk at the Accra Town Council, working under the Town Clerk Major McDougel. Joe then pursued a course on his own with Wolsey Hall to prepare for Cambridge Certificate (O’Level).

As part of the resettlement package, Joe was given a scholarship to train as a teacher. He did the Cert “B” at Winneba Training College, passing out after two years. Because of the Cambridge Certificate he obtained from Wolsey Hall, he was able to do the Post Cert. training at Wesley College in Kumasi.

At various times, for five years, Joe taught at Larteh, Kwanyarko, Swedru, Nyarkrom and Accra up to 1961.

He joined GBC in 1961 following a recommendation from an old mate from Accra Academy, Boso Kpohonu, who had gone on to graduate from the University of the Gold Coast with a B.Sc and was the Head of Research at GBC.

It was at the Sports Department that Joe flourished as a commentator. It was the way he and Festus Addae handled commentary together that the term “over to you Joe Lartey” became popular. Any time Festus was handing over to Joe, he would use the expression.

Unfortunately, out of frustration, he left GBC in 1973 because he was not promoted for eight years following clashes with Charles Assinor, who always stayed at Aburi while work was going on.

Joe joined the Food Distribution Corporation in 1973 but left in 1978 to go into private practice. Joe was also involved in trade unionism while at GBC and for six years was divisional secretary of the Public Service Workers Union, directly working under Kwesi Pratt Snr, the General Secretary and father of Kwesi Pratt Jnr.

After 1978, Joe was involved in the activities of the People’s Movement for Freedom and Justice that opposed UNIGOV under Gen Kutu Acheampong, working in the trenches with Nana Addo Dankwa Akufo-Addo, K. A Gbedemah and others.

It was when the leaders of the movement were being pursued that Joe left for Lagos where he stayed for 12 years.

On his return in 1990, Joe hosted programmes such as Sports Digest and Hall of Fame on GTV while teaching various groups in public speaking.

Today, at 90, Joe still teaches presentation at Accra Film School. Joe doesn’t appeared to be tired yet and moves about on his own attending family meetings.

He has plans to go round schools and colleges to talk to students because “most of them know next to nothing.”

On a final note, Joe’s advice to the youth is to aim at doing the right thing at all time.