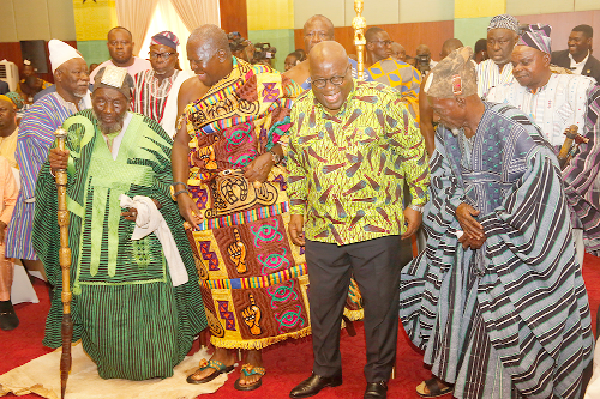 The role played by the Asantehene-led Mediation Committee that handled the Dagbon chieftaincy dispute, cannot be over-emphasised.

After decades of a biting dispute, the committee finalised its road-map to the restoration of peace in Dagbon on November 16, 2018. 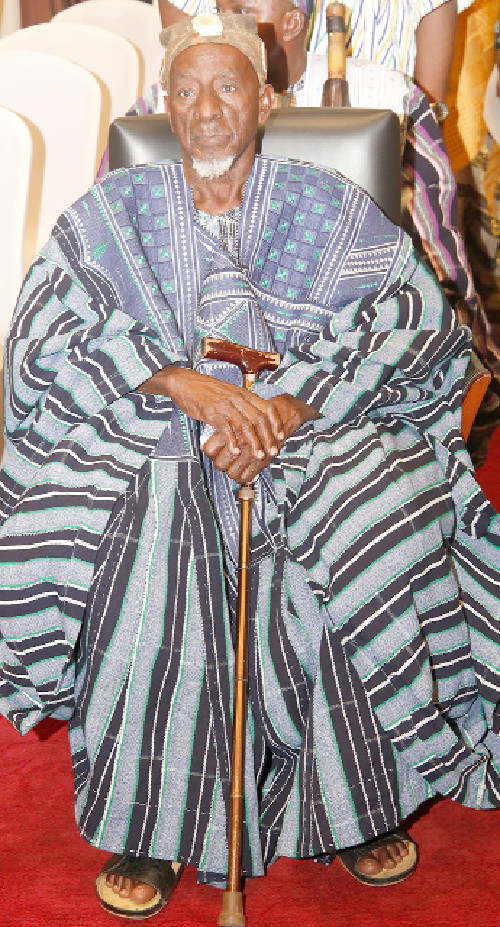 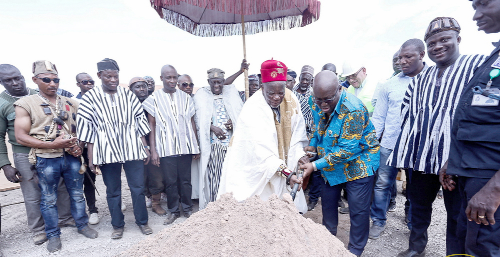 The committee’s efforts were crowned with the enskinment of a new Ya Na.

Equally, His Majesty has consistently questioned why politicians must continue to stoke up tension each election year.

That was why before the 2012 general elections, he convened a meeting of all the presidential candidates to commit themselves to peace before, during and after the elections.

Cultural display at the outdooring of the Ya Na

In April 1999, Otumfuo Osei Tutu II was enstooled Asantehene, making him the 16th Occupant of the Golden Stool.

At the time of his enstoolment the unity, peace, and development of Asanteman was under stress from a multiplicity of chieftaincy, land and family disputes.

Some of the most long-running of these disputes had defied resolution by the National House of Chiefs or the Supreme Court of the Republic of Ghana. 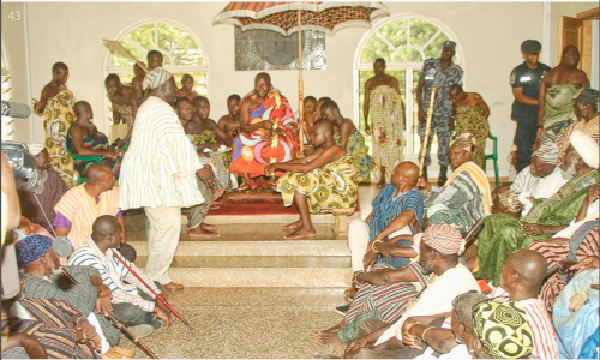 Displaying exceptional courage and statecraft, the new Asantehene was able to resolve all major outstanding litigations and disputes within his customary authority in a matter of a few years.

The speed and skill as well as the sense of fairness with which Otumfuo Osei Tutu II accomplished this feat soon earned him the accolade "King Solomon" from his people.

Since then, traditional leaders from jurisdictions outside Kumasi, national political leaders, business leaders, and a diverse range of citizens have sought His Majesty's intervention to mediate or facilitate the resolution of one or the other seemingly intractable dispute or conflict.

UN invitation
The Republic of Ghana itself has found it necessary or useful, especially when a dispute or conflict threatened a national crisis of sorts, to invite His Majesty to use his good offices to help preserve or restore the peace.

Otumfuo Osei Tutu II has invariably accepted this call to service as an honour and as a duty owed to his nation.

On Friday, May 10, 2019, the President of the Seventy-third Session of the United Nations General Assembly, Her Excellency Mar a Fernanda Espinoza Garces, paid a visit to Otumfuo Osei Tutu II at Manhyia Palace, Kumasi.

During the course of the meeting Her Excellency extended an invitation to His Majesty to participate in the United Nations General Assembly High-Level Forum to observe the 25th Anniversary of the Adoption of the Declaration and Programme of Action on a Culture of Peace.

In recognition of Otumfuo's contribution to the peace and stability that Ghana has enjoyed, Her Excellency invited His Majesty to speak on the “Dagbon Peace Accord” and the “Kumasi Declaration".

In recognition of the untiring efforts and enormous contribution of Otumfuo Osei Tutu II towards making Ghana one of the most peaceful countries in sub-Saharan Africa, as well as Otumfuo's transformative role in uplifting the image and dignity of the chieftaincy institution in Ghana, the E ON 3 Group, a top flight events management and business solutions provider, organisers of the Premier African Leadership Awards has conferred the maiden award of Pillar of Peace on His Majesty Otumfuo Osei Tutu II.

Kumasi declaration - Taking a stand against electoral violence, impunity and injustice in Ghana

It has been said that elections in Africa provide the greatest security threats to the nations on the continent.

In Ghana, anxiety, tension and fear of partisan violence often descend on the nation around Election Day and in the immediate aftermath of each general election, as the two biggest parties - New Patriotic Party (NPP) and the National Democratic Congress (NDC) - and their partisan supporters trade suspicions and accusations of rigging and vote buying and implicate the Electoral Commission.

The build-up to the 2012 Parliamentary and Presidential Elections was no exception.

The NPP and the NDC accused each other of planning to rig the elections and cause mayhem.

There was growing fear that neither party would concede defeat if the elections were declared in favour of the other party's presidential candidate. Both parties issued inflammatory words to that effect.

In response to this state of national anxiety and panic, Otumfuo Osei Tutu II, answering a request by the National Peace Council and civil society leaders, convened a meeting of presidential candidates ahead of the December 2012 Elections.

The contesting political parties were represented as follows:

1. His Excellency John Dramani Mahama, the incumbent President and Presidential Candidate of the NDC.

All the eight presidential candidates committed themselves to peaceful elections and signed on to a document known as “The Kumasi Declaration: Taking a Stand Against Electoral Violence, Impunity and Injustice in Ghana.”

The document , which was signed by all the Presidential Candidates spelt out what was expected from the candidates and their party members.

It stated as follows:

1. We, the Presidential Candidates of Ghana's December 2012 elections, having participated in the first high level meeting convened by the National Peace Council and the Manhyia Palace, Kumasi, in order to engage us on reducing recurring violence, impunity and injustice in democratic elections in the country.

2. Conscious of the fact that the high level meeting had taken place close to the presidential and parliamentary elections on December 7, 2012, and in a political and social context in which the public is justifiably concerned about a possible outbreak of some electoral violence during the elections.

3. Recognising that free, fair and violence free elections depend on political parties providing firm political leadership to the impartial enforcement of the existing electoral laws by state institutions and strengthening the organisational capacities of their political parties to promote their members’ compliance with the codes of conduct that they had endorsed, including the deepening of civic education.

4. Responding to the growing public demand for elections related offences and crimes to be effectively punished through professional investigations leading to fair, timely trials and justice, committed to the importance of manifest nationhood motivating this historic high level meeting, we the candidates for the 2012 presidential elections, conscious of our membership of the community of national leaders and our collective responsibility to uphold the unity, prosperity, security and stability of Ghana as a thriving democratic and peace loving nation declare as follows:

1. That it is time to take a definitive stand against electoral violence, impunity and injustice in our beloved nation Ghana because these acts are detrimental to the peace, welfare and sustained development of the people of Ghana.

2. That electoral violence, impunity and injustice are not challenges whose persistence cannot be effectively stopped through our collective leadership efforts.

Therefore, we are committed to leading a national process of reducing their recurrence in the short term, aiming to systematically eradicate them in the medium to long-term.

3.That ahead of the forthcoming elections on December 7, 2012, we shall forcefully and publicly speak out against all acts of electoral violence, impunity and injustice, whether perpetrated by the members of our political parties or our political rivals, and will seek to collaborate with the Police Service and allied law enforcement agencies to professionally discharge their duties without fear or favour.

4. That we shall conduct our political campaigns in such a manner that the ability of the Police or other security agencies to perform their roles and duties in enforcing the law and maintaining law and order will not be hindered whatsoever whether at the polling station, constituency, community, district, regional or national levels.

5. That we shall intensify and expand the scope of our civic and elections education activities such that the awareness and understanding of our members of the relevant electoral laws and the normative codes of conduct will improve.

6. That we pledge to hold ourselves mutually accountable as peers, especially, in promoting effective political leadership of the campaign against electoral violence, impunity and injustice.

7. That we commend highly the National Peace Council and the Manhyia Palace for taking this bold initiative to convene this historic high level meeting and similarly commend all the institutions and actors whose hard work and participation demonstrated a strong national desire for the successful consolidation of democratic electoral politics as a norm in sustaining Ghana as a beacon of hope, prosperity and social cohesion.

The ensuing elections came off without the widely feared partisan disruption or violence.

Incumbent President Mahama, who was contesting to win his first full term as president, was declared winner while the NDC retained control of Parliament.

Although the NPP disputed the results of the presidential ballot as declared by the EC, alleging widespread election malpractice and irregularities, its presidential candidate Nana Addo Dankwa, decided to take their case to the Supreme Court and urged the party's supporters to shun street protests.

After eight months of sittings, the Supreme Court dismissed the NPP election petition. Nana Akufo- Addo accepted the outcome, leaving President Mahama to continue with the business of government.