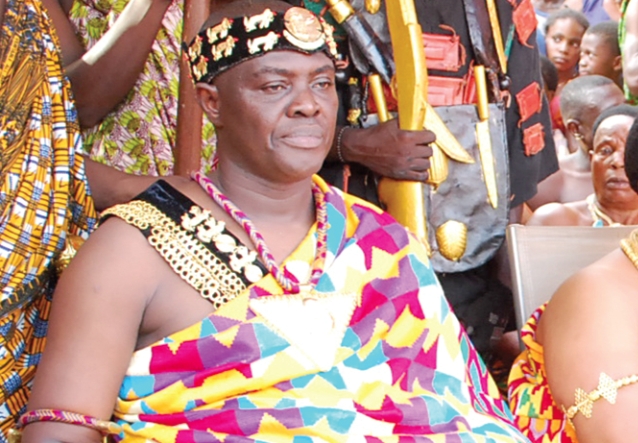 Dormaa-Ahenkro does not have a lengthy history with elite football, neither does the traditional area’s team, Aduana Stars, formerly called Dormaa United, having been in existence since 1985. However, their great ruler, Osagyefo Oseadeeyo Agyeman Badu has ensured that Aduana Stars have carved a niche for themselves and after 18 years at that job, he can beat his chest with pride that he has been successful.

Until Osadeeyo ascended the Dormaa stool in 1999, Dormaa United were only good enough to play in the lower divisions of Ghana football, but realising the potential of football as a powerful tool not only to rally people around and get them united, but also provide employment, Nana, known in private life as Daniel Mensah, a lawyer and now a Justice of the High Court, set himself the task of making the team great at least among its peers.

Before ascending the Dormaa Stool, he worked in the Oman Chambers in Sunyani established by Lawyer Kofi Gyamera (now deceased), one of the renowned private legal practitioners in the Brong Ahafo Region in those days.

For most of the people in Dormaa-Ahenkro Osadeeyo has already established himself as a quintessential club owner, with the overriding aspect of his job at Aduana Stars Football Club is to provide the needed financial support, and of course, give directions when and where necessary from behind.

A role he has played admirably and rewarded with the Ghana Premier League title in 2010, just a year after the club joined the elite league. While, they are yet to win their second, they have been consistent in the top 10 clubs since and this year, are in strong contention for the title.

But, why should a traditional ruler pump so much money into a football club in these times of economic hardships without thinking of monetary returns?

Well, Osagyefo Oseadeeyo Agyeman Badu says if profit was to be the main reason behind the formation of the club, he would have backed out of the sport long ago because running a club is not a lucrative business.

An ardent football fan, Osadeeyo continues to do what he has been doing for the past 18 years because it is an expression of his passion and he wants his love for the game to impact on Aduana Stars and to a larger extent, Ghana football.

He believes football can turn the economy of his traditional area around and provide fertile grounds for the youth to realise their potentials.

Nana’s desire to build a football powerhouse in Ghana came up after his enstoolment and he has so far proved equal to the task.

Having taken over the club, Aduana has moved from a boring side to one of the best teams in the country today.

Before the emergence of Aduana, the Brong Ahafo Region was synonymous with Bofoakwa Tano and B.A. United. These were the two teams that produced the best of players and commanded the biggest support base in the region.

Their supporters were all over the region, and it was common to see hordes of their followers travelling from other places in the region, including Dormaa Ahenkro, to watch their matches in Sunyani.

However, the coming on board of Aduana Stars and of course, other clubs like Berekum Chelsea and Bechem United, has hugely cut the support base of the two former giants, who are struggling in the Division One League (DOL).

I got to know Osagyefo Oseadeeyo Agyemang Badu when I was a correspondent of the Daily Graphic in Sunyani way back in the 1990s, but never knew he so much loved football until he took over Aduana Stars.

On my transfer to Kumasi, I recall travelling to Dormaa-Ahenkro to interview him on the transfer feud that emerged between sworn rivals, Accra Hearts of Oak and Kumasi Asante Kotoko over then Aduana Stars kingpin, Kofi Abanga who was eventually sold to the Accra giants.

During the interview , the Omanhene took me back to how his association with football started, and he drove me on the path he wanted to take the game to via Aduana Stars.

Since he took Aduana Stars from obscurity to the forefront of elite soccer in the country, the Dormaahene has known no return.

Just a year after gaining entry to the Premier League, Aduana made history by winning the league. That was the most successful period of Aduana Stars and they went ahead to participate in the 2011 CAF Champions League but got eliminated at the preliminary stage.

The team has also made an appearance at the 2011 WAFU Club Championship but failed to win the trophy.

Continuity breeds success and this has manifested in the progress of Aduana Stars. It is one club whose players hardly leave to join other clubs in the country because they are well catered for. Never would you hear of non-payment of salaries or bonuses at Aduana.

Combining the demands of his traditional and court duties with football can be demanding so he has handed over the running of the club to a management , although he remained the major financier.

Running a football club in Ghana these days is not a child's play; it is an expensive venture.

With sponsorships difficult to come by coupled with low attendance at matches and very low sales from club memorabilia, Ghanaian clubs have been financially overstretched.
Monies spent on salaries of players , technical staff and management staff are difficult to recoup.

Elsewhere, television rights alone provide a major chunk of revenues accruing to clubs. According to the BBC, a whopping £5.14 billion in television rights was accrued to the English Premier League in 2015 , a jump of 71 per cent over the 2014 revenues.

In the 2015, the Nigeria football league secured a five-year television deal worth $43 million with Supersport .

But the reverse is the situation in Ghana. In 2016, the Ghana Football Association (GFA) could only sign a 10-year deal with Chinese broudcaster, StarTimes, valued at $17,950,000. This, obviously is nothing to write home about.

Notwithstanding the low incomes accruing to Ghanaian clubs, the Dormaahene has leveraged the huge image of the stool he occupies to drive the Aduana club successfully without thinking of the monetary returns.

Aduana Stars derive their name from the Aduana Clan, one of the Akan clans or families, which believed their ancestors descended from the skies via a golden chain. The clan has the dog as its symbol

The Nana Agyeman Badu Park, which accommodates about 5,000, is the home grounds of the Brong Ahafo giants and they are always a dreadful sight at home.