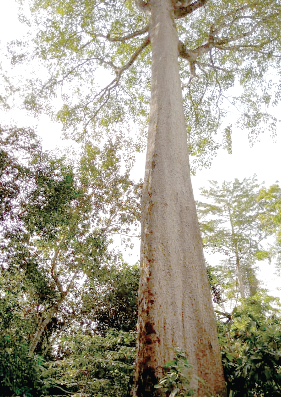 Preservation of vegetation is the most essential kindness humanity can bequeath nature and to one another.

The increasing plunder of forest reserves since colonial days till present has, however, robbed our forests of several special species of trees over the years.

Whereas many tree products are exported for commercial purposes, the discovery of some precious minerals in the forests has also necessitated mining activities; resulting in the depletion of our abundant and beautiful vegetation.

Illegal mining also known as “galamsey” in some of these enclaves has also been extended to farmlands and water bodies over the years, making life unbearable for persons living in such places.

Albeit, one of Ghana’s forest reserves has successfully maintained its virginity within the same period while others have been destroyed.

The benefits of such proper preservation can be realised after over 200 years, which is how long the Bunso Eco Park, made up of 610 plant species and one of the leading faces of forest reserves in Ghana, has been preserved.

The park hosts the iconic and oldest “Piptadiniastrum Africanum” in the world, popularly known as the “African Oak Tree”. The tree is 203 years old and has a diameter of 3.5 metres and is 92 metres tall.

In Ghana in particular, many might have heard of the tree due to its connection to the Accra Hearts of Oak Football Club, one of the biggest football clubs in Africa; but many have also not set their eyes on the African Oak Tree.

The Bunso Eco Park arboretum has become the hope of many of such unique plants such as the African Oak Tree because it is the oldest of its kind in Africa, for tourists and plant researchers.

The Manager of the Bunso Eco Park, Mr Kenneth Frimpong Asare, said in an interview with the Daily Graphic during a visit that a research conducted by the Centre for Scientific and Industrial Research discovered the African Oak Tree as well as its age in 2012.

“The tree was discovered and named during a research conducted by the Centre for Scientific and Industrial Research in 2012 at the park. The age of the tree was also determined in that same period as 194 years and the oldest as then none of its kind had been found in Africa. Annually we add a year; thus, making it 203 years this year,” he explained.

Mr Asare said the Ghana Tourism Authority (GTA) had taken much interest in the safety and preservation of the place to boost the tourism industry.

“We are here to make this park a very attractive one for tourists. The safety and preservation of the park is also at the heart of the GTA as well as the staff working here because we know what it means to the tourism industry,” he said.

He added that the park, which is also made up of other recreational facilities, was expanding its facilities to attract more tourists to become the leading tourist site in the Eastern Region and Ghana at large.