Now, that’s what I mean by leadership 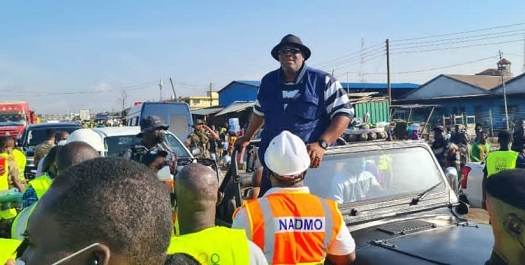 AT Agbogbloshie in Accra, Ghana is witnessing a brand of law enforcement known in military parlance as “buga buga”.

Unleashed by the Greater Accra Regional Minister, Mr Henry Quartey, this brand is the application of military-style brute force by civilian leaders to bring lawlessness under subjection to reason.

In the 1980s, a variant of this brand was in force around Kwame Nkrumah Circle by a certain Warrant Officer Salifu Amankwaa.

Applying a mix of brute force, instant fines and impoundment of vehicles, its success was greeted with a sigh.

In its early days, the exercise sanitised movement within the Circle area and brought a semblance of security into the metropolis.

However, as the praise of the people went into their heads, the guards and their military leader went the way of all “humans”: having tasted absolute and unchecked state power, they themselves later became criminals, lawless in the application of instant justice. Their power corrupted absolutely.

With the return of dangerous levels of lawlessness and near total ungovernableness since 1992, many are those who have, in the last few years under democratic rule, wished for a return of a bit of the Salifu Amankwaa style in Accra, Kumasi and Takoradi.

The advocates point to Singapore under Lee Kwan Yew, Rwanda under Kegame and Tanzania under Magafuli (RIP) and argue that a bit of brutishness brings results.

The Agbogbloshie situation is a case of two elephants locked in a battle to death. Arrayed against state power is the power of lawlessness determined to maintain the status quo by virtue of a claim to poverty, what one Ghanaian Head of State once described as “populist nonsense”.

But Henry Quartey is waving a perfumed white handkerchief around putrefaction and stench. His predecessors have failed miserably to lead.

One regime after another, they looked on unconcerned while people, in the name of poverty, set up business and made homes in spaces reserved by the state for future national projects. Within two years, they are unremovable: to remove them, the State has to relocate them or pay compensation.

Meanwhile, the city not only stinks; the pungency is made deadly by the release of toxic substances from burning of all manner of dangerous substances.

They argue, and it is true, that they have not brought their plight upon themselves. After all, they say, the majority of them were born or grew up on the wrong side of fortune.

For 20 years, therefore, authorities of this country have gone into fights from which they have always emerged the vanquished, with their tail behind their legs.

Once upon a time, it was a legal battle to relocate Sodom and Gomorrah. The state lost (for me, painfully) and the poor stayed put.

Painfully because the longer they stay at Sodom and Gomorrah, the more impossible it gets for any government to revisit the dream of Prime Minister K. A. Busia to turn that interminable stretch of beautiful waterway into a recreational hub with water sport, surfing etc.

Government handling of these cases has been touch-and-go, dictated mostly by political expediency, like the story of street hawkers who have taken over the streets of Makola Square.

In 2005, President Kufuor’s will nearly prevailed. With public opinion on his side against the hawkers, Kufuor, after intensive and extensive behind-the-scenes consultations with pastors and imams, got the hawkers to quietly withdraw. Hurray. Law and order had won!

Then the Odododiodio parliamentary seat fell vacant. In a battle of its life, Kufuor, in dire need of votes for his party candidate, looked the other way as the traders returned with a vengeance and, in addition, voted against the NPP.

Henry Quartey knows this history as he embarks on his “Let’s Make Accra Work”. For the first time in the history of law enforcement, the traders and scrap dealers fired at a state representative.

But Henry Quartey, like the beast in the film, ‘The Thing That Couldn’t Die”, strutted unstoppably around Agbogbloshie and succeeded in chalking up a feat unequalled by anyone before him.

What are the lessons for the rest of our so-called leaders?

The Henry Quartey paradigm of leadership has been the classic case of exhaustive multi-layered communication audit.

It is the triumph of reason. The result of this is that wherever the traders and scrap dealers turned for support, namely chiefs, religious leaders and the media, the minister had been there.

What drives this man?

It is called leadership. But he knows that a leader is not only the one who gets his will done, but who respects the will of the opposition and consults it.

The writer is the Executive Director, Centre for Communication and Culture, E-mail: This email address is being protected from spambots. You need JavaScript enabled to view it..