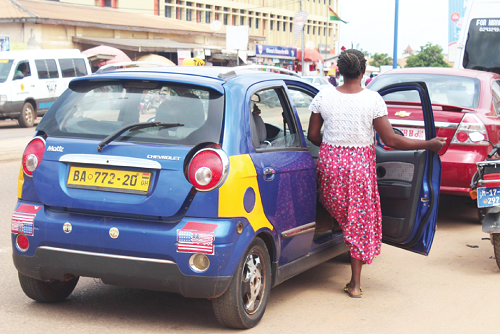 A passengers boarding a taxi in Sunyani

Trotro business, that is the use of buses and mini buses and all sorts of vehicles for intra-city transportation, is rife in Accra, Tema, Kumasi among other cities in the country.

The use of this mode of transport within these towns which is very popular is patronised by people who occupy the lower and the middle classes of the economic ladder.

It is thus not uncommon to see Ghanaians, including market women, public and civil servants and sometimes schoolchildren lined up at the various lorry stations and beside the shoulders of the streets, especially during the morning and evening rush hours patiently waiting for the arrival of trotro to take them to work and home respectively.

The patronage of the services of trotro is good because it is a cheaper means of transport within cities and from the cities to the outlying communities and vice versa.

In fact, the meaning of trotro speaks for itself as the word tro refers to the lowest denomination of the Ghanaian currency, one pesewa.

However, this is not the reality in Sunyani as there is currently virtually no trotro service within the municipality.

Trotros are not even available for commuters from Sunyani to the relatively far surrounding communities such as Abesim, Nkrankrom, Watchman, Fiapre, Catholic University College, New Dormaa, Odomase, Liberation Barracks, Kotokrom and Yawhima.

Even with the use of taxis, residents in the municipality prefer the posh ones and those with new registration numbers, while the dilapidated ones are used to carry foodstuff such as cassava and plantain, as well as fruits from the outlying communities to the main Sunyani Daily Market and the Bosoma Market on Wednesdays.

The only route where one could obtain the services of trotro is the about 15-kilometre journey from Sunyani to Chiraa in the Sunyani West Municipality and even here, they have to compete with the taxis.

Some of the taxi drivers told the Daily Graphic that even though the taxi fares kept changing from time to time because of the occasional adjustment in fuel prices and car parts among others, it would be a tall order for mini-bus operators who would want to venture into the trotro business within the Sunyani Municipality.

“No matter the situation, commuters in the Sunyani Municipality will continue to use taxis to commute within the town since it is also relatively cheap to access their services,” a taxi driver, Gordon Asante, explained.

His assertion is true since no matter where one stood within the town, one could reach the central business district by paying GH¢2.40 which used to be much lower until the recent increase in the price of petroleum products.

Despite motor tricycles, popularly called ‘pragya’ becoming the most common means for people in some towns and cities to commute from one point to the other, Sunyani has become a no-go town for operators of this thriving transport operation to carry on their trade.

At best, they are operating at the peripheries of the town, where they carry passengers from the roadsides to developing sites where there are no good roads.
The daring ones, however, make inroads into the Sunyani Main Market and few places, albeit at the blind side of the police.

Some of the taxi drivers this writer spoke to expressed the hope that everything possible would be done to prevent the pragya operators from plying their trade in the middle of the Sunyani Township to avoid the nuisance they were causing in other cities and towns across the country.

For now, taxi drivers are having a field day in Sunyani and it is only posterity that could tell whether residents would be pushed by frequent hikes in transport fares to patronise the services of trotro operators when they dare to challenge the current monopoly being enjoyed by taxi drivers.