Neglected! No development projects in 14 years in Bosome Freho District 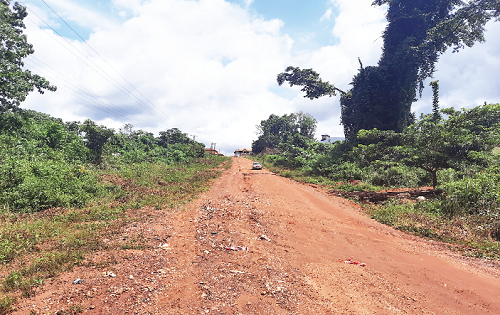 A woman in labour has to be transported on a motorbike (okada) to the nearest hospital as there is no health facility in the town.

Although the major vocation of indigenes is farming, they have to look on as their harvested produce rots on their farms because of their inability to transport them from the farm gate due to poor roads.

A journey that will ordinarily take 30 minutes now takes about two hours, while commuters prefer to travel on motorbikes.

The bad nature of roads at Asiwa, the capital of the Bosome Freho District in the Ashanti Region, due in part to the lack of investment in development projects since the district was created in 2007, is responsible for this situation.

A taxi driver, Mr Kwabena Mintah, lamented the poor condition of the roads and said: “Due to the bad nature of the road, even passengers no longer board the taxis. They prefer taking the motorbikes as they are much faster and can easily navigate their way through. A journey that should last 30 minutes takes about two hours as a result of the bad road network.”

Mr Mintah appealed to the government to turn its attention to the district to help reshape and tar the roads to help boost economic activities.

He said the poor nature of the road had affected their trade and those of farmers who were unable to cart their farm produce from the farms to the market.

Madam Vivian Annan, a farmer, said the situation was not only bad for farmers but also for pregnant women in labour who had to be transported on motorbikes to the hospital.

She said farmers spent more money to cart their farm produce to the market as the road was not accessible and they had to rely on the tricycles which were unable to cart enough cargo as the trucks.

She added that those unable to transport their produce to the market left them to rot on their farms.

The district is known for cabbage production and other food crops such as cassava, plantain, yam and maize.

It is mainly a rural district and farming is the main stay of the residents.

The Bosome Freho District Assembly was established by Legislative Instrument (LI) 1852 of 2007 and was carved out of the erstwhile Amansie East District.

However, 14 years after its creation, not much has changed in the district, according to the Chief of Asiwa, Nana Owusu Adjei Brempong III, who said the district could not be compared to other districts that were created around the time.

Nana Brempong III said since its establishment during President Kufuor’s administration, the district had not benefited from any development project that befitted their status as a district.

He said development in the district and particularly Asiwa, its capital, was nothing to write home about and called for massive infrastructural development commensurate with the needs of the district.

Interacting with the media at his palace, Nana Brempong III said unlike the other districts that were created around the same time, Bosome Freho had been neglected and had not seen any development compared to the others.

“We are the most deprived district in the region,” he said, adding that the district lacked development projects and income generating programmes to improve the livelihoods of the people.

He enumerated some of the challenges facing the district as the bad road network, the absence of a market for traders to ply their trade and the lack of a district hospital to cater for the health needs of the growing population, as well as public toilet facilities to curb the incidence of open defecation and its related health hazards.

He said all the road networks were in a deplorable state, thus affecting effective business activities and further preventing investors from investing in the area.

Nana Brempong III reiterated that as a result of the bad road network, farmers had difficulty transporting their farm produce to the markets.

He said people had started encroaching on a 33-acre parcel of the land that had been provided for the construction of the district’s hospital as a result of the delay in executing the project.

He pointed accusing fingers at the political heads of the district for being insensitive to the plight of the people and not pushing for development projects for the district.

Nana Brempong III further appealed for the government flagship programme, ‘One District, One Factory’ (1D1F) to be extended to the Bosome Freho District to create employment for the youth.

A Community Centre initiated by the community some time ago, according to the chief, had also stalled due to financial constraints and the poor economic activities in the area.