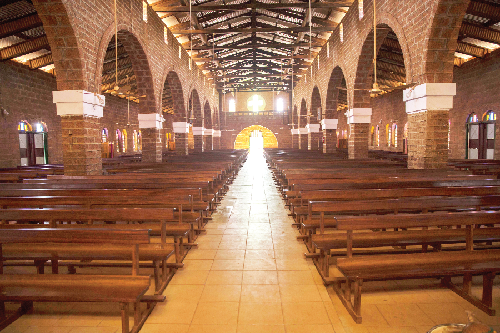 The main auditorium of the Basilica

The St Theresa’s Minor Basilica of the Catholic Church in Nandom in the Upper West Region is one of the oldest and iconic infrastructures that does not miss the visit of any Apostolic Nuncio, the representative of the Pope in the country.

Other important personalities of the Catholic Church, as well as the average tourist who wants to satisfy the curiosity of keeping pace with human-inspired wonders, will also not miss the opportunity to see the Basilica when they are in that part of the country.

Constructed by the Catholic Missionaries of Africa in 1936, three years after their arrival in the Upper West Region, the edifice stands tall among the wonders of architecture across the world, since its consecration in 1939.

It may not be your typical Notre Dame Cathedral, the Basilica de la Sagrada Familia in Barcelona Spain, which has been under construction since 1852, or the Basilica of St. Ursula in Cologne, Germany, but it certainly passes as a masterpiece from its rock-hewed blocks ‘soldered’ together with high-strength cement imported from Germany.

The Nandom minor basilica which is second to the only full basilica in West Africa, the Basilica of Our Lady of Peace of Yamoussoukro, Cote d’Ivoire, is shaped in the form of the cross from an aerial view; its twin-towered facade draws inspiration from St Peter's Cathedral Basilica, London, Ontario in Canada, although on the whole, a much shorter and smaller edifice.

The missionaries brought in a German Mason, Reverend Brothers, who trained the local people in brick-laying and the art of carving blocks from stones sourced from the rocky Nandom community, both of which he supervised for the completion of the impressive piece of work.

Even though it was built in the 1930s when the talk of green civil engineering was remote but sustainability was well in sight, the building passes as a ‘green building’ — buildings that use less electricity.

The builders made enough provision for the structure to take its ventilation and lighting from natural sources, as plenty open spaces and windows have been created to let in natural light and air.

The glass window panes tainted in many colours reflect the rays of the natural light into the auditorium to avoid the need for high electricity consuming multi-coloured flashing (disco) lights, as is the case in many modern church auditoriums.

The columns support beams of nicely cut wood that lie perfectly on top of the structure to hold the zinc roof which has survived many decades of harsh weather, until 2009 when the roofing was replaced.

Interestingly, the architectural orientation of the basilica has found expression in all structures that the missionaries put up in Nandom. This includes the mission house, the primary and vocational schools, as well as the hospital. They are all built from bricks carved from rocks.

The Assistant Parish Priest, Reverend Father Leonard Baakyiretuo, told the Daily Graphic that the location of the Basilica was a hill, which was flattened after the stones were quarried and shaped into various sizes of blocks for the building.

The workers were paid three pence, a tiny coin and the least denomination of the British Pound in the then Gold Coast. The allowance was later increased to six pence, but that, surprisingly, incurred a revolt from the workers who argued that the Basilica and the church belonged to them in the locality, and not the Father, for which reason they considered the job as a sacrifice and their contribution, Rev. Fr Baakyiretuo said.

The Minor Basilica, which seats between 3,000 and 4,000 worshipers, opens at 4:30 a.m. to prepare for the morning mass, and closes at 10 p.m. However, the assistant Parish Priest said the Adoration Chapel in the Basilica was opened 24 hours.

The basilica also organises catechism for about 300 children every year.

The Catholic missionaries also established their footprints in education in the district. The Minor Basilica came with a primary school to offer education to children. It was opened in 1939 and by 1940 the second educational institution, the St. Andrews SHS came in.

Rev. Fr Baakyiretuo said most of the bishops in the northern part of the country attended the St Paul’s Primary School.

The same building technology and architecture has found expression in many ways in the entire infrastructure housing the schools and hospital.

Rev. Fr Baakyiretuo said the Sisters with the mission who were nurses started a clinic at the mission house where the Basilica was located to attend to the health needs of the community. When it caught on, they moved it out of the premises to set up what was known today as the St Catholic Hospital in 1960.

A cathedral is the principal church of a diocese and the seat or throne of a bishop. The term is sourced from ‘cathedra’ in Latin, meaning "chair" and ‘Kathedra’ from Greek, meaning "seat".

A basilica is the name given to certain churches granted special privileges by the Pope. As a general rule, basilicas are the highest ranking churches and are declared so by the Pope. Some high profile basilicas are built on top of the burials of notable saints (St Peter's, St Francesco of Assisi, St Vasily in Moscow, St Paul Outside the Walls and so on.

It should be noted, however, that if the bishop is the head of his diocese, then his cathedral outranks any basilica in his diocese.

The size, an art of wonder and the privileges accorded a basilica determine whether it is minor or major.