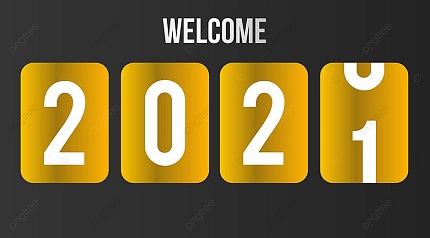 I gleefully write to you proposing a relationship that might result in a lasting friendship, or even marriage, if all goes well.

2021, as an odd number, as mathematicians call you, you don't look so beautiful or appealing: Two, zero, two one---2021. But I hope that something good and beautiful might come out of you just like little Bethlehem which produced The Christ whose birthday we are celebrating now. As such, I'm undaunted by your seemingly unattractive appearance. After all, appearances could be very deceptive. Shakespeare puts it more succinctly:

"There's no art to find the mind's construction in the face."

Oh yes, appearances could be misleading. Your immediate predecessor was so beautiful at first sight but "behind that beauty lie the true colours that would destroy me in the near future," as Lucky Dube puts it. 2020---Two, zero, two, zero or twenty twenty. Either way, she looked so beautiful. So I was misled to think her character would be commensurate with her beauty. And so on the midnight of December 31 of 2019, I received 2020 with open arms as a bachelor hugs or embraces his new wife. I caressed, fondled, kissed and led her into my abode.

Afterwards, I gave her the choicest and the most delectable dishes my income could afford. She drank the coolest and the juiciest drink in my house. She slept, woke up, ate, slept again. That was her perfect cycle. On the fifth day of her arrival it dawned on me that 2020 wasn't as beautiful as she had initially presented herself to me and my family members. On that day, I received the disquieting news of the death of Inspector Kate Hawa Abban, a prosecutor at the Circuit court, Techiman. Kate's was a sorry story. Her ailing and aged mum had been living with her at Techiman, the capital of the Bono East region. Kate's mum was dear to her. A few minutes of being in Kate's presence, you were likely to hear about her mum as the old lady featured prominently in her daughter's conversations. Kate would "seek leave of court", rush home to give her mum lunch before returning to court. She called me "our husband" and I addressed her as "our wife".

Kate, her mum and Kate's three children spent the 2019 Christmas at Ablekuma Fanmilk, Accra. While Kate was cooking on a Sunday afternoon after church service, the gas cylinder exploded (or leaked?), caught fire and caused the deaths of Kate and all her three children who rushed to their mum's rescue when the fire engulfed her. On hearing the story, I wept like a child though Ngugi Wa Th'iongo, the Kenyan writer, says "Weep Not, Child."

"Time heals", our elders say. So I recovered from the shock of Kate and her children's tragedy in a month's time. I celebrated my birthday on February 5, which turned out to be a very eventful day: Donald Trump secured acquittal in impeachment proceedings, Kenyans mourned their second and longest-serving president, Daniel arap Moi, who died aged 95, former British Prime Minister David Cameron's bodyguard was arrested for leaving a loaded gun and Cameron's passport on the toilet of a plane, the First Lady of Lesotho was arrested on a charge of murdering her former rival, her husband's former wife, a fake lawyer was arrested at the Techiman Circuit Court etc.

Exactly a week later, my wife left for Italy on an official assignment. Days later, the Covid-19 scare spread through Italy with virulent haste. Italy, by then, had the unenviable record of recording the highest number of cases in Europe. So our two little boys and I were caught in a maelstrom of emotions as we listened to the BBC on the car radio to and from school every day. She later returned via France whose Covid-19 cases were also rising steadily. On arrival on March 10, she went into self-quarantine/isolation on the advice of two doctor friends. For 12 days, we didn't, wouldn't and couldn't get in touch with her. A fortnight later, Accra and Kumasi were put under lockdown. Covid-19 took a heavy toll on us as a nation. Businesses closed down, businesses slowed down, businesses collapsed, human relations got strained, funerals and other large gatherings were banned, schools closed down, teaching lessons were offered online by some schools, parents had to bear the costs, frictions increased as couples were literally locked up under one roof with limited space for privacy and other forms of masculine maneuvering. Several people, big and small, died. Dirges were sung in more mournful and doleful tones as the bereaved wondered why death should visit at the outbreak of such a strange disease; a disease whose presence had brought about so much dreadful disorder. A disease which forbade a man from shaking hands with his fellow man even in times of trouble as a form of consolation, had, indeed taken away our common humanity, a disease which required a man to stay for just a few minutes in the house of the deceased was definitely more dreaded than death itself, a disease which limited the number of men to attend a man's funeral was unheard of.

Since every death within that time was suspected to be Covid-19 related, some sick persons, instead of going to the hospital, kept to themselves. They became a source of mystery, speculation and suspicion. I was one such person when I fell sick from 2nd August till the end of August. No outing, no work. I treated malaria twice but to no avail. I resorted to traditional medicines of all sorts. I was so weak that I literally got myself a wet nurse. I refused to visit my family in Accra, much to their consternation. I lost my sense of smell; and I'm yet to regain it fully.

I also encountered occupational hazards. The outstanding one was when I had worked for a client for weeks and had taken only a thousand cedis from him on the assurance that he would give me the remainder later. Midway, the case was settled out of court and my client demanded the thousand cedis he had earlier paid. I refused. He called me on phone one morning, started mentioning the names of some allegedly powerful gods and invoked curses on me. Hmmmmmmm. The woes of a private practitioner.

Lovely 2021, I recount these experiences to forewarn you lest you repeat the mistakes and misfortunes of your predecessor, 2020.

After suffering a string of misfortunes in 1992, Queen Elizabeth II finally spoke at Guildhall on 24th November 1992 marking her Ruby Jubilee on the throne. She described 1992 as "an annus horribilis"

Later, our own Kofi Annan, speaking on 21st December, 2004, said:
"There's no doubt that this has been a particularly difficult year, and I am relieved that this annus horribilis is coming to an end."

Refreshingly, 2020 and I have mutually agreed that we are incompatible. Our marriage has "broken down beyond reconciliation," as lawyers put it. So you, 2021, are packing in as soon as 2020 packs out. I know I can survive you and beyond because God is my pillar and he assures me that "Because he lives, I can face tomorrow."

I compare 2020 to a certain tough year in the farming community of Umuofia as recounted in Achebe's "Things Fall Apart." In that year, the harvest was bad and "sad like a funeral and many farmers wept as they dug up the miserable and rotting yams." Okonkwo, the bravest man in the area, remembered that tragic year with a cold shiver through the rest of his life. It surprised him that he did not sink under the load of despair. He knew he was a fighter, but that year had been enough to break the heart of a lion. But he stayed strong and hopeful! "Since I survived that year," he always said, "I shall survive anything." Wow! I take inspiration from that. Since I survived 2020, I shall survive anything. That is my unwavering assurance, my belief, my confidence, my conviction, my faith, my hope, my song, my stance, my prop, my zeal.

Dum Spiro Spero, "while I breathe, I hope."

Your most promising paramour,