Memoirs from the Hilltop launched! 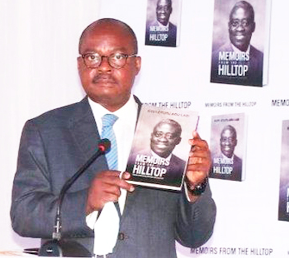 Emceed by ace broadcaster “Chairman-General” Kwami Sefa Kayi, the two-hour function started at exactly 5pm with the chairman being invited to start proceedings after an opening prayer.

In his comprehensive review of the book spiced with copious doses of humour, Nana described the author as a prolific writer who has written nine books since 2016.

Contrary to what conventional wisdom would have suggested that, coming out around his 70th birthday (March 2021,) Memoirs from the Hilltop would be the icing on the cake for the author’s illustrious career, he quickly said he had no intention of retiring his pen.

He stated he would continue writing for as long as God allowed him.

A fascinating revelation Nana made about the author was that, for three consecutive years in the 1970s, he won the National Quiz Competition, “What do you know?” including annexing the title of Champion-of-Champions in 1975.

Talking about the author’s 32-years’ service at the Dansoman Emmanuel Presbyterian Church and currently with Adenta-Frafraha Victory Presbyterian Church, and his featuring many hymns in the book, the reviewer lamented the fact that, much as he would have loved to, he could not sing a hymn to the audience.

This was because, when he tried singing in secondary school, he was banished from further singing classes by the Music teacher!

Commiserating with the reviewer, Her Ladyship Chairman stated that, should that misfortune befall anyone in the audience, we must remember that, just as the nightingale sings, the frog also does. Both are God’s creations! We should therefore all make a joyful noise unto the Lord.

This was music to the ears of “Chairman-General”, who is incessantly teased by his colleague at Peace-FM, Dan Kwaku Yeboah, for singing cacophonically into good music.

The climax of the evening was the launch of Memoirs from the Hilltop by the Governor of the Central Bank of Ghana, Dr Ernest Addison.

I will not attempt a kamikaze mission of summarising a 383-pages, 37-chapters autobiography in a 750/800 words limit article. The sub-title of Memoirs from the Hilltop is Stories and Lessons from the school of life.

Thus, the author describes in the minutest of details names/persons, places and events throughout his life which only a photographic memory can recall. For example, he recalls names of his classmates at the PTC Demonstration School, Akropong with amazing ease (page 29.) He does the same for his Law Faculty mates at Legon.

I found significant the quote below (page 9) on Ghana’s independence.

“Fortunately, the struggle for independence in the then Gold Coast, which became Ghana at independence, was devoid of the armed conflicts and the guerilla warfare that characterised the struggle in other places, including Algeria, Kenya and Zimbabwe.”

This is history the younger generation should know.

Nana Gyan said this about the author.

“It has been almost a perfect life, if ever there was one, and I can tell you that, this book is equally an almost perfect autobiography.”

For such an accomplished and successful gentleman, self-adulation would have been logical. Yet, the author has always been humble. He gives all the glory to God. The lesson for us is to realise that humility is a virtue, and that any God-given talent must be used to serve humanity.

The reviewer also stated: “The aspect of this book which will most inspire readers is character, which is the spine of moral consciousness.”
As Billy Graham put it “When money is lost, nothing is lost. When Health is lost, something is lost. But when character is lost, all is lost.”

In Ghana where authors are few and far between, the launch of Kofi Otutu Adu Labi’s 10th book should inspire Ghanaians to write. It was gratifying to hear that some of his books are textbooks in institutions.

Once again, as I did during the launch of my book “Retirement Musings” in 2019, I am appealing to Ghanaians to write!

In his contribution, the publisher of the book, Mr Fred Labi of Digibooks, expressed his readiness to assist those with manuscripts ready to publish.

Finally, I would be remiss in not commending Nana Kwasi Gyan Apenteng for his excellent review of Memoirs from the Hilltop, “Chairman-General” Kwami Sefa-Kayi for steering affairs so well, and the Choir of Adenta-Frafraha Victory Presbyterian Church for the melodious music. To the author, congratulations!
Leadership, lead! Fellow Ghanaians, wake up!