Apart from being a recreational facility, this pitch has been designed to hold rainwater and prevent floods
30.5k Shares

Lying in the heart of Copenhagen is the Enghave Climate Park. It covers a total area of 35,000 square meters (m2). A concrete retaining wall has been built across the entrance to the park that returns back along both sides. The retaining wall has a channel along the top as a water feature. And, on the left side of the entrance, there is a large basin on top of the wall that will fill with water. 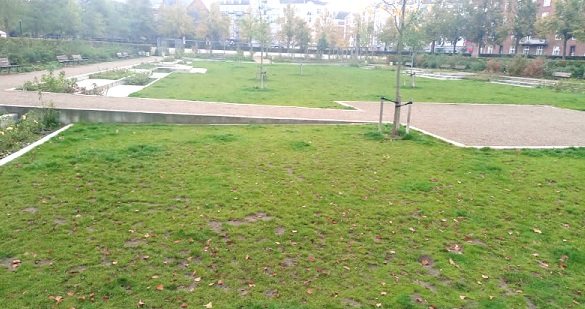 The north-eastern side rests a garden with shrubs and trees. The area has been lowered with pathways sloping down to allow rain water flow naturally into a holding tank under the lawn.

The imposing greenery and serenity at the park will sweep any first time visitors to the area off their feet, but behind the aesthetic value is the real story.

The park, which originally served as an important urban space for people of Copenhagen for more than 90 years, has been transformed into the city’s largest climate adaptation and mitigation hub, meant to control flooding.

On July 2, 2011, a downpour in the Greater Copenhagen area of Denmark led to flooding that was said to be the greatest in about 55 years. The enormity of the flood was such that it caused the city an estimated DKK 6 billion in damages. 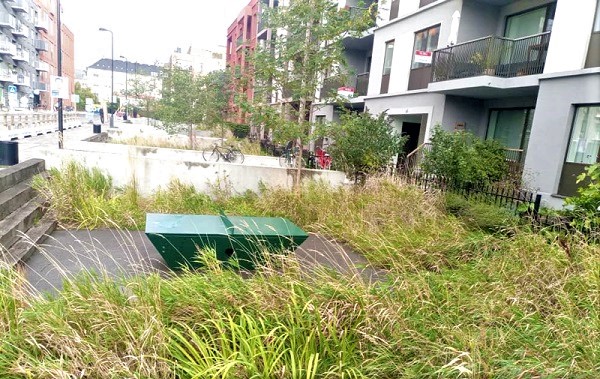 Afterwards, an economic assessment of the costs of damage to Copenhagen if nothing was done to adapt the run-off and sewage system was estimated at DKK 16 billion over 100 years.

The Director of the Technical and Environmental Administration City Structures Climate Adaptation project in the city of Copenhagen, Jan Rasmussen, explained that it was the sad event of July 2, 2011 that gave impetus to the idea of transforming the Enghave Park into a climate mitigation facility.

He noted that subsequently, the municipal government opened a new department of area renewal, with the focus to provide adaptation features that will curb flooding in Copenhagen. 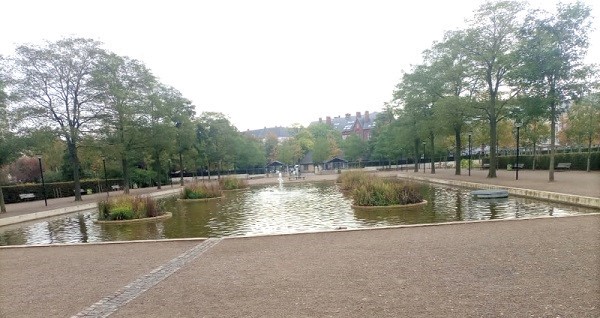 The city of Copenhagen developed a flood management plan in 2012, which is an offshoot of the Copenhagen Climate Adaptation Plan. The plan outlines the priorities and measures recommended for climate adaptation, including extreme rainfall.

One of the key projects under the plan is the transformation of the Enghave Park into an area for climate mitigation. Extensive engineering works within the park started in 2014 and was completed in 2019, turning it into one of the largest climate change mitigation projects in the city. He indicated that with a collective resolve, backed by strong leadership and citizen buy-in, low-lying areas were mapped out to be fixed with adaptation features for flood control.

Apart from the climate park, there is a government policy that requires all developers to put in place systems to retain some of the rain water on their land to reduce flood problems. One of the ways of doing so is to get green roofs.

A senior Consultant and Project Manager of NIRAS, Dr Henrik Borgtoft, explained that the green roofs were made with bricks and some plastic that could hold water.

“Plants that are resistant to drought are planted there, and they absorb the water when it rains.When the rains are heavy, some of the water falls to the ground and percolates because the surfaces are also green,” he said.

Dr Henrik observed that in the wake of increasing threats of climate change, it was important for countries to put in place adaptation and mitigation systems to increase the ability of the land to hold water.

“We need to have green areas and retention basins in our cities; this is crucial for curbing flooding and its impacts,” he said.

For many decades now, the residents of Accra have counted their losses to perennial floods.

Similar to the Copenhagen floods of 2011, the city of Accra was hit by the greatest flood disaster ever in the country’s history on June 3, 2015. At least, 159 people lost their lives in a flood and fire disaster that occurred in the capital city after a cloudburst.

Many experts have attributed the flooding situation to a compendium of lapses including leadership failure, weak enforcement of the building regulations leading to haphazard housing development, poor waste management regime and weak drainage infrastructure.

They observed that with rapid urbanisation and the haphazard housing development in the country, some people tend to develop in areas that obstruct the drainage channels, either the natural ones or those engineered through concrete linings, and that blocks the water course and brings about floods.

As sprawling slums emerge in the capital city, residents of these squatter communities put up kiosks and other structures in waterways, thereby obstructing the natural flow of rainwater and resulting in floods.

Then, there is the big elephant in the room – dumping of refuse into the open drains which affects the flow of run-off water and causes flood.

The Director-General of the National Development Planning Commission (NDPC), Dr Kojo Esseim Mensah-Abrampa, said the causes of floods in Accra were both natural and human-created.

“Naturally, the northern sections are all surrounded by mountains or highlands - the Krobo hills, the Akuapim hills and the Ga South hills. These hills are made of sand stone so when it rains, the sand stones move with silt. Normally, we should find a way to break this water that comes from the hills; but, we have triggered the process by human activities.”

Dr Mensah-Abrampa observed that because people have built in waterways, the water which flowed from the mountains which should naturally get into the sea, is blocked, causing floods in the process.

He said the flooding situation in Accra had become pervasive because natural collection ponds that were located at strategic parts of the Accra to retain water had been wiped off by human settlements.

“These natural collection ponds were located at Atomic, Sakumono, Lake Estate and Dansoman. We have now built in these natural ponds. The only one left now is the Atomic area, and even with that one, people have started encroaching on it with impunity,” he said.

The President of the Ghana Institution of Planners (GIP), Mohammed Alhassan, said the perennial flooding in Accra was because of leadership failure, rapid urbanisation, haphazard housing development and poor engineering works.

“The problems have long been known; the expertise to deal with the problem is available; but what we lack is the will of leadership to tackle the problem head on. The basic unit of development in Ghana is district assemblies and all the triggers of flooding are happening in these units,” he said.

Apart from these factors, Mr Alhassan said there was also the big issue of ineffective engineering services where drains were not designed with the appropriate capacity to handle the volumes and speed of run-off water or not aligned or engineered in ways that allows for natural flow.

“If you have a drain terminating at a 90-degrees angle, you will certainly have floods there. Then, there is the problem of people increasingly paving the land surface in the cause of development, leading to almost zero percolation because water is unable to seep at all in some people's homes,” he observed.

Mr Alhassan said the solution to the floods in Accra was multi-layered and centred on concerted efforts to reduce the amount of water that was thrown into the drains and then increasing the capacity of the drains to carry whatever water falls in by ensuring that there was no silt or garbage.

He said one sure way of tackling the menace was to provide incentives for people to collect rainwater at home in various ways to reduce the amount of run-off water.

“We should enforce the law that says that you cannot cover more than 50 per cent of your buildable land so that we can have the situation where people's homes can accommodate or seep some of the water,” he said.

The GIP President also called on the mandated state agencies to enforce the law that requires people to secure building permit before they build, as that would do away with housing development in waterways.

Section 97 of the Local Governance Act, 2016 (Act 936) empowers the local assemblies to remove without prior notice, unauthorised buildings in the public right of way such as waterways, roadways and transmission facility ways.

Again, he called for prioritised investment in the drainage infrastructure to increase their capacity to handle higher flood circles.

“If we are able to design our infrastructure to contain 50-year flood circles, anything having to do with lower flood circles cannot affect us.

“If we do this, we are done. There will be no flooding in Accra,” he said.