Losing out to IUU fishing; the cost Ghana bears 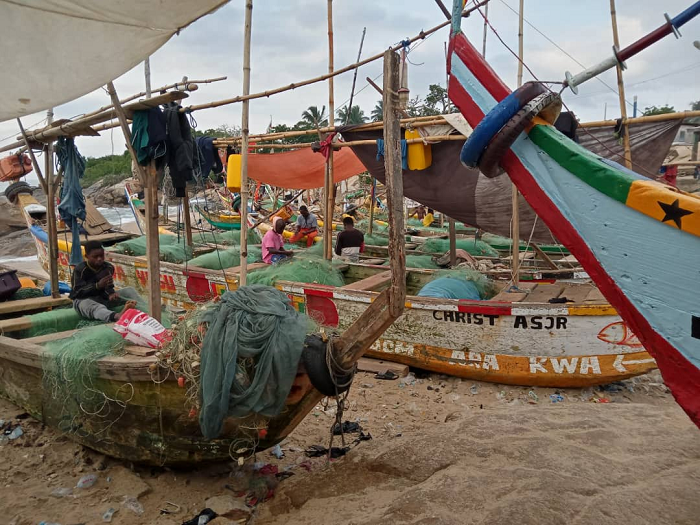 The fisheries sector remains a key contributor to the growth of Ghana’s economy. The sector serves as a source of critical food security, poverty alleviation, health, and wealth. It provides job opportunities for many coastal communities.

Even though the fisheries sector offers a great opportunity to better the lives of many Ghanaians, illegal, unregulated and unreported (IUU) fishing practices unduly affect communities, their economies, food security, and contribute significantly to extreme poverty among fishing communities.

Ghana is faced with so many forms of IUU fishing practices, including the use of illegal fishing gears, overexploitation, overcapacity, light fishing, fishing with explosives such as dynamite, and illegal transshipment at sea, popularly called “Saiko.” In 2017, approximately 100,000 tonnes of fish were landed through saiko, the Environmental Justice Foundation estimates, meaning just 40% of trawler catches were landed legally that year.

In November 2013, Ghana received a warning (yellow card) from the European Commission, for failing to comply with fisheries management and monitoring obligations under international laws. This was lifted in 2015 as a result of new legislation and a clear fisheries management plan. However, while these policies are well constructed, they have not been implemented or enforced, allowing the situation to deteriorate and leading the European Commission to issue a second yellow card warning. Ghana is the second country ever to have been re-carded in this way and must now urgently work to eradicate illegal fishing by vessels flying its flag and operating in its waters.

Under the EU IUU regulation, non-EU countries identified as having inadequate measures in place to prevent and deter IUU practices may be cautioned with a formal warning (yellow card) to improve. If they fail to do so, they face having their fish banned from the EU market as an escalated sanction (red card).

Professor Wisdom Akpalu, a Natural Resource Economist and the Director of the Environment and Natural Resource Research Initiative (ENRRI – EfD Ghana), thinks that Ghana has not done much to stop IUU fishing.

For him, almost all fishers in Ghana, including artisanal, semi and industrial trawl vessels engage in IUU fishing. In defense of his claim, he said in 2017 alone, about 90 per cent of artisanal marine fishermen used illegal mesh-sized nets, noting that more than 70 trawlers on Ghana’s waters also use illegal fishing gears.

The thriving IUU fishing in Ghana, he explained, was happening because when offenders got caught, they had ways to avoid punishment, thus emboldening others to join in the illegality.

He said “Saiko”, for example, exceeded normal trawl landings in Ghana by 150 per cent in 2017, and that the volume of fish landed through saiko was equivalent to 57 per cent of landings of artisanal fishers in the same year.

Saiko is a destructive form of illegal fishing, where industrial trawlers target the staple catch of artisanal fishers (pelagics) and sell this fish back to local coastal communities at a profit. The practice threatens jobs and food security and endangers Ghana’s economy. What even makes the practice more dangerous is that industrial trawlers, licensed to harvest demersal (bottom-dwelling) species are now deliberately targeting the same species as the artisanal fishing community.

For Prof. Akpalu, Ghana needs to put in place proactive measures to stop IUU fishing since the sector plays a key role in the country’s economy. For instance, according to Ghana’s 2020 Co-Management Policy for the Fisheries Sector, the sector accounts for an average of 1.0 per cent of Ghana’s annual Gross Domestic Product (GDP) and provides livelihoods for an estimated 10 per cent of Ghana’s population who are directly or indirectly employed within the fisheries value chain.

Fish also constitutes an important source of animal protein in the diet of Ghanaians by providing 60 per cent of the animal protein consumed in Ghana.

Explaining further how IUU fishing practices are negatively affecting Ghana’s fisheries revenue, the Natural Resource Economist Prof. Akpalu said whereas the artisanal sector could potentially make a maximum yearly profit of $271 million, it was currently estimated to be making $169 million, thus losing about 37 per cent of the potential rents.

He said in the case of tuna fishers, they could potentially make a maximum yearly profit of $225 million but they were currently making $139 million, hence losing about 38 per cent of their potential rents.

Prof. Akpalu stressed that whereas industrial trawlers could make a maximum yearly profit of $78 million, they were currently making $37 million, meaning that they are losing about 52 per cent of their potential rents.

He said the semi-industrial sector loses about 19 per cent of their potential rents due to IUU fishing, pointing out that whereas they (semi-industrial) could make a maximum yearly profit of $21 million, they are currently making $17 million.

Prof. Akpalu, who also serves as the Dean of the School of Research and Graduate Studies of the Ghana Institute of Management and Public Administration (GIMPA), said IUU fishing had contributed to the fast depletion of Ghana’s fish stock, a situation he noted, had contributed to Ghana importing substantial part of its fish requirements.

He said Ghana only produces 41 per cent of its fish and that the country spent millions to import fish.

For instance, a publication by the Far Dwuma Nkɔdo project titled: “Principles of Good Governance for Securing Equitable and Sustainable Fisheries” stated that in 2016 Ghana imported at least 370,000 tonnes of small pelagics to shore up its fish needs, worth US$248.3 million.

Ghana’s Marine Police thinks that the lack of harsh punishment for IUU fishers was helping the illegality to thrive.

The Marine Police describes the menace as “endemic”, expressing their frustration that “There will be no sense in we [sic] arresting people and the people, being set free on flimsy excuses.”

According to the Marine Police, IUU fishing has become a specialty of some fishing communities in the country, and that the menace could only be stopped when the Marine Police are properly tooled as well as more command centres established at the various coastal communities.

Prof. Akpalu agrees with the position of the Marine Police, that the absence of harsh punishment has emboldened IUU fishers to continue their practice with impunity. According to him, when illegal fishers are caught and sent to court, they opt for the Alternative Dispute Resolution (ADR) where they are able to pay less fines relative to fines by the courts.

“Until the law works, these problems will be there,” he bemoaned, noting that Ghana loses over $200 million annually due to IUU fishing.

Under Ghana’s laws illegal fishing activities like saiko attract fines of between US$100,000 and US$2million, or a minimum of US$1 million for taking on board juvenile fishes, using prohibited fishing gears or fishing in prohibited zones (e.g. the Inshore Exclusive Zone reserved for artisanal fishers). Minimum fines can increase to US$4 million in the case of repeated offences. However, many offenders are able to find alternatives to beat such harsh punishments.

The Director of Ghana’s Fisheries Commission, Mr. Michael Arthur-Dadzie, said the Commission has put in place measures to prevent all forms of IUU fishing in Ghana, including Saiko.

He expresses worry that many people tend to pay more attention to Saiko as if it is the only IUU fishing practice in Ghana.

He thinks that paying too much attention to Saiko at the expense of other IUU fishing practices would not help to stop IUU fishing in Ghana holistically.

Although by-catch cannot be totally eliminated in the fishing process, it must be within acceptable limit. However, it becomes problematic depending on the species and volumes landed, particularly when trawlers are using illegal under-sized mesh nets and mid-water trawls to target the small pelagics for which they do not hold licences.

But for the Fisheries Commission, Saiko could be stopped if fishers use the right fishing nets which would “Eventually get them their target fish,” hence reducing the volumes of their by-catch.

Even though Mr. Arthur-Dadzie may be right in stating that Saiko has gained more prominence in the media than other forms of illegal fishing, it is because this practice usually involves foreign-owned trawlers specifically targeting fish that should be caught by artisanal fishers. Hence, many artisanal fishers who are pained by the activities of the trawlers using illegal means to harvest their target fish also find illegal ways to catch the fish, hence compounding the IUU practice and thwarting Ghana’s efforts to clamp down on IUU fishing on its waters.

Fishermen like Kodwo Sam, Opanyin Kojo, and Kwame, all based at Ekumfi Otuam in the Central Region, believe that duty bearers have not done much to stop IUU fishing in Ghana because they benefit from it in one way or the other.