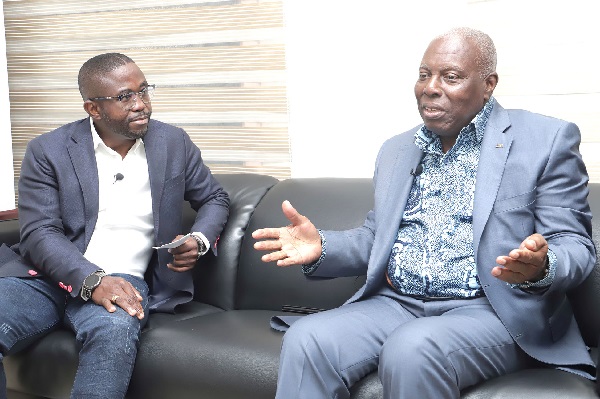 A Statesman and former Ghana’s Ambassador to the United States and Japan, Dr Barfuor Adjei-Barwuah, paid a courtesy call to the Daily Graphic. Charles Benoni Okine (CBO), acting Editor of the Graphic Business, caught up with him for an interview on a wide range of issues including the economy, politics and social matters. Below are excerpts from the interview.

CBO: Your Excellency, our economy was doing very well. Then struck the COVID-19 pandemic. Just when we were recovering, the Russia-Ukraine war also reared its ugly head and has destabilised a whole lot of things. Now, we are going to the International Monetary Fund (IMF) for some support. What are your views on all these and the government’s decision?

AB: Yes, like lots of other countries, we have had difficulties. Yes, like every other country, sometimes you do have a certain kind of difficulty with the economy but I, for one, would hesitate to pin our problems on the pandemic and the Russia-Ukraine war. If we are going to argue that we have a certain kind of difficulty because of that war then the grain that Ukraine produces, no one can argue that is what gives a basis for about 10 per cent of the food we eat. We are a country that has much arable land, and this is a country where you stick a cassava stick somewhere in there and you will be harvesting in no time.

We are a country that has no reason to be poor, but I think maybe our own view of what development is, how we should handle the economy, or making sure that, at least, internally we are self-sufficient, is what we have not even tried to handle very well. So even though the war and the pandemic have caused us problems, I don't think it should be up to the point that at the moment everybody you talk to tells you in the Twi version that 'Oman ne mu aye den", meaning times are hard. You know there are going to be times where there are difficulties, but then it is the interpretation of the difficulty and then the lack of a concerted action to rectify it. I won't say we tried enough probably both as a corporation and as a country. So I think going to IMF when we have said that we are never going to go to IMF constitutes a certain kind of unfortunate recession of our view of our own lives in our country's future. Now that one hurts, but it basically means that if it's hurting then we ought to be able to work harder to make sure that it never happens again.

CBO: Do you think we have the structures to maybe after this, not go back to the IMF?

AB: One thing that I've noticed is that it doesn't seem there is anything in national life in this country which does not have some kind of organisation taking care of it. I think it is the manipulation of the structures we have which constitutes whether people would work with governance structures, but that isn't working and that is what we have to seriously consider.

CBO: Many have argued that political parties only come in and try to implement party manifestos instead of considering a broader national development plan to help develop the country. Do you share that?

AB: Well, I think that generally those who share this view have a point. The thing is, it's a different thing aiming to do something and a different thing doing it. I think we tend to talk a lot and do very little. Even with the politics that we practise, we actually struggle to find the exact differences between the policies of the two main parties. So we sort of swim the same way except that maybe some put in more seriousness than others. I think we haven't been dispassionate enough to decide that we are building a country. What we've done over the years since independence is keeping the territorial integrity. And maybe internally we have sort of twisted one or two areas because at the moment we have about 16 regions. We started independence with how many? And the thing is, somebody has to really contend that decentralisation has actually improved the administration of the country.

So these are issues that we need to sit down and as a country, as a unit, decide that this is where we are going. And then if we manage to do that, there are going to be certain principal areas of our lives which will not change but they have to be tackled on the basis of changes in the world situation, changes in our population, structure and changes in our whole environment as an economic unit.

We haven't done the kinds of things that we needed to do and we still need to do. I brood over the fact that for the years that we have been independent, we have never had a policy of, for instance, deciding that for every single year, we will build 10 kilometres of first-class roads. If we did, we would have 600 kilometres of road to link up virtually all the regional capitals.

And I am passionate about Ghana's situation simply because a friend who grew up to become the foreign minister of one of the Caribbean countries said those of them who were taxi drivers in New York said they came from Ghana whenever they ran into difficulties with the police even though they come from Jamaica and other places.

He said “as soon as you say Ghana, the police will tell you to be careful next time because they don’t want to have a problem with that Nkrumah guy.” That was the kind of power that we had. We don't have it anymore and I think it is a sad commentary on our existence and we as a nation and it doesn't matter what political view you hold; you owe it to yourself and to the country to rebuild Ghana and this is where we should be looking at.

AB: Maybe the closest kind of forum that we have. The Council of State is supposed to be sort of non-political and even that people will have to have personal politics, but at least the picture, the image, is that this is a group that can sink their differences enough to be able to advise the government. Now, the economic part of it doesn't have to reflect the ruling party. It doesn't have to reflect in a sectional interest in the country.

It has to reflect a certain kind of capability of a certain group of people who ought to be able to help walk the path of development for the country. It cannot be political. If it was a political service, then you would not need the government in terms of a Cabinet because then they will be doing virtually the same thing. I have a feeling that maybe that isn't the understanding that prevails in that kind of forum. And I think in all this, we seem to have lost the fact that he may be CPP, KTT or whatever but the essence of your charge is Ghana. So whatever you do, even if you disagree with me, you have to have faith in the possibility that after whatever differences what I'm driving is supposed to suit all of us.

That is not to say we should lose political structures, but then I do believe that the ambassador's prime responsibility is playing the politics. It is more or less utilising your relationship with authority to engineer a certain flow of economic support into your country.

CBO: Ghana trades a lot with foreign countries, such as Japan and US, but it seems there is a difficulty trading among ourselves within the sub-region. We have this AfCFTA now. Can this agreement achieve its purpose?

AB: Well, it isn't going to be easy but it is something that we have to do because when you think about the fact that even these days if you want to go from Accra to some of these African countries, you may have to switch transportation in Europe. There was a time when Ghana Airways was called West Africa's local airline because Ghana Airways was going virtually to every African country and West Africa in particular. Now, well, there's no Ghana Airways so connectivity is our problem. It's a big problem for us. Besides that, I don't understand why Africans tend to be so suspicious of other Africans. Rather we relate well with other people - maybe it's part of what people usually call a colonial mentality or what have you but we are a continent with this huge population, a continent we know the other countries will be gunning for in terms of markets.

We aren't trying enough to make sure that the exchange system between us is advantageous. How many people will tell you that they are in Ghana and they export yams to Sierra Leone or the Comoros or wherever? This is a country where we don't respect the kinds of things we have because we take them for granted. I'm not somebody who goes out very often but I'm always intrigued by the patronage for many restaurants, even American fast food chains and that kind of thing, as opposed to our known Ghanaian food.

CBO: Doc, let's come to Ghana and the sort of political governance we have. The free SHS is a big topic now. What do you say about this free SHS policy?

AB: I think a policy that gives free education up to a certain level is a good idea. Maybe the difficulty arose because the planning and implementation did not go right. Personally, I think that we could have serialised it because if you want to make primary education free, then you need to make it attractive enough for it to be free. I have always believed that we must make it possible for children to want to go to school.

I think it is the implementation that we got wrong and, therefore, we may have to review that. Even though it might bring a bit of political anguish we still have to. It's like a bitter pill; if it will kill the disease, you might as well have to try and take it.

CBO: If you say review, review it in what way?

AB: We need to review it in terms of: one—we have to either put in more money to rectify even the physical plant aspect of the school building and all that.

Two, we need to assess and decide that we have to do this and that for teachers for them to find the profession attractive and then of course, we have to provide the learning resources to keep people interested.