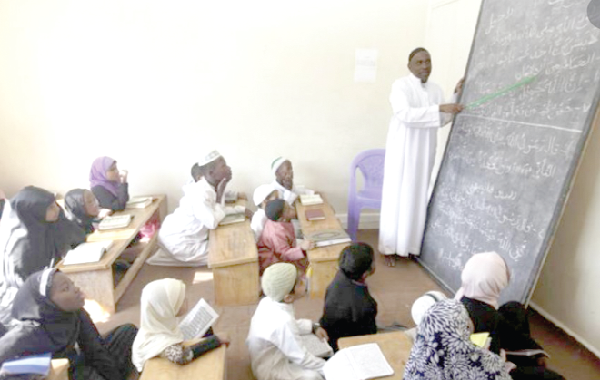 Pupils being taught in a classroom
30.5k Shares

Despite the positive contributions it has made to the growth and development of Ghana, Islamic scholarship has since the 1960s lacked socio-cultural legitimacy because many traditional Muslim scholars who studied abroad ignored the task of rethinking legal methodology to this effect.

Lack of interest in the theological-ethical underpinnings of the Ghanaian social setting is a major drawback of the seminary education in most of the pure Arabic/Islamic schools (Madrasas) in Ghana. The anti-rationalist approach of many of the returnee scholars further worsens the situation. Many of them showed no interest in defining the peculiarity of the Ghanaian social structure in their religious teachings and propagations.

For decades, Islamic scholarship in Ghana was largely led by legalistic Traditionalists who strictly adhere to the views and opinions of the classical and pre-modern Muslim jurists and theologians (at-Tābi’ūn Wa tābi’ at-Tābi’īn) and uphold their interpretation of the Islamic sacred texts. Any ‘new’ opinion is considered a grave contradiction to the principles and tenets of the Islamic faith and an attempt to ridicule the classical and pre-modern Muslim jurists whose works have been canonised in many Muslim societies across the globe. For the legalistic Traditionalists, the classical and pre-modern Muslim jurists and theologians whose knowledge of the faith overflowed the cavernous warehouse are the epitome of Islamic sciences (Hum ar-Rijāl) and had provided answers to ‘all’ religious questions. Muslims across the globe must, therefore, embrace their teachings, especially when the gate of Ijtihād has been closed.

Ijtihād is an exertion of efforts in issuing an Islamic legal opinion to deal with an issue or answer a question that has not been dealt with by the Qur’an and the traditions of the Prophet (PBUH). This kind of legal initiative is not an open beach for anybody who thinks s/he can swim. Rather a Mujtahid (person who makes Ijtihād) should have an in-depth knowledge of the Qur’an, the traditions of the Prophet, the Arabic Language, the customs, and traditions of the society in which s/he lives, and above all, s/he must be conversant with the nuances of the intent of the Islamic Law (Maqāsid ash-Shar’iyya). It is the fulfilment of the above qualifications that permit one to dive into the subject of Ijtihād.

Legalistic Traditionalists engage in text-based Ijtihād which is a method of Ijtihād practised by classical and pre-modern Islamic scholars. Thus, when faced with a new issue, these scholars search for a possible Qur’anic verse and/or the traditions of the Prophet (PBUH) and apply it to the given issue. To ensure conformity with tradition, a literal interpretation of the literature is strictly followed.

In addition to upholding the position of the legalistic traditionalists, political Islamic scholars believe in initiating projects that will reinstate, spread and concretize the ‘original’ position of Islam and its role in the society. The subject of loyalty is the staple that binds their sermons and is vigorously taught to their followers.

This Islam - society relationship, according to these scholars was eroded as a result of westernization. For them, the legitimacy of the state is divine, and therefore, only people with superior Islamic knowledge must be allowed to form the government of a state, or in the Ghanaian case, occupy all the chieftaincy positions in Muslim communities. Put differently, since political offices are meant for public good, only adherents of their brand of Islam can plan, organize, coordinate, make, and take decisions for the general good of Muslim societies.

Political Ulamā are heavily tenacious to religiosity, which is an engagement in an open show of piety all in an attempt to adduce their superior level of faith. To this end, stereotypical response is their modus operandi in the propagation of the Islamic faith. They would make no attempt at engaging in intellectual discourse to clarify the legal rulings of certain ‘complex’ and ‘controversial’ issues but will quickly hail flurry attacks on any person whose interpretation of such issues contradict their understanding.

These usual fiery reactions have occasioned the silence of the highly educated Ghanaian Muslims who fear being attacked ad hominem, a situation that has caused Islamic scholarship in the country to suffer a relapse. The reason they engage in this vitriolic tactic is to muffle other voices and preserve the literal interpretation of the sacred texts, a badly thought-out scheme from political Ulamā clutching at straws.

This development led to ‘crisis’ in Islamic scholarship, a situation that still characterises Islamic discourse in Ghana. Contemporary Islamic discourse has tried to come to terms with this ‘crisis’ by constructing a new place for Islam within the rapidly changing environments of the globalised world. The crises led to a new crop of Muslim scholars known as the revivalists.

These scholars saw the need to [re]activate the concept of Ijtihād to pave way for re-interpretation of certain Islamic norms and principles to conform to the Ghanaian socio-cultural setting, meet the challenges of the globalised world, and revive the enviable Islamic culture and disciplines that have eroded in Muslim communities in Ghana. These groups of scholars categorically rejected the notion that the gate of Ijtihād is closed and Muslims across board must adhere to nothing other than the teachings of the classical and pre-modern scholars.

In their attempt at modernising Islam to meet the challenges of the modern world, they promoted Islamic pluralism by encouraging Muslims to move away from their rigid positions to a more flexible state of accepting new, modern, radical, and different interpretation of the sacred texts. This they did by considering the general interest of the Ghanaian state (al - Maslahatu al- ‘Āmma) and the pressing needs of the Ghanaian Muslim societies (Awlawiyyātu-l Muslimīn).

This effort led to the emergence of Islamic Intellectualism; a concept I use to denote Islamic scholars who sprouted in the late 1990s. The progressive ijtihādists constitute contemporary Muslim scholars who joined the Islamic discourse from diverse educational background and orientation. These groups of scholars cannot be found under any one umbrella, but rather spread across spaces and fields expressing their intellectual Islamic opinions on how to get the religion not only to conform with contemporary times, but also adapting to nuances of globalisation while still preserving the true state of the faith. The experimental spirit of the progressive ijtihādists vanguard pushed Islamic discourse to a more critical analysis of issues. Under the hallowed cloak of superior secular education, progressive Ijtihādists expressed themselves freely, and continuously made it very clearly that the progressive approach to the sacred texts is the only method that could save Muslim intellectuals from schizophrenia.

The Progressive Muslim scholars engage in context-based Ijtihād. Thus, when a new issue emerges, they begin by doing extensive analysis of it, find out the dynamics, characteristics and implications to the general Ghanaian society and the globalised world. Therefore, even if they realise similar issue had existed during the reign of the Prophet (PBUH) or his successors (al-Khulafā ar-Rāshidūn) and a solution was find, these scholars will consider the realities of contemporary times and adopt a ‘strategic’ way (Ijtihād) of ensuring the general interest (al-Maslahatu al-‘Āmma) of the Ghanaian society.

Public interest (al-Maslahatu al-‘Āmma) is the situation in Islamic law where a particular solution is chosen over another mainly because the chosen one is possibly the best in relation to the issue under review, although it could be the weakest on technical ground. This shows how the welfare of the society is paramount in Islamic legal discourse of the progressive Muslim scholars.

Under the teachings of the legalistic traditionalists and political Islamist scholars, Muslims live a life characterised by a binary impulse. This is where Muslim communities are engulfed in a jingoistic state and intuitions of “us” whose Islam is the true religion of God, and “them” who are virtually lost and practising an untrue religion, or and most probably, are people of no religion.

With the advancement of the lives and works of progressive Muslim scholars, this negative psycho binary impulse is gradually reforming the Ghanaian Islamic scholarship into an “us” “us”. Progressive Muslim scholars project the concept of at-Ta’āruf which is used in the Qur’an to mean good social intercourse, excellent human relation, a generous sense of humour that needs to govern human relation of all people without regard to race, colour or religion.

To ensure at-Ta’āruf is achieved, individuals are highly encouraged to be self-discipline in their dealings with others, be open minded and honest in their discourse, avoid unnecessary provocations, spying and eavesdropping, abstain from fallacious and ill-conceived conclusions, and generally “do unto others what they expect others to do unto them”. It is only when at-Ta’āruf is fervently pursued that humanity can live in peace and prosperity, which is the primary objective of all the three Abrahamic religions (i.e., Judaism, Christianity and Islam).

To be continued next Friday.

The writer is the Founding President: Centre for Islamic Thought and Civilisation