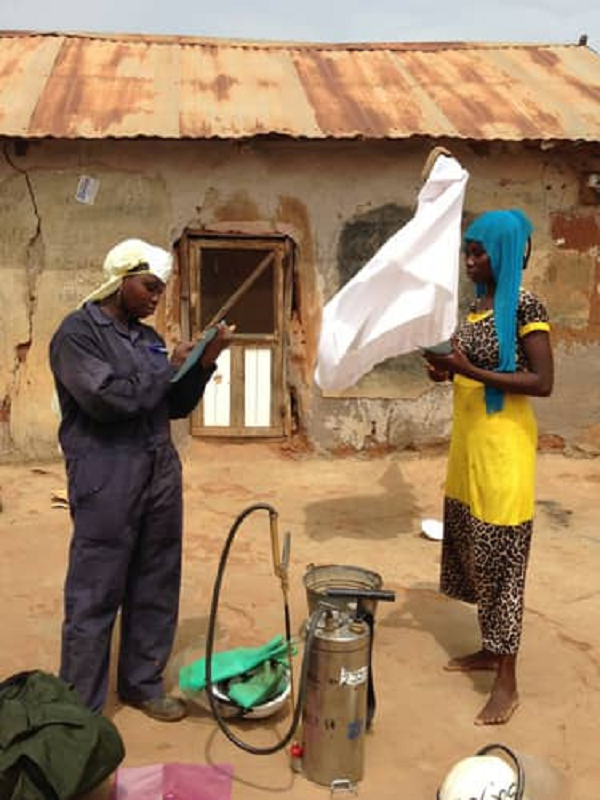 “The periodic Indoor Residual Spray exercise is very good because it helps to kill the mosquitos and we are comfortable with it. Although the bed net is very effective in preventing mosquito bites, I feel discomfort when I sleep in it.” These are the words of Mrs Ayishetu Alhasssan, a resident of Gbimsi in the North East Region.

According to her, unlike the other malaria control interventions that some people including herself do not feel comfort using them, the periodic spraying of rooms and structures was very effective because after the exercise it takes some time before she experiences mosquito bites.

Her experience is not different from that of Mr Adam Salifu, a resident of Sakogu in the East Mamprusi who said “these days, I hardly see mothers rushing their children who have severe malaria and are convulsing to the health facility since the commencement of the IRS exercise”.

He called on the Ghana Health Service through the National Malaria Control Programme to consider scaling up the exercise in other districts to help eliminated malaria in the country.

Ghana is among the 15 highest-burden malaria countries in the world with three per cent of global malaria cases and deaths.

To control the endemic disease, the National Malaria Control Programme (NMCP) and its partners undertakes periodic indoor residual spraying as well as encourages people in mosquito endemic areas to use bed nets, which are the most effective ways to control malaria.

This involves spraying an insecticide on the ceilings and walls of homes, where the malaria-carrying mosquitoes rest after feeding. The insecticide kills the mosquitoes, preventing the further spread of the disease. The US President’s Malaria Initiative (PMI) directly supports IRS implementation in selected districts in the Northern Region (now North East, Savannah and Northern Region).

The North East Regional Malaria Focal Person, Mr Mark Abugri said IRS exercise since its implementation had reduced prevalence of malaria and improved health and livelihood of people living in the area.

“The Indoor Residual Spray program periodically sprays the rooms of the residents to protect them against malaria, though we are doing our best as a region with support from our partners to control malaria, it largely depends on the attitude of the people because the way they use the nets and manage the environment matters” he stated.

A study conducted jointly by the World Health Organization (WHO) and the Ghana National Malaria Control Program [Aregawi et al. Malar J (2017)] revealed that between 2005 and 2015 all districts where IRS was implemented, a significant reduction 47% of malaria cases as compared to non-IRS districts.

“In districts where IRS was implemented, a significant reduction (47%) over a the ten-year period in the number of malaria cases, and a greater impact on key malaria indicators was observed as compared to non-IRS districts.

Ms Otubia Akrofi, a lead person for the IRS and Larvicide programme in an interview said the exercise was done once every year and that chemicals had an efficacy of 5 to 10 months, adding that the spraying was often done at peak of malaria.

She said the exercise had proven to be a very effective intervention to combat malaria, and that plans were in the offing to secure enough funds to scale up the programme to all mosquito endemic areas across the country.

Malaria is an endemic disease in Ghana. This makes any effort which reduces malaria worth celebrating. With the experiences shared by some of the North East residents, it gives hope that with upscaling of the IRS exercise and other interventions, the future of the country looks brighter in achieving zero malaria deaths.