In support of anti-LGBTQ+ Bill 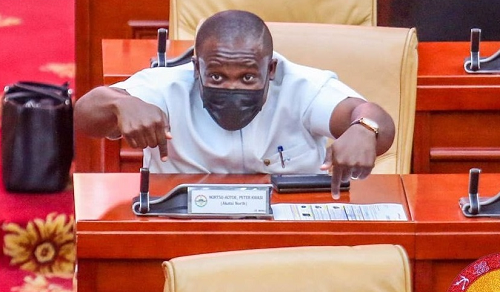 Mr Samuel Nartey George, Member of Parliament (MP) for Ningo-Prampram, one of the six MPs jointly sponsoring a bi-partisan Private Members Bill for Parliament to pass specific legislation to expressly prohibit and criminalise the practice or advocacy of homosexuality in Ghana.

A well-coordinated and generously financed global assault is underway to coerce the entire world to accept a sinister agenda to realign the natural human order pertaining to sexuality and gender.

Having inflicted itself on western societies, the so-called LGBTQ+ movement is now on a global rampage relentlessly pushing to mainstream this perverse sexual agenda, especially in the developing world.

Fortunately, the moral majority is fighting back, and in Ghana, the counteroffensive is on with all guns blazing. The anti LGBTQ+ bill called the Promotion of Proper Human Sexual Rights and Ghanaian Values Bill, which is now before Parliament, is a shot across the bow to this fringe group which has the effrontery to believe that it can impose this monstrosity on the rest of humanity.

Apologists of the LGBTQ+ movement invoke the human rights argument in defence of the group. They have even chided Ghana’s Parliament for giving what they claim to be unnecessary urgency to the anti-LGBTQ+ bill when, in their opinion, there are more important bills in the parliamentary queue.

But the counter-argument is that advocates of LGBTQ+ rights are shouting their voices hoarse in defence of these fringe elements while turning a blind eye to the plight of the teeming masses of unemployed, the destitute and hapless poor in Ghana.

Clearly those in this latter group are being denied their most important fundamental right, the right to life, because the system has failed to provide the conditions for them to earn their livelihood.

As such, they are compelled to stay idle, hungry and susceptible to premature death. This is what should rather preoccupy the minds of the human rights advocates of the LGBTQ+ movement.

One of the most insidious dimensions of the LGBT+ agenda is that it has no off-switch. With more and more fringe sexual groups trooping into the fray, it is impossible to predict when the plus sign in the acronym will be dropped.

The latest queer elements advocating for inclusion are the zoophiles or zoosexuals. These are people who have a sexual attraction to animals such as dogs, pigs, horses and other such creatures. Indeed, there have been reports of functioning bestiality brothels in Europe.

Closely linked to the zoophiles are the therians who believe and feel they are animals. Next are the furries who have an adoration for only certain animals such as foxes, wolves, dragons or cats, and would actually show off their animal persona by wearing replicas of a particular body part of the animal they adore. Both groups have applied to join the LGBTQ+ movement.

Those in the transgender subgroup of the LGBTQ+ movement argue that they are trapped in the wrong body, and actually transit to the other gender through medical procedures.

Since therians also believe they are animals in human bodies, one wonders what rights they will soon be demanding in order to satisfy their lunatic indulgence. If transgender is acceptable, then trans-animal could also well be, in a society of open-ended human rights.

The race to perdition seems to know no bounds.

At this year’s Tokyo Olympics, the International Olympic Committee allowed transgender athletes who were previously able-bodied males to compete as females. The IOC claimed that its decision was driven by human rights and fairness. Really? It looks like the lunatics have taken over the asylum.

It is true that railing against the LGBTQ+ movement has economic consequences, especially for poor countries. The group’s coercive powers are overarching, permeating almost all important international institutions as well as donor agencies.

This is why NGOs, CSOs and academic institutions which depend on the largesse of such foreign donor agencies are under pressure to speak out against the bill before Ghana’s parliament.

The arguments they make about human rights are very much appreciated, but it is also about which side of their bread is buttered. And while we appreciate the argument that academics should keep an open mind, we should be wary of opening it so wide that our brains fall out.

This is a price Ghanaians should be willing to pay as our contribution towards the protection of the sanctity of the natural order of the human race. Equally important is the fact that the expected economic squeeze could well be an opportunity to pivot our country away from economic dependency and towards national self-reliance.

Samuel Nartey George and his colleague parliamentarians who have initiated this bill can rest assured. The overwhelming majority of Ghanaians admire their courage, and are solidly behind them.

In considering the bill, we expect our legislators to be guided by the need to provide a solid framework for the promotion of social norms that fit naturally into the human person and which reflect natural human sexuality.

Pandering to the LGBTQ+ pressures will only sow the seeds of sexual commotion with disastrous consequences for future generations. We should all be mindful of the type of society we wish our children to grow in.

The writer is with the Islamic University College, Ghana.