RexDanquah: Hon E.T. Mensah, not the musician, earned my respect for life 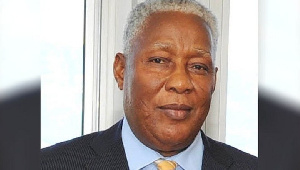 THERE are so many shades to this life here on earth that if you lack the sense of humour, fairness, justice, reasoning, humility, grace and appreciation, you might end up being too judgmental much to your own downfall.

Out of the twenty-six (26) Ministers appointed by various governments as responsible for Sports since 1978, I have worked with seventeen (17) of them and for the purposes of history I want to select Hon. E.T. Mensah who was the Minister for Youth and Sports from 27th April, 1993 to 6th January, 2001 for special mention. This is because I locked arms with him when he was the CEO of the Accra Metropolitan Assembly (AMA) before his elevation to the Ministry.

For purposes of history, permit me to quote two others that I worked with at the Ministry: the first being Hon. Osei Bonsu Amoah, MP and then Deputy Minister at the Ministry –

“RexDanquah as I have known him for almost twenty years, has
distinguished himself in various fields of endeavour and proven
to be a very reliable, affable and gentle person.

Either as a professional, on a personal level or with the larger
society, RexDanquah has proven to be selfless, dedicated and
patriotic.

As a professional, he has been extremely reliable and committed
to providing excellent services in respect of the numerous events
and programmes he has been entrusted with. His leadership and
management skills have led to very highly successful outcomes at
domestic and international levels.

I’m privileged and proud to have known such a faithful and true
person whose modesty leads him to operate on the quiet, preferring
others to take credit in the interest of the larger group.”

The second person is Hon. Papa Owusu-Ankomah, MP and then Minister for Education, Science and Sports (8th May, 2006 – 6th September, 2007 after a short stint as Minister for Youth and Sports in 2001), who also had this to write about me:-

“Having grown up with you in Sekondi almost 50 years ago, being
together at Mfantsipim School in the late 1960s and early 70s, I
recall him taking me under his wing like a younger brother.

I recall with pride, the stellar role you played in the successful hosting
by Ghana of CAN 2008 and characteristic of him, shying away from
any undue publicity. During the period of preparation as the Minister of
Education, Science and Sports he always prevented me from publicly
acknowledging his singular role.”

I have gone to this extent to set some precedents for what I want to write about how certain behaviours over time define exactly who we are or how others perceive us to be and in several instances, they are not far from the truth about us.

My friend, Ambrose Atto Esiam of MOBA 1982 Year Group had this to write about me on my 66th birthday recently:-

“Senior, I do not know what to say.

You are a selfless one out of a million. Freedom Fighter, one man
thousand. Keep on fighting, fighting for the rights of others and
fighting for what is right.”

There have been several instances that people have sought to take credits for things that they have no idea its genesis like the current GFA building or the CAN 2008 beginnings, which both the Hon. Papa Owusu-Ankomah and Hon. O. B. Amoah have alluded to, and I have kept my silence because posterity is the better judge.

I worked on the CAN 2008 Bid for 3 – 4 years quietly before anybody had a sniff of it at my then Kaneshie Industrial Area, funding every aspect of the process, and indeed it was in the last quarter of year, 2007 that the expenses made by my Agency were reimbursed.

Even as I am writing this article, my Agency is yet to be paid in full for expenses made in respect of the 13th African Games scheduled for Ghana in 2023.

One day soon, the story of the African Games will also be told in full.

Unfortunate though but the hard fact.

It is for the same reason that you would easily laugh off anybody wanting to take credit for the Games; much more anyone wanting to take credit for the current GFA Building – I sourced it for the CAN 2008 Bid process, when it was part of the former GNTC assets from the Ministry of Works and Housing, except that I was directed by the MOYS to share with the then GFA under the Chairmanship of Dr. Nyaho Nyaho Tamakloe and I backed out of it for very good reason. But the record of the truth is that I secured it for the Bid Committee.

Indeed, even for Ghana ’99 African Youth Football Championship, I secured the former Civil Servants Building for our use before handing it over to the GFA under Lepowura Alhaji M.N.D. Jawula to use as their offices.

So to the Hon. Enoch Teye Mensah story…and not Emmanuel Tettey Mensah (also known as E.T. Mensah), the Musician – was a popular slang of a writer in those days when writing about E.T. Mensah, the politician.

My Hon. E.T. Mensah adventure started when he was the Chief Executive of the Accra Metropolitan Assembly (AMA), during the time of the PNDC military regime, or the Mayor of the City of Accra. I wronged him in the most unforgiving manner before we had the matter resolved in a meeting with Hon. Kofi Totobi-Quakyi, then PNDC Secretary for Information and Hon. Kwamina Ahwoi, then PNDC Secretary for Local Government, somewhere in the year 1991-1992, when I was the Editor-In-Chief of the GJA award winning weekly, ‘PUBLIC OPINION’.

Even though the matter was amicably resolved, I thought like the typical Ghanaian, our paths would never cross again under nicer circumstances for very good reason that our politicians don’t even forgive, especially not under the circumstances that led to the settlement.

One day in the year, 1992, I had visited the UK for a series of meetings and a conference, staying the evening with a very great friend and my former lecturer at the Department of Land Economy and Estate Management, KNUST – Dr. Daniel Duodu Yamoah, when the phone call came, long distance, and it was Hon. E.T. Mensah, looking for me.

Baffled at how on earth he could know where I was that evening in the UK to call me at that unholy hour, even to date still is worrying for security reasons, especially not for somebody I wouldn’t say he was my friend.

When I took the receiver from my friend and offered the usual salutations, he was very straight with me: He was going to be announced the new Minister for Youth and Sports soon and he knows he will need my services and advice to make him succeed; he had been looking for me for the past days, only to be told that I had travelled to the UK. Went hunting for my number till he got and hence the call.

Without any hesitation, I offered to assist and also that as soon as I was back in Accra, I would see him ASAP; and I did.

Hon. E.T. Mensah taught me a lesson in what most politicians’ lack - an enemy is for life, no matter what he could bring to the table to support the administration. In my mind, I had broken or breached the most sacred of his oaths as a human being; and yet consider the extent he went to invite me to assist his tenure as the Minister of Youth and Sports.

And by this, Hon. E.T. Mensah earned MY RESPECT FOR LIFE.

And yet still, every good thing has an end, for the day, years later that Kwabena Yeboah, the then Editor of the ‘AFRICA SPORTS’ weekly wrote in his paper that “EVERYTHING ABOUT E.T. MENSAH WAS REXDANQUAH”, this innocent statement brought the house down.

I remember an earlier agitation by some staff of the then NATIONAL SPORTS COUNCIL (NSA), led by its leadership complaining to the Minister, Hon. E.T. Mensah of what special skills or knowledge I had that the NSA didn’t possess to make him RELY on me to the extent that he did.

For good reason, he called me, told me about the agitations and we both agreed that I stayed away for a while. Unfortunately, there was an exercise that he had given to the NSA to execute and they had not been able to perform. He then asked the then Chief Director, Mr. D.D. Obiri with another person to come to me and see how to execute the assignment. After receiving the 2-man delegation and finishing the exercise, the NSA person confessed to being part of the agitations and to admit that “I was indeed, truly worthy of all of Hon. E.T. Mensah’s trust”.