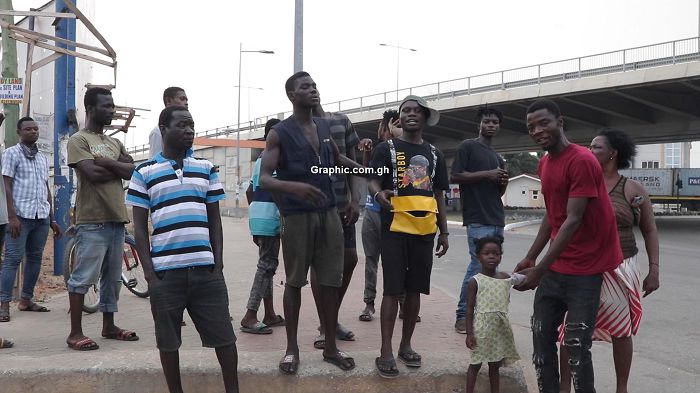 There were shockingly too many of them congregated out there on January 1, 2021. It set me thinking and wondering if those young men and women I was seeing on the streets were merely hanging out to celebrate the first day of a New Year.

They were not, that is the bare fact. They were a homeless lot with no fixed abode and blatantly defied COVID-19 protocols.

A New Year’s Day afternoon ride through some parts of the city, Accra, presented me with a shock. Yet another feeling of failure from the social welfare system, I thought. It was the least I expected to see on a quiet relaxing New Year’s Day.

It confirmed to me the reality of the never-seems-to-be-going-away dire situation we have on our hands — the growing number of homeless youth.
They have no place they can call home even on festive occasions, to celebrate family get-togethers.

The particular route I took as I headed towards Movenpick from Accra West meant passing through the Abossey Okai Mosque, to Graphic Road towards the National Theatre traffic lights. Crowds of youth, children and a few elderly were out there in their numbers.

Later on my way back, I went through the Kwame Nkrumah Circle underpass towards Kaneshie and got confronted with a similar sort of assembly. In this era of a fierce second COVID-19 surge, there were no signs of safety protocols in place.

The reason for their being out there in their numbers, I gathered later, was to wait in anticipation for free lunch packs distributed by some benevolent individuals and organisations to the homeless.

No doubt the problems of urban drift and child neglect by some irresponsible parents have brought us where we are now. This is a situation that can lead to human catastrophe for the country if proper care is not taken.

Homelessness may not be new. Even in advanced countries where welfare systems are deliberately planned and nurtured, people still live on the streets.

However, what makes it alarming for us here is the nature of the homeless. They usually involve the youth and sometimes children of school age. Having them out on the streets on a New Year’s Day when families bond together reflecting over the New Year is a sad indictment.

All things being equal, the Department of Social Welfare should be taking giant strides to get these children and youth into more shelters while preparing to reintegrate them with their families. Where necessary, irresponsible parents should be sanctioned and put before court for child neglect. One is yet to see or hear of any such action which could serve as deterrent to parental neglect in our communities.

The situation naturally is of concern to some benevolent citizens. Out of the abundance of their hearts, they take it upon themselves to take some of such homeless youth home to give them shelter, clothing and food. However, experience being the best teacher, many more who would have loved to extend some kindness have had to pull back.

Unfortunate stories with homeless youth have been recounted from pulpits and sometimes as testimonies by some people of faith. These people had in times past, taken in some homeless boys and girls to help give them decent lives, including education and life skills.

Unfortunately, their good intentions were paid back with evil deeds.

The beneficiaries took advantage of the benevolence received to rob their benefactors. Sometimes it was not just robbery; they visited other nasty acts on the household. No doubt, there are good ones who stay and exhibit good behaviour to their own benefit.

On my drive back home on New Year’s Day, I encountered some benefactor, who perhaps rather than take anyone home, had brought packed cooked food to distribute to many of the homeless gathered. That, no doubt, confirmed all the pockets of gatherings I had earlier encountered that afternoon.

If for nothing at all, my outing brought home to me one key point — that we have an increasing number of homeless youth and children out there.

The Department of Social Welfare started in 2018 to clear children from our streets.

They promised to do more swoops to completely eliminate child homelessness.

Now we see homeless children and the youth back in their numbers on our streets. What must have gone amiss with that promise as one faces a fierce come back of the coronavirus which makes the unprotected very much at risk?