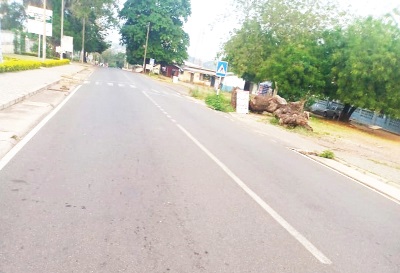 The Volta Regional capital, Ho, is known for its spotlessly clean streets, which holds first time visitors to the municipality captive.

Ho is also referred to as the “Oxygen City of Ghana” due to its environmentally friendly status.

Lounging between the Galenku Hill to the north and the Adaklu Mountain to the south, Ho’s scenic beauty is enhanced greatly during the rainy season by the thick and awesome green vegetative cover on those escarpments.

The regional capital is also revered for its peaceful, serene and low-crime rate.

In recent times, however, that beauty is being marred by the nasty and indiscriminate erection of signposts and the hanging of posters at various junctions in the region capital.

Posters of obituaries, pending events, admission processes of schools and herbal services are competing with signposts for space at the various junctions in Ho, in defiance of the assembly’s bye-laws.

The impudent trend is on the increase in spite of growing protests from local residents and motorists who complain that the posters are not only obliterating their view at the junctions but are also posing grave danger to other road users. 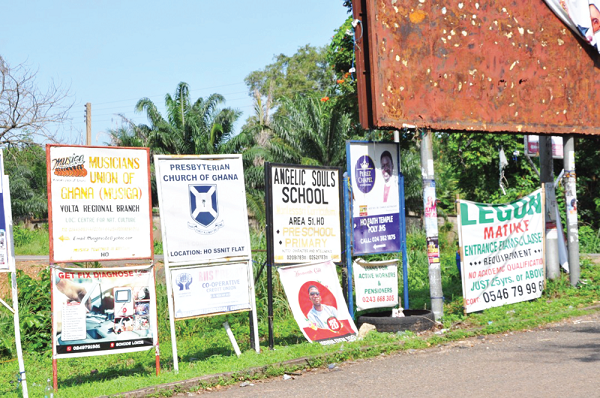 On stormy days, some of the signposts fall in the middle of the road and get carried about by the strong winds.

Some of the giant signposts are now rusting and tilting gradually towards the ground, indicating imminent danger.

In weird instances, obituary posters are pasted on electricity transformers, leaving many with more questions than answers.

A resident at the Ho SSNIT Flats, Kwaku Nsiah, said the posters at the junctions had tainted the beauty of the streets of the regional capital.

He said they obliterated the view of many homes near the junctions and made life unpleasant for the occupants of the houses.

He said apart from the sordid scenes at the junctions, the posters sometimes fell onto the streets, turning them into litter spots for long hours and sometimes days.

A taxi driver, William Dogbey, said the posters were a nuisance because they blocked the views of cabs at the various junctions.

“It becomes very difficult for us to see the main road clearly, without knowing which vehicles are coming from the right or the left,” he added.

According to the driver, some of the posters and banners got carried away on windy days, with some falling onto the windshields of vehicles.

“That makes them a constant danger to road users,” he pointed out.

Another resident, who preferred to remain anonymous, said it was mind-boggling that churches, educational institutions and political parties were among the groups which engaged in the unlawful practice with impudence.

After public outcry, the Municipal Chief Executive (MCE), Divine Bosson, has stepped in with a 15-member task force to address the issue immediately.

Apart from removing the unauthorised posters and sign posts, the task force will also go after the offenders and prosecute them without delay.

The MCE told the Daily Graphic in an interview in Ho a fortnight ago that it was an offence to paste or hang banners and erect signposts without the approval from the assembly.

He said the assembly would not compromise the environmentally clean and “Oxygen City” status of Ho.

For that matter, he said the task force, which is made up of personnel from the Physical Planning Department and Finance and Administrative Committee of the assembly, would be very swift and ruthless in their duty.

Mr Bosson stated that the erection of signposts, banners and posters could not be done in the municipality without approval from the assembly.

The approval, he explained, must be preceded by the payment of the stipulated fee to the assembly.

“It is the duty of the assembly to ensure that such features do not pose danger or nuisance to the public,” he maintained.