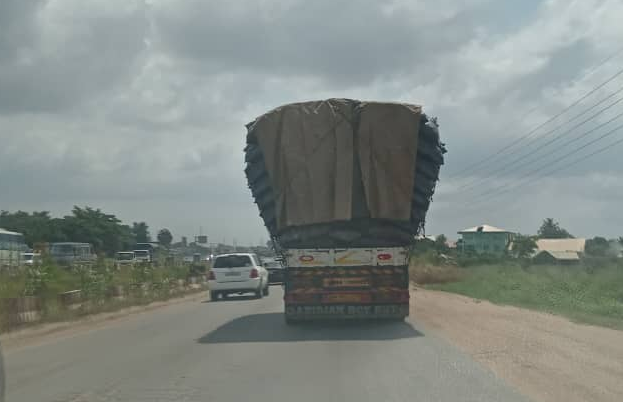 A cargo vehicle loaded with charcoal

Heaps of firewood and charcoal welcome every visitor to almost every community in the northern part of the country.

They are piled up along roadsides not to decorate the communities, but to attract buyers along the various routes.

Upon entering the communities, one is first greeted with the firewood and charcoal. Travellers most often stop to buy the charcoal for domestic use, while commercial firewood users troop to the communities to load trucks with the logs to the cities.

A recent tour of communities such as Dalogyili, Sambu, Sang, Kadelso, Wellembelle and Wulugu, all in the Northern, Savannah, Upper West and North East regions, saw large quantities of the fuel wood piled up in the areas.

While some residents were using it for only domestic purposes, majority of the people were seen engaged in the firewood and charcoal trade.

Checks by the Daily Graphic showed that averagely, a truck full of firewood was being sold at GH¢300 whereas a bag of charcoal was going for GH¢20.

Firewood and charcoal are the major sources of energy in the rural areas and to some extent the peri-urban and urban areas as they provide 50 per cent of the total domestic and industrial energy needs of the country.

They are also the preferred energy source in some cottage industries and for some commercial activities. Fuel wood and charcoal have also become a major source of income for rural inhabitants, particularly women, as most of them depend on them for survival.

Alluding to this fact, a 35-year-old woman at Wulugu in the West Mamprusi Municipality of the North East Region, Mrs Rafiatu Adam, said she had been engaged in the trade of firewood for the past 10 years and that was her main source of livelihood.

“This is the business I do every day to feed my family; I don’t have anything doing apart from this. I always go to the bush and fell the trees and dry them for sale,” she said.

Asked whether she was aware of the dangers of felling trees, she retorted, “I am aware that it is not good to fell the trees but what do you expect me to do when there is no other source of income?”

Another resident of Sambu in the Northern Region, Ms Asana Yakubu, said she had been compelled to engage in the charcoal and firewood business because there was no alternative source of income for her, saying, “If I am able to get enough money, I will use it for another business and stop selling the firewood because it is not good.”

Since firewood and charcoal are sourced primarily from forest resources, they constitute a major driver of environmental degradation and climate change as people continue to fell the trees indiscriminately.

Already, the effects of desertification and climate change are evident in the areas as some water bodies are drying up while the vegetation cover is fast depleting.

In the Mion District for instance, the area is threatened by forest depletion, desertification and drought. The district, which is the fourth largest in the region, registers poor annual rainfall culminating in poor yields which can bring about food insecurity and poverty.

At the commemoration of the 2021 World Day to Combat Desertification and Drought (WDCDD) at Sambu last month, the Paramount Chief of the Mion Traditional Area, Mion Lana Abdulai III, bemoaned the indiscriminate felling of trees and bush fires which were depleting the vegetation cover of the area.

He, therefore, urged the people to desist from felling the trees and partake in all the initiatives being undertaken by the government to combat desertification and fight climate change.

Checks revealed that some rural women venture into firewood and charcoal production and trade due to poverty and a lack of viable alternative livelihood options.

They view the practice as a viable business opportunity with low entry barriers as trees growing in the bush are generally easy to access with no or less capital requirements needed.

A Climate Change Activist, Hajia Alimatu Sagito, was of the view that to be able to effectively combat the indiscriminate felling of the trees, there was the need to introduce alternative sources of fuel and livelihoods for the women. “Some women engage in the firewood and charcoal trade as a complementary source of income, so it is very difficult to stop them, but if we build their capacity and introduce them to innovative ways to generate income, I think they will stop felling the trees,” she stated.

She said although the government and various stakeholders were doing their best to restore the vegetation cover of the country, especially through the Green Ghana project, there was the need for them to incorporate the introduction of alternative livelihoods and fuel options to the project so that trees that would be planted would not be tampered with.

It is estimated that about 6.6 million hectares of Ghana’s 8.2 hectares of forest trees, representing 80 per cent of the country’s land area, have been depleted over the years through human activities.

Currently, the country’s remaining forest cover of 1.6 million hectares is being threatened by illegal mining and lumbering and other human activities, worsening the climate change impact on the country evident on water bodies and the current rainfall pattern.

For instance, crop lands that were once fertile in northern Ghana are now unproductive, which has led to decreased incomes, while water sources are drying up due to prolonged droughts.

Such losses have forced most residents in the northern part of the country to migrate to the south to look for non-existent jobs.

To succeed in the country’s afforestation drive, it is, therefore, important for the government and various agencies to introduce alternative sources of livelihood and fuel to the people to curb the indiscriminate felling of the trees.