Good teachers: Our hope for a great tomorrow 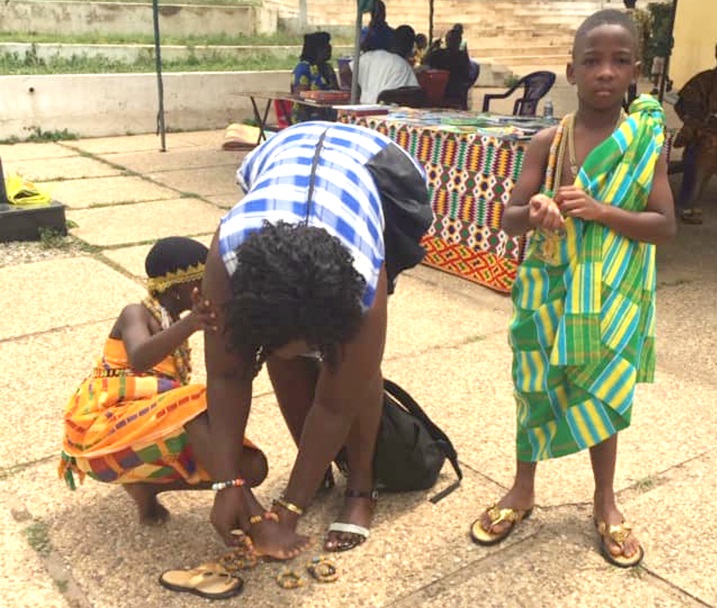 ­Esther Niamah dressing a pupil for a performance
30.5k Shares

The intensity of their discussion was noticeable. The care and love kneaded together into commitment and dedication was palpable.

Grace Nyarko, an eight-year-old class three pupil of the Gomoa Nkoranza Basic School, was seriously engaged or in a coaching “class” with her teacher, Samuel Forson.

He tried to calm her nerves. "You can do it," he muttered to her and repeated some lines to her.

Grace is competing in the Akan recital “Awensem” at the Central Regional Reading Festival in Cape Coast and that engagement was the last-minute guidance from her teacher.

The competition promised to be keen by all indications and Mr Forson was determined to get his pupil and contestant, Grace, the first spot.

Mr Forson said he would leave nothing to chance.

Mr Forson is a teacher at the Gomoa Nkoranza Basic School and in charge of getting pupils ready for the Reading Festival organised by the Ghana Education Service with support from USAID-Learning.

The festival and competition aimed at instilling reading habits and proficiency in pupils and helping them understand more about their culture and traditions through drama and poetry.

Mr Forson chose Grace to compete when among many pupils in her school she was able to learn a text given her in a day and recited it gracefully.

“Immediately I knew there was a lot of potential that needed to be tapped, so I took to coaching her,” he stated.

Grace was prepared to compete among the lower primary competition in her circuit.

She won the “Awensem,” the Akan poetry recital category.

She was then prepared for the district level at Gomoa West and she won and went ahead to win at the zonal level.

Now at the regional level, Mr Forson was still determined to ensure Grace would repeat her winning ways.

Many other teachers walked around the venue, the Aggrey Memorial Senior High School in Cape Coast, with their pupils who were also mostly contestants following them closely.

One teacher, Dorothy Mensah of Mensah Sarbah School in Cape Coast, looked distraught. Her pupil and contestant just developed temperature and she was taking her to the infirmary for first aid.

Another teacher, Esther Niamah of the Rev Wilson B Methodist Basic in Saltpond, hurriedly dressed her pupils for the contest.

The teachers seemed their all. They were their guide, coaches, nurses, stylists, cheerleaders; everything.

In the public basic schools across the country are these dedicated teachers who are working to bring the best out of the next generation of Ghanaians but they are usually not on the appreciation list.

The teachers in the country’s basic schools are not the usual subject of news articles except when they have overly caned a child or sexually abused a little one.

They are immediately trolled by all forms of media and likely dismissed.

The immense role teachers continue to play in the nooks and crannies of our motherland and in the development of children cannot be overemphasised.

Mr Forson said he was happy to be teaching in a small community where he believed he was certain to make the most impact.

“My goal is to get as many of the pupils to understand that with determination it is possible to attain whichever heights you seek. Many of our rural public schools don’t have the environment and facilities conducive for effective teaching and learning but many of us teachers are determined to push our pupils up. Sometimes the parents do not really appreciate the importance of education and it becomes our duty to guide the pupils on the educational ladder,” he noted.

He added: “We understand that our pupils are not less intelligent and believe when they are given the right motivation they can compete anywhere.”

Mr Forson said a platform such as the reading festival was important as it gave pupils exposure to build their confidence.

Speaker after speaker commended the teachers for their efforts in moulding the children and encouraged them to keep pressing on to get the best out of them.

Many teachers serve as important role models for the little ones in the communities.

They, like Mr Forson, Dorothy and Esther, work their hearts out with gladness to make great people out of the many young ones whose lives they are privileged to impact.

They deserve so much in rewards; so much, yet that is not so.

If teachers are rightly incentivised and motivated, the impact of their work on the development and wellbeing of the country and its people can be positively explosive.

The National President of the Ghana National Association of Teachers (GNAT), Reverend Isaac Owusu, in an interview said there were committed teachers who were not acknowledged.

"In very rural communities where you cannot find a clinic or police post, you will find a school with teachers there," he stated.

He said it was important for the National Teachers Council to re-introduce the teachers award at the district and regional levels to get many more teachers rewarded.

He commended teachers across the country for their hard work and gave an assurance that the GNAT would continue to work with the managers of education for better conditions for teachers.

Perhaps what sustains their momentum as teachers is the successes of the pupils they mentor.

Grace was one of such successes. She went into full flight during the contest and was adjudged first in her category.

She also performed a recital for the opening ceremony.

After everything, Mr Forson, with a huge smile and a warm modest sense of accomplishment, said: “It was not a wasted effort after all.”

If you were able to read this piece, thank a teacher.