Professor De-Ago, known in private life as Kweku Adom was a popular stage magician, who started performing in the mid-50s.

He worked with popular magicians like Professor Hindu and others at the time.

When he retired from magic performing arts, he stuck to cocoa farming and Bataan Asafo duties in the Gomoa Pinanko area of the Gomoa West District in the Central Region.

He was a Muslim and is survived by two wives and eight children.

Magic Performing Arts were popular entertainment forms in the Gold Coast in the early 50s and Ghana at independence from 1957 to late 70s onwards.

Its intent is to cause audience inquisition about how such "tricks” and illusions are brought about. Although they were full shows on their own, they sometimes served as opening shows to draw in audience at concert party performances.

According to Professor De-Ago's family, he went missing in his mid-teens for about eight weeks and returned in possession of those magical powers.

Subsequently, he traveled towns and villages across the Gold Coast and later Ghana to set up stage and perform.

Maame Adwoa Appiaah, a retired teacher who attended a number of Professor De-Ago's shows as a young girl in middle school at Gomoa Pinanko, recalls him conjuring money from the skies as he passed his hands behind the ears of random members of the audience during his performances.

Madam Addo adds that before his stage performances, town children will follow him on the streets responding to his call of "When I say Kwawu!", to which the children will respond "Kwawu store!". At this call and response chant, Professor De-Ago caused toffees to rain from the sky and children scrambled to pick them off the street in frenzy.

"I ate many of his magic toffees. I was even lucky to have grabbed some of the magic money as well on occasion, which I would spent at school with my friends. Those were exciting days. He was a phenomenal act, and it was fascinating to watch him perform.”

According to Maame Appiaah the magician was shot at on several occasions during his stage performances at the old market square in Gomoa Dawuranpong where he would disappear and appear from nowhere unscathed and alive. 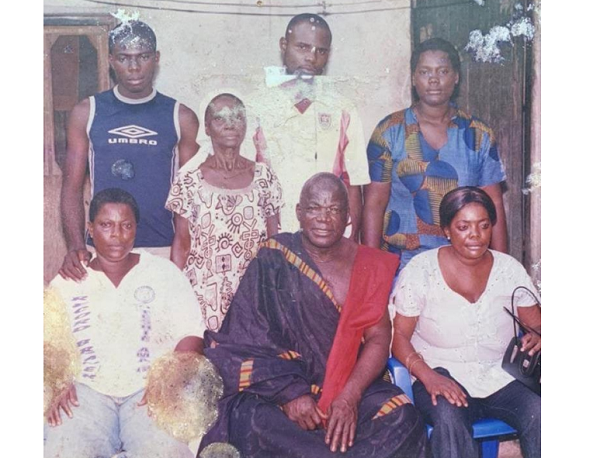 The late Professor De-Ago with some members of the family.

His signature act was cutting up his wife Nana Ama, taking out her intestines, setting them aside and putting them back into her. He will then pass his hand over her stomach to seal it. She would rise afterwards as if nothing had happened.

“It was scary watching him cut up his wife on stage, I could never fully watch it."

Ama Lekia, second wife and widow of Professor De-Ago narrates the incident of Professor Hindu's one time predicament as told to her by her husband.

Ama Lekia states, “My husband told me this intervention won him an award during Acheampong's regime. It was one of the highlights of his career."

In a career spanning over four decades, Professor De-Ago performed on many international stages in India, London, Jamaica and South Africa. His kind of magical acts was referred to as "black magic”, distinct from "traditional" magic art forms.

He retired from stage in the mid 90's and settled down to farm cocoa.

Today, magic art performance in Ghana is a thing of the past. It is dead with concert parties in the entertainment space.

Professor De-Ago may well be the last icon of the era of magic shows.