A commercial ripening of tomatoes in the sun prior to processing

Farming has become unattractive to many young graduates in Ghana, apparently because they do not think they will find pleasure and fulfilment when they engage in agribusiness.

It is refreshing to note, however, that there are still some young graduates who find farming a worthwhile enterprise and one of such individuals is Mr Sena Ahiabor, a graduate of crop science from the University of Ghana, who describes farming as his passion.

He says he had lofty dreams like any other graduate, but agriculture won his heart.

“I liked the way my father managed to look after us with the money he got from farming. That made me know that there is a lot of money in agribusiness,” he said.

“I was an “A” student and my father wanted me to study Medicine. I attended medical school for two weeks and decided to go back to my course of choice - Agriculture. My father and lecturers were very disappointed,” Sena recalled. 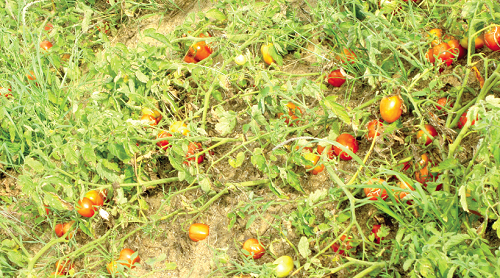 His motivation to study agriculture was to find a simple technology to process and add value to varieties of vegetable crops, especially tomatoes which is left to rot on the farm at his hometown.

“After desperately looking for a job in Accra, I failed to secure one so I decided to go back to my village, Anloga in the Keta Municipality, and help my father on his farm, and that was when I developed an interest in vegetable farming,” he said.

As fate would have it, fortune smiled at him when he got an opportunity to attend an exchange programme in Switzerland. There, he studied computerised greenhouse cropping, piggery, agricultural mechanisation, irrigation system management, plant composing, food processing, among others.

Sena hated to see a lot of tomatoes go waste every day along the street of Anloga during the glut season. He, therefore, refused an offer of employment extended to him after the programme in Switzerland and returned to his hometown to pursue his vision.

Luck again smiled on the young graduate when in 2005, he was given a loan of GH¢ 2,000 by his family to start his own agribusiness.

Tomatoes, carrots, cabbages, beetroots, okro, garden eggs, pepper and onion are some of the horticultural crops that Sena grows. Though on a small scale, his farm is the talk of his community in Anloga.

Tomatoes remain the major crop that he cultivates. It fetches him higher returns than any other crop.

Judging from his track record, Sena himself can be expected to develop some novel approaches to food preservation and processing in the future.He perfected cookers, gantry, incubation machines and pulper, a simplified technology for processing tomatoes into puree and canned them into bottles and jars. 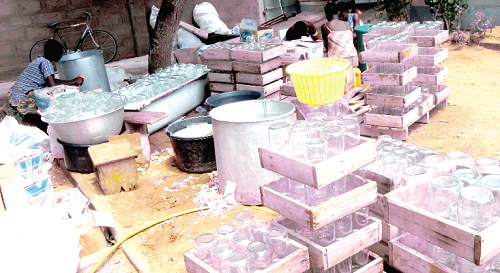 Some bottles being washed for  packaging

He is also pioneering new techniques aimed at improving packaging options for farm produce such as vegetables and horticultural produce to prolong their shelf life and also present a more hygienic produce to the consumers.

The young innovative farmer said there was no mystery in food preservation and processing, and that it’s just a matter of having suitable technologies in place and the people on hand who have the ability to implement them and train others.

According to him, he had finished a design for a mobile tomato processing plant, a relatively small plant which could easily follow the tomato harvest season from the south to the middle and northern Ghana to mop up excess tomatoes during the glut season to prevent rot.

Meanwhile, the farmer has changed his life from zero to hero. Sena says: “With the income from the sale of tomatoes, I opened a school to train local farmers and I am a permanent supplier of tomatoes to boarding schools in the region. I supply the whole market and have created jobs directly to 30 workers and indirectly to more than 4,000 farmers in the municipality.”

He has appealed to the government to set up a tomato sorting centre at various tomato growing areas in the country to cushion  farmers against loading boys and all other middlemen and women who take advantage of  farmers producing excess tomato to  offer low prices. 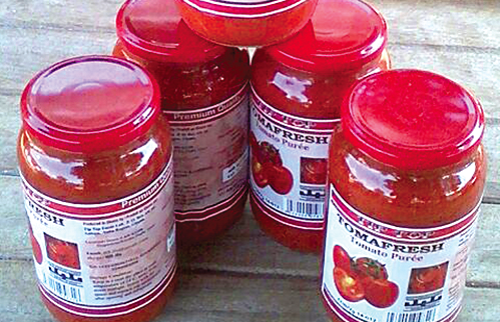 Some of the fresh tomatoes packaged in the jars

He said the absence of a tomato sorting centre had compounded the challenges for tomato farmers across the country.

Mr Wisdom Torgbenu Banini also grows tomatoes in Anloga. He says, “I can normally harvest between 600 and 1,000 kilogrammes of tomatoes per season, but I would lose nearly half of my production. Today, I rub my hands and smile all the time. Thanks to Mr Ahiabor’s technology, I can sell my tomatoes to the factory without waiting for market mummies from Accra to determine my price.”

Although more than enough fresh tomatoes are produced in Ghana, the Keta Municipality has the highest tomato cultivation rate in the country based on crop output per area.

Post-harvest losses of fruits and vegetables in the area range from 20 to 40 per cent, while losses from tomatoes alone range from 30 to 50 per cent.

Ghana’s internal market for fresh produce is immense but in many instances, the market cannot sustain the large inflow of the produce, leading to a market glut, panic selling, drastic drop in prices and product losses.