Why should gender matter in agriculture? 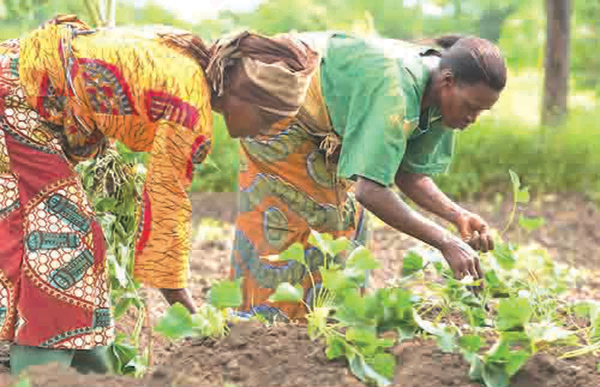 In the last few decades, agriculture has been recognised as the backbone of the economy for most African countries, representing about 15 per cent of the continent’s Gross Domestic Product (GDP).

Just as agriculture is the backbone for most African countries, so are women recognised in the sector as strategic contributors and players as they make up almost 50 per cent of the agricultural labour force in sub-Saharan Africa, an increase from about 45 per cent since 1980.

As farmers and farm workers, horticulturists, businesswomen, entrepreneurs and community leaders, they fulfil important roles in agriculture and the development of rural economies.

There is, however, a difference in the share of female labour in agriculture across the different sub-regions, with average percentages ranging from just over 40 per cent in Southern Africa to over 50 per cent in Eastern Africa.

The sub-regional data for Africa conceal wide differences between countries both in the share of female labour in agriculture and the trend.

Women contribute extensively to food processing and marketing, household nutrition, and natural resource management. They are also the predominant labour providers in agri-businesses and agro-industries (FAO, 2011a).

Despite this significant contribution, African female farmers are often excluded from conversations that determine agricultural policies, while discriminatory laws and practices deprive them of their land, their rights and their livelihoods. The inequalities surrounding women in agriculture also border on access to financing and agricultural resources. In some cases, the reward from their labour contribution remains a misfit.

Based on these facts and the desire to recognise and reward women’s effort in agriculture, the African Agricultural Technology Foundation (AATF) through its Cassava Mechanisation and Agro-processing Project, (CAMAP) has had tremendous success in helping reduce labour for women and youth involved in cassava production in Zambia, Nigeria and Uganda. The project supports women in cassava production by encouraging them to form support groups and building their skills through training on farming as a business, good agronomic practices and linking them to markets upon harvest.

In Uganda, some of the women who participated in the CAMAP Project were able to build an improved brick house for their families and buy goats for milk production to supplement their income. One of the women, a widow who wished not to be named, remarked that “I was afraid that I would not be able to feed my children upon the passing of my husband but this project has been a life-changer for me and my children. Through cassava production on my 10 acres of land, I have bought three goats that I will keep for milk production. I also intend to increase my land size for cassava production.”

To support youth inclusivity, CAMAP trained youths in the three countries in mechanised cassava production and involvement in agribusiness in alignment with their needs. The men were also involved in the project and incorporated as champions in support of women empowerment. AATF considers gender mainstreaming as being both about women and men while acknowledging their homogeneity.

The gender agenda remains essential in implementing agriculture interventions and contributes to the sustainability of food security in developing countries.

AATF has demonstrated that with careful planning and investment, women can be positioned to scale-up the continent’s food security agenda. It is, therefore, important for national governments and other developmental organisations to not only recognise women as valuable players in the agricultural sector but also as a block that can make a significant difference in the continent's quest to attain food and nutritional security.

It is estimated that 56 per cent of the African population will live in urban areas by 2050. If we are to meet this growing demand for food, we must harness the full potential of women (FAO 2018). It is imperative that gender remains a conversation about men and women.

AATF was founded in 2003 to address Africa’s food security prospects through agricultural technology, It was formed in response to the need for an effective mechanism that would facilitate and support negotiation for technology access and delivery and formation of appropriate partnerships to manage the development & deployment of innovative technologies for use by smallholder farmers in SSA.

Women being a very strategic block under the classification of smallholder farmers, the group responsible for the production of much of the food needed on the African continent should, therefore, be supported to have an unhindered access to affordable and sustain agricultural technologies that will scale-up their contributions.

The writer is AATF’s head of Gender Unit.