The earth belongs to them also 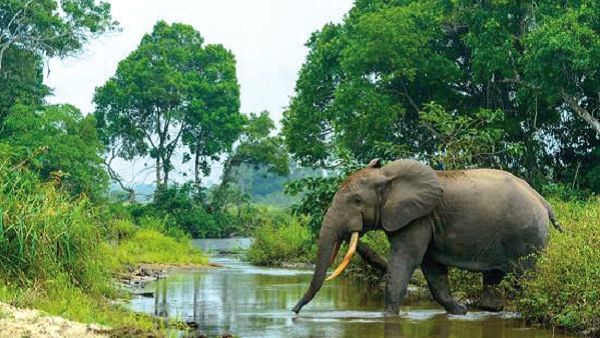 The journey from Accra to Ho, the Volta regional capital, is about 150 or so kilometres long. Once upon a time, it took me an hour and a half, driving my tomato red Austin Mini Cooper from my gate at North Labone in Accra to my parents’ home on Mawuli School campus in Ho.

These days, it regularly takes three hours in a much more powerful vehicle and on one occasion, it took four hours from the Airport Residential Area in Accra to the entrance to Chances Hotel which is at the outskirts of Ho on the road from Accra.

I am not writing about the state of the road or the traffic, or the thoroughly bad driving habits that you encounter, even though each of these subjects deserve full-scale treatment.

What is really on my mind today is something that strikes me forcibly every time I go on that road and which seems to exacerbate every day. On this 150-kilometre stretch of road now, it is not possible to find a five-kilometre stretch without human activity of some kind.

You are certain to drive past a village, a town, a factory, a school, a market, something that announces the presence of human beings. There does not seem to be any break between one settlement or structure and the next.

This is a phenomenon that is visible on all the roads in and out of Accra; the road from Accra to Winneba and beyond is now fully built up; Accra to Nsawam and beyond, through to Teacher Mante, Anyinam and onto Nkawkaw and further on seems to go on without any buffer, there is human activity everywhere.

Accra to Dodowa and beyond is the same, all built up; the Aburi hills used to guarantee a definite break, but now we are building on the hills and so, Accra to Aburi, through to Mamfe now feels like one town, it is hard to tell where Obosomase ends and Tutu starts and merges into the grand entrance to Mampong.

The road out of Accra heading out to Ada all the way to Sogakope towards Lome, the Togo’s capital, is the same, gradually filling up.

Sometimes I wonder why we still talk about the Accra plains as a place with potential for irrigation and large-scale farming.

There is no space now for even small-scale gardening.

On the road to Ho which is what has set me off, some of the developments along the road make no allowance for the possibility of the road being broadened in the future even though it is already obvious that we need a dual-carriageway road right now and not in the future, if we had the money.

I notice there is a Ghana-China Medical College that has sprung up at what, a few years ago, would have been called the middle of nowhere, but is now in a rapidly being built-up place along the road.

It is sited as close to the road as though it was in a residential area.

Every time I am on the road getting into or out of Accra, a number of questions come to my mind that I think we need to ask each other as a people.

Do we really want all of us to live in Accra and our capital city to spread around up to 100 kilometers on all sides?

I know that many Ghanaians take literally, the biblical injunction in Genesis 1:26-28, for human beings to multiply and dominate the earth, but do we really want to go on multiplying and occupying so much space and put so much pressure on the forests and land areas?

Do we accept that the plants, the animals, the fishes, the insects all have the same right to exist on this piece of earth as we humans?

Might we not be taking the biblical injunction to dominate the animals and the fishes to mean we should hunt them to extermination?

Many plants and animals have disappeared from Ghana because the human occupants have taken over the areas they used to occupy.

I do not advocate a Ghana that serves as the zoo for the rest of the world to come and see animals that have been hunted to extinction whilst we remain “underdeveloped”, but I fear we are losing the balance.

There is a failure of the planning regime and we seem to be thinking only about houses, offices, schools, factories and all the things that we humans believe we need.

We want to take out all the gold and other minerals and destroy the rivers and the forests.

The earth is the earth only when there is room for plants and animals and rivers and fishes as well.

The truth is that the monkeys that have been driven from their normal places of habitat onto the roads along the Shai hills have a right to the land, even if there are no title deeds handed over to them by their ancestors.

We will have to accept that even scorpions, snakes, vultures, and yes, mosquitoes have a right to the land we call Ghana.

There used to be space here in Ghana for lions and cheetahs and other such animals, today, some children in this country only see butterflies in television programmes.

Bird songs are no longer part of the background noise in this country, not even in the rural areas.

I am not quite sure why we still cling to the saying that when you hear the cock crows at dawn, it is us saying thank you; the chickens are all broilers and layers huddled in coops and they don’t crow.

I am not quite sure why we still refer to a herring season; we have abused the sea so much, the fisherfolk harvest plastic when they go to sea.

Maybe after the much fought over closed season this year, there might be a harvest that would convince the young people that indeed, there used to be bumper harvests.

The biblical verse I referred to earlier says that God blessed mankind and urged them to be fruitful and increase in number, fill the earth and subdue it.

Rule over the fish in the sea and the birds in the sky and over every living creature that moves on the ground.