‘Sanitation is more important than independence’, can we resurrect Salifu Amankwah? 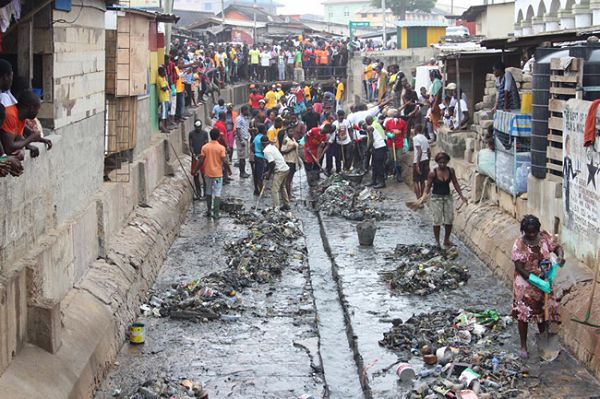 I saw a GTV news item in which a woman who was arrested for openly defecating behind the Cape Coast Castle some time last year, looked (and sounded) offended.

Balefully, her eyes swept over the policemen from the caps on their head to the soles of their boots and asked, genuinely surprised: “Ah, what is my offence? I am only ‘leaving’ my legs here” (an Mfantse idiomatic expression for defecation).

That woman is a representative of the one million Ghanaians who piss around anywhere.

She is the market woman, taxi or tro-tro driver, the kayayoo or street seller who satisfies their thirst with sachet water and drops the empty plastic in the street or the gutter.

She is not pretending to be ignorant; she is genuinely surprised that there is a law against the act.

Our love for freedom

The average Ghanaian loves freedom and we interpret it to mean the right to sin against the state and expect no rebuke.

Worse, the average Ghanaian’s freedom includes the right not to know that this or that act constitutes an offence.

Ghana is one land where ignorance is allowed its full bliss.

What a country! As a people we have lost our humanity; indeed, the behaviour of a great number of Ghanaians confirms that many of us have descended to the lowest depths of sub-humanness.

From the way we react to the law and to sanitation, a psychiatric doctor from another planet will conclude that the majority of us are mentally sub-normal.

But, if the above describes the mental state of the mass of the people, what language can we borrow to describe the haste with which our governments set up commissions or committees of enquiry into cases of mass deaths from accidents, and yet forget that many more are dying from sanitation-diseases and lawlessness?

For every 30-90 people who die in road accidents, stadium disasters or such other tragedies, hundreds more die daily because they ate food on which (unknown to us) a fly deposited microscopic bits of poison picked from a gutter choking with filth or rubbish heaped at the market, car park or public toilet.

One by one at different clinics, people drop dead from cholera or malaria every day, but the politician’s conscience is not pricked because “these are isolated cases - only one or two deaths”.

We forget that they are “one or two” from 500 hospitals and it occurs every day.

We should be declaring national tragedy every day!

In other jurisdictions, where human lives matter more than votes, one death from a motor accident or cholera will justify a national enquiry.

If committees or commissions of enquiry are important for national tragedies, I say that one death from filth should constitute a national tragedy deserving of a probe.

How often have we all, individually, not condemned the practice of heaping on the shoulders of our gutters garbage taken out during “National Sanitation Days”?

Yet, come next Sanitation Day, all of us, you and I included, would be repeating this national habit.

Mahatma Gandhi, whose saying on sanitation I have used as my headline, also said something very profound.

He observed that “A clean body cannot reside in an unclean city.”

For me, that is a revealing thought.

Why are our rulers able to live in our unclean cities?

Is it the case that they themselves cannot boast of clean bodies?

The nation, Ghana, is sick, but those whose responsibility it is to take us to hospital have been so busy these 60-plus years stealing national assets - grabbing bribes with both hands and both feet - that they fail to see the shivering body of our severely fevered nation.

As in many other Third World or African countries, Ghanaian governments do not seem to appreciate that a nation that successfully solves its sanitation problem can solve any other problem.

A dirty people cannot think, and we are too dirty.

A lawless people do not have a future, and we have one too many lawless elements in our society.

Before you condemn me for going overboard, kindly walk in front of any of our markets from where we buy foodstuff for the family meal.

You will not fail to notice that we have become sub-human!

In the course of my reflections on the state or our environment and our general state of lawlessness, the name of the late Warrant Officer Salifu Amankwah crossed my mind.

A retired soldier of the Airborne Force, this once dreaded head of the Kwame Nkrumah Circle Sanitation Task Force, gained notoriety for brutality in the era when Rawlings ruled.

Until he was installed there, with his monkey and his junta, the area around Kwame Nkrumah Circle could be summed up in one word we learned in elementary school - higgledy-piggledy.

The chaos at the time is equalled only by what is happening there, and the rest of the city, today.

Unfortunately he killed a man.

Having witnessed the failure of the law to deal with lawlessness and sanitation, is it not possible to resurrect Salifu Amankwah and set him up in a democratic environment?

The Sanitation Courts have proved ineffective in a Republic where law enforcement is our biggest challenge.

Can we have a bi-partisan think-tank to consider the above?