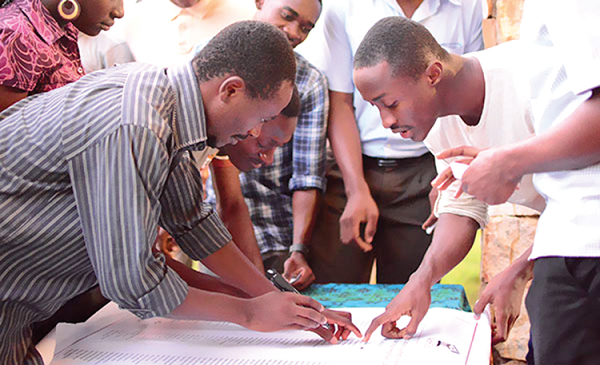 The ethics part of Ashesi’s mission has been taught extensively since the university’s inception in 2002, with leadership seminars being run as a core course for all students, among others, yet one-third of a class were caught cheating as of 2006.

They learned how to cheat in their junior high and senior high schools where parents and teachers encouraged them to do so for higher scores in BECE and WASSCE exams.

What then must be done to imbibe in them the need to do the right thing even when no one is watching? How can students’ mindset be oriented to have concern for others and the courage to dissuade others from exhibiting corrupt behaviours? Answers to these questions are sourced from an interview with Patrick Awuah, the president of Ashesi University, —continuation from last week’s publication.

ECK: What strategies did you use to mitigate the challenges? What does it take to educate students on anti-corruption behaviours?

PA: We had to do a few things together seriously. The first one was to be very clear about our code of ethics, to have them written in the students’ handbook, and in the staff and faculty handbooks, for everybody to acknowledge its importance, with mechanisms put in place to ensure enforcement.

Secondly, if you write codes of ethics and you don’t enforce them after a while, they become ink on paper that have no meaning. We, therefore, formed an Ashesi 5-member Judicial Committee (AJC) with the sole duty of adjudicating cases regarding the code of ethics. The AJC had a senior executive represented, the administrator represented, a faculty member, and two student representatives. Therefore, adjudication is being done by the whole university.

The third step we took was to go beyond rules and enforcements to philosophy. This was done by ensuring that the syllabuses of all courses engage students in conversations about ethics but in a Socratic way, so we do not preach at them or lecture them but rather have a conversation with them. They're reading texts and views from different parts of the world. The question about what is a good society what are ethics and integrity, and their importance, are conversations that humanity has grappled with for a very long time and so, getting students to grapple
with these same questions today is very relevant because you are engaging their minds and emotions about the importance of ethics.

The fourth and last thing we did, was to have a town hall meeting with the students where I told them that their alma mater stands for ethics and integrity, which cannot be achieved without them. The university’s mission is not for the president alone, if this really is my mission, then it will die. Because I have an expiration date.
Moreover, I am only one person among many people in this institution, so if the whole community does not take it as its mission, then it will fail. Going to the students and saying, “you need to make a decision, whether you want this or not, and trusting that after having these conversations with them, they would make the right decision was really important”.

However, it was a very big risk that I took, as a result, I braced myself for the possibility that they might say no, and if they said no, then it meant the mission had failed. Resultantly, they gladdened my heart when they unanimously said yes.

Resultantly, in 2008, Ashesi University students voluntarily signed an examinations honour code, pledging to write quizzes and exams without invigilators, upon their honour.

They decided to voluntarily sign a declaration at the end of each test or exam which stated: “I pledge on my honour that during this examination I have neither given nor received unauthorised assistance, nor have I seen any violations of the Examination Code of Conduct.”

This declaration is printed on the first page of Ashesi’s examination answer booklets. It was further agreed that if a student decided not to sign the declaration during an exam, but handed over the answer booklet, the course instructor should follow up on the student to investigate the credibility of the examination. Since then, all freshmen are made to engage in conversations during a five-week seminar in their first semester concerning ethics spiced with giving voice to values framework.

They are then given the opportunity to voluntarily vote to join the honour system in the first semester of their second year. Ashesi students have gone on further to extend the honour system to their social lives.