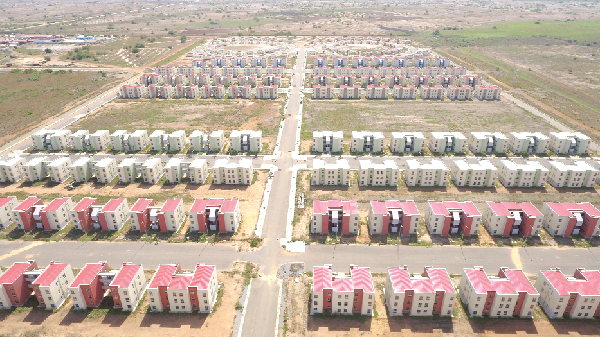 The Ministry of Works and Housing says the Saglemi flats are still empty because of suspicious contracts
30.5k Shares

In an ironic twist of facts, Ghana is currently experiencing a housing glut, but many citizens cannot afford decent housing.

Since 2010, Ghana has been tagged as experiencing a housing deficit of 1.7 million units, but industry players believe the deficit could be more as the country’s population has increased since then.

However, present trends show that the probable increase in deficit may not be because of an increase in population but due to the inability of citizens to afford houses.

Although the constant cry of the lack of housing has attracted many investors to the housing sector, the construction of several flats, apartments, estates, detached and semi-detached buildings has not been matched with an equal rate of occupancy, the Ghana Real Estate Developers Association (GREDA) has stated.

Affirming that there was a glut in housing, he said some people were buying housing properties because they saw them as worth investing in, but sales had slowed down because “you wouldn’t want to buy properties people don’t want to occupy due to their high cost.”

His assertion was echoed by some staff of the State Housing Company (SHC), who were exhibiting at a Sanitation, Water and Construction conference and fair held in Accra on, June 14, 2018.

They said although the SHC had projects in all the 10 regions in the country, the rate of occupancy was just about 60 per cent, meaning that not all of its flats, detached and semi-detached dwellings were being occupied.

Currently, the company’s two-bedroom Rowi flats are going for GH¢253,000, while three-bedroom apartments on the same flats cost GH¢310,000.

The SHC, which was established in 1956 to develop affordable housing units for Ghana’s population, currently has a total of 94 housing estates, with about 32,000 dwelling houses across the nation and being managed by the company through an operational structure which groups Ghana’s 10 regions into five zones – Greater Accra, Ashanti, Northern, Western and Eastern.

The Greater Accra and Western zones boast 27 estates each - the largest, followed by Eastern with 14 estates in Koforidua and Ho, while the Northern zone made up of Tamale, Bolgatanga and Wa, as well as Ashanti made up of Kumasi and Sunyani, have a total of 13 estates apiece.

The reason for the low to moderate rate of occupancy is the high rent and cost of most of the buildings put up by both the SHC and private estate developers, investigations by the Daily Graphic have unearthed.

While it does not require a trained eye to notice the springing up of new estates, flats and beautifully designed buildings in Accra and other major cities in the country, it is their prices that have scared prospective house owners.

Current prices of apartments, mostly quoted in dollars in view of the unstable exchange rate, are between $30,000 and $600,000 for a single bedroom apartment to a five-bedroom fully furnished house.

According to Mr Amegayibor, developers belonging to GREDA were putting up two-bedroom semi-detached houses occupying about 60 to 80 square metres that cost $30,000 (about GH¢150,000) as the lowest priced, but which brought out the question of how many people could afford it.

He, however, said “the reality on the ground is that that is the best the developers can do.”

He added that prices could go as high as $200,000 for the same house size for the upper market in prime areas, while a single bedroom house could cost $120,000.
They could cost about $85,000 in places on the outskirts of the city which are now being developed, he said.

The Managing Director of pioneering estate developer in Ghana, Regimanuel Grey Limited, Mr Ibrahim Bah, told the Daily Graphic that a two-bedroom semi-detached apartment with kitchen, garage, and veranda ranged from $65,000 and could go right up to $600,000.

There are also high end apartments selling for between $500,000 and $600,000 with high aesthetics and fully furnished with all home appliances at Sakumono (Community 13).

At one of its new developments, Balloon Gate Estate at Kwabenya in Accra, two-bedroom flats sell for US$90,000.

Building high end dwellings is not a misplaced priority, Mr Amegayibor surmises, but believes “it is a bit unfortunate or disturbing to note that while there is a huge demand for housing and the developers have also tried to put some houses on the market they are unable to sell. That tells you that there is a bit of mismatch as to what is required and what is supplied.”

He says the reason for the mismatch is the challenge faced by developers.

“It is the challenge that the developer is facing that makes it so because he is producing something and he is producing at a cost and the prospective home owner’s budget or affordability is a complete mismatch, meaning the developers are not able to match the kind of housing they are looking for and that is why there is this big disparity.”

He urged that “as a nation we have to look at the issues that are bringing this up and look for solutions to them; if not we will continue to suffer, especially affordable housing – we will only talk about it but on the ground it is almost difficult to achieve it.”

Mr Amegayibor said GREDA’s members, especially those putting up houses for the upper market, were complaining of the lack of patronage.

“There used to be good market for it some time back but today you see that a lot more development is ongoing; several houses are coming up in the prime areas and you realise that one small land that originally was occupied by one family has been demolished and converted into several floors of apartments. It means several units have been created there and so that has been on the market but sale is not going as it used to be.

“In the past a lot of people were keen to own them and they were not as expensive as now. Most people, mostly Ghanaians, bought them for investment purposes, not for them to live there themselves but to rent them out to expatriates and foreign business people who are in town. Now there are so many of them coming up and it looks like it is getting a bit saturated and so for several of the new ones that are coming up, the sales are not going as they used to go and if you look at the trend it is also as if it is almost the same buyers who are re-buying.

“Because they put them in investments, maybe they made so much from rentals and those who used mortgage to buy were able to pay back but now the trend is changing a bit. Most of the houses that people bought some time back, they claim they have not been rented for sometimes a year or so – they have bought those houses and they are still empty and so the investment option is also becoming difficult,” he added.

He said if the buyer used a loan facility to buy the apartment it meant he or she would be paying interest while the house or apartment remained empty.

The building of apartments, since the 1.7 million units deficit was declared in 2010, has contributed very little to reduce the shortage of housing in Ghana. According to Mr Amegayibor, a unit spans between one and three-bedroom apartments and the 1.7 million deficit from 2010 is just the average which was supposed to house a population of about 5.4 million if the survey conducted by the Ghana Statistical Service around the same year is factored in.

“When the 1.7 million was reached, it was also established that we needed around 130 to 140 units a year over the next 10 years to try and lower it.

“If we add on you realise that we should be hitting around two million housing deficit,” he stated.