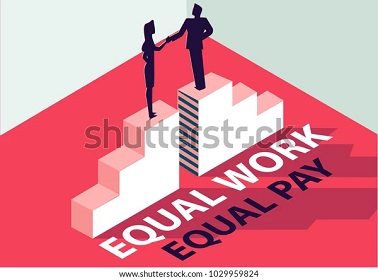 On September 18, this year, the world marked the United Nations International Day of Equal Pay Equal Work, which focuses on promoting equity in salaries for both men and women for work of equal value.

In developed countries, gender pay gap is considered a major issue. Gender pay gap is the pay disparity between men and women. For this reason, governments around the world are taking action to close the that gap to promote equity.

Such issues are lobbied on constantly by individuals and civil society groups; but gender pay disparity has not been topical or received that much attention.

Some labour consultants are of the view that pay disparity between men and women is not prevalent in Ghana, as the 1992 Constitution frowns on it.

The 1992 Constitution and the Labour Act, 2003 (Act 651) protect the right to fair remuneration and equal pay for work of equal value. Article 17 (1) of the Constitution states, that “all human beings are equal before the law and no person should be discriminated against on any grounds, including gender, race, colour, ethnic origin, religion, creed or social or economic status.”

The Labour Act strengthens this right, with the additional mention of persons persons living with disabilities.

A person who discriminates against any person, with respect to the employment or conditions of employment on the basis of gender, race, colour, ethnic origin, religion, creed, social or economic status, disability, politics or because that other person was a member or an officer of a trade union, will, therefore, be guilty of unfair labour practice.

Some also believe that the gender pay gap may not be an issue in Ghana because of the “well thought” out pay structure in the public sector.

The main focus, when it comes to gender inequality at work, has been calls for gender balance leadership. Inequalities can also be seen in the higher male labour force participation and the higher proportion of men in paid employment, while women dominate vulnerable employment.

The Chief Executive Officer (CEO) of the Fair Wages and Salaries Commission, Benjamin Arthur, believes that there is no pay inequality in the public sector of Ghana.

“When it comes to evaluating jobs as well, we do not make reference to gender. It is basically what you have been hired to do and the worth of your work and how you should be remunerated. These are the key areas we look out for,” he said.

“You will not hear a female teacher complaining about being paid less than her male counterpart,” he said.

Mr Arthur said Ghana had a good pay structure which prevented gender pay disparity, and that could be an example for other countries to learn from.

It may be that female workers in the private sector face such challenges, but have not voiced out their grievance for fear of losing their jobs.

A study conducted in 2020 by Alliance of Women In Media Africa (AWMA) and School of Information and Communications Studies, University of Ghana on the “Status of Women in the Ghanaian Media: Providing Evidence for Gender Equality and Advocacy Project” called for further studies to prove better the issue of equal pay for equal work.

The respondents for that study were divided on the issue of equal pay for equal work, as 42 per cent held the view that they earned similar to their male colleagues for doing the same work, while about the same number, 43 per cent, was unsure.

“The sizeable number of respondents who perceived that there might be gender pay gap is a reason for concern, although there is the need for further studies to prove more concrete evidence to illuminate these findings,” the report recommended.