Ghana Beyond the Supreme Court 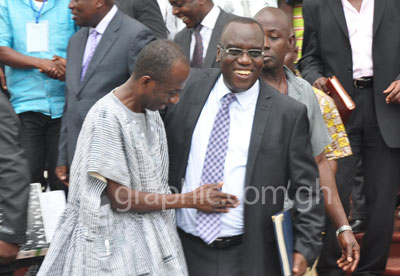 What will happen when the Supreme Court rules in the election dispute? Will there be peace or violence?
That we were a divided country before December 7th is clear to all—after all, this is the second election in a row that the winner has failed to win 51% of the votes. Unfortunately, the court case following the election has only worsened the divisions and tensions. Of course, it can be argued that if the petitioners had chosen the streets instead of the courts, our plight would be worse.

This case, regardless of the outcome, has already undermined quite a few reputations and national assumptions:

All these defects can be fixed, provided that we have peace and can work together.

I write today, not in pursuit of partisan advantage but to trigger a search for a path for our nation to move forward.

Now, if the Supreme Court rules that President Mahama lost the elections and should hand over, will NDC activists accept the ruling?

If the court rules that Nana Addo and the NPP in fact lost the election, will NPP activists accept it?

If the court decides that there should be a revote, will President Mahama continue in office until the revote occurs?

What if one side chooses to ask for a review as granted by the Mornah ruling? Can President Mahama stay as President during the appeal?

If the NPP prevails, what happens to the Ministers appointed by President Mahama in the light of the “no-prejudice” clause that governs our election disputes?

I make all these statements with the awareness that both the President and Hon. Nana Akufo-Addo have pledged to abide by the court’s decision. While we trust their words, we must verify that they can bind their followers to these pledges.  By the way, do the pledges to abide by the Supreme Court’s ruling apply to the first ruling or the final ruling?

Obviously, as a layperson, I concede that I may be misinformed. In that case, I ask for the forgiveness of Ghanaians.

Given these concerns, how can we proceed in the national interest?

First, we need President Mahama and Hon. Nana Akufo-Addo  to begin direct communication on how they can lead us peacefully forward. If they cannot or will not do this on their own, the Peace Council and or the former Presidents must step in to facilitate this. During their discussions they should discuss a series of mutually agreed steps that will calm tempers and encourage their supporters to be peaceful, regardless of the verdict. The first thing they should do is to mutually renounce their right of appeal as granted per the Mornah case. For the avoidance of doubt, this is not a suggestion for anyone to circumvent the legal process. It is a suggestion to help us survive the legal process. I am confident that since both of these gentlemen are patriots who wish the best for Ghana, they would do what is best for our country.

Second, we must commit to a reform in our court system, via constitutional or legislative means that will ensure that if such a dispute were to arise in the future, it would be settled before inauguration day, whatever it takes.

Third, we should commit to the streamlining of our legislative process so that our law-makers will do their work and spare us the embarrassment of constitutional instruments, like CI-74, prepared by our best and brightest being found to be unconstitutional in whole or in part.

Fourth, our party leaders must work with the Electoral Commission to ensure that the accountability systems in our election work on Election Day so that we can avoid expensive court cases in the future.

Next, we must lower the level of noise and increase the level of sense in our public discourse. Kwesi Pratt is right that the “Northern-Northern, Southern-Southern, Eastern-Eastern talk must be condemned in no uncertain terms.”  Unfortunately, too often, most of the media has been recklessly pouring petrol on the flames of our divisions. We are misusing our hard-won freedom of expression to undermine our national cohesion. Freedom of expression should not mean the right to insult our opponents recklessly.

Finally, we must accept that those of different political persuasions can be patriots—just like us.

May Allah keep us together.