Gender inequalities: A web of poverty for African women farmers 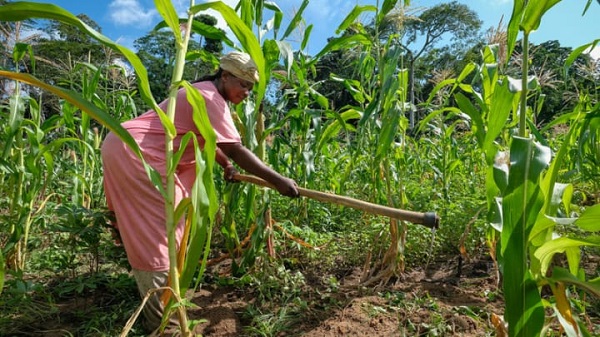 Addressing the pervasive inequality faced by women farmers across Africa, particularly in Ghana, is critical if the continent is to reduce poverty, create a balanced society, boost economic growth and feed its growing population.

African women farmers play a crucial role in the overall agricultural output of the continent. Two thirds of Africa’s citizens depend on farming for their livelihoods and more than 90 per cent of the poorest people, mostly African women, engage in agriculture.

What it means is that given equal access to productive resources, women farmers in Africa could increase farm yields by as much as 20 to 30 per cent.

However, due to the high incidence of inequalities in Africa, African women farmers are unable to make any meaningful gains from their farming work, leaving many of them in abject poverty.

For instance, a United Nations Research Institute for Social Development (UNRISD) 2022 report, titled; “Crises of Inequality Shifting Power For A New Eco-Social Contract,” published in October, which examines inequalities and how it is contributing to crisis in the world state that: “Inequality has been a driver, amplifier and consequence of multiple and overlapping crises—economic, social, political and ecological.”

The result of inequality the reports indicates “is a vicious cycle which is disrupting the basis for human life on this planet and eroding prospects for a dignified and peaceful life for all” and that the vulnerable and marginalised groups, including women who face multiple intersecting inequalities, are worst affected, falling further behind.

Even though agriculture has an enormous potential to drive inclusive economic growth, improve food security and create job opportunities for millions of Africans, particularly for women farmers, due to inequalities, many Ghanaian women farmers are unable to compete fairly with their male counterparts due to the many bottlenecks created by inequalities.

Women contribute largely to agriculture by providing labour for weeding, planting, harvesting and processing of agro products resulting in 70 per cent of food crop production in Ghana. In Ghana, for instance, women constitute about 52 per cent of the workforce in the agricultural sector.

However, due to the high rate of illiteracy among women farmers, largely caused by inequalities (socio-cultural), it limits their ability to access and adopt improved agricultural technologies.

According to the 2012 World Development Report (WDR), the World Bank (WB) estimated that if female farmers in Ghana had the same access to fertilisers and other agro inputs as their male counterparts, the overall maize yields would increase by almost one-sixth for the country.

Similarly, the Food and Agricultural Sector Development Policy (FASDEP) II categorically states that gender inequality in the agricultural sector has undermined the achievement of sustainable agricultural development because programmes and projects are not systematically formulated around different needs of women and men.

Deep-rooted gender gaps in African agriculture holds back women farmers from prospering. This is because women farmers lack access to land, agro inputs, capital, and credit facilities. What it means is that closing this gap can help boost household incomes and livelihoods, as well as provide cheap and nutritious food to Africa’s growing population.

For instance, a forward to the UNRISD 2022 report by its Director, Paul Ladd said: “Taken together, inequalities create a gravity toward multiple crises and shocks and make the effects worse. Each crisis plays out in an existing pattern of inequalities. This inevitably means that those who are already disadvantaged or excluded face the worst impacts, while those with more resources are able to shield themselves and recover more quickly. Many people are excluded and disenfranchised and feel that there is one set of rules for them and another for elites.”

The Deputy Director of Yebi Ma Africa, an NGO, Ms. Benedicta Gyimaah Folley, is of the view that if concerted efforts are not made purposely to tackle inequalities, it will go a long way to widen the poverty gap among African women, particularly those in rural communities.

“We ignore this gender gap at our peril and ultimately at a great social and economic cost,” she said, adding “It is a real injustice to Africa’s women farmers and their families that women make up nearly half of the labour force in agriculture but, on average, produce less per hectare than men”.

In an interview, Ms. Josephine Oppong-Yeboah, a Gender Advocate, said “If governments and partners invest in agriculture and, in particular, in its women farmers today, they can be assured of a legacy of greater equality and boundless opportunity that will benefit Africans for generations to come and may usher the beginning of the end of aid dependence for our people.”

For her, to narrow the gender gap, it is critical for African governments to address key policy areas which will help empower women farmers, including strengthening women’s land rights; improving women’s access to hired labour; enhancing women’s use of tools and equipment that reduce the amount of labour they need on the farm; providing community-based child care centres and encouraging women to use more higher quality fertilizer.

Additionally, she said, African governments need to promote women’s use of good quality seeds; tailoring training to suit women’s needs and using social networks to spread agricultural knowledge; promoting the cultivation of high-value and cash crops to women farmers; helping women access and participate in markets; as well as improving the education levels of women farmers.

According to Ms. Oppong-Yeboah, by spear-heading proven and effective policies that target the needs of female farmers such as strengthening land rights, governments can help farming families tackle the low-productivity traps that entrench poverty and prevent millions of farmers from leading decent lives.

That is why the UNRISD report: “Crises of Inequality Shifting Power For A New Eco-Social Contract” argues that “social (such as inequalities between groups along lines such as gender, race, ethnicity or caste, age, disability, citizenship and other characteristics) often intersect with poverty and a lack of economic resources, negatively impacting people, the economy and equity.”

As the popular adage goes, a stitch in time saves nine. It is time to address the pervasive gender inequalities in Africa in order to help alleviate poverty among African women farmers.