Galamsey: When a national asset becomes a curse 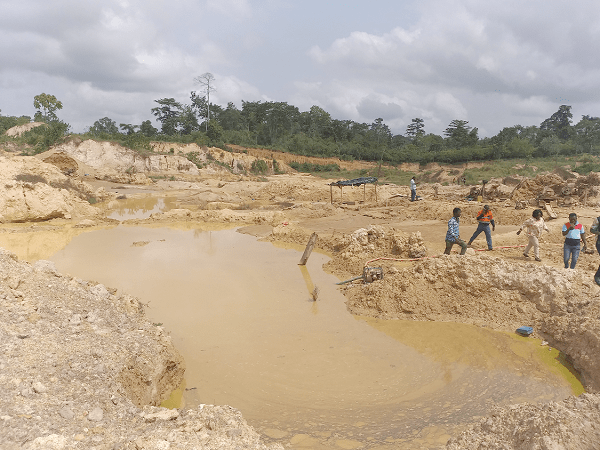 This picture was taken at Wassa Anankor on April 3, this year. Scores of illegal miners ran for cover upon seeing the Minister of Lands and Natural Resources, Mr Kwaku Asomah Cheremeh, and other officials who were on tour of mining communities in the Western and Western North regions Follow @Graphicgh

“We have a serious situation here. Our lands that provide us with food is being destroyed on a daily basis; we can no longer drink from the Tano and other water bodies that quenched our thirst; our cocoa farms are being destroyed.

“If you go to our towns and villages and see the extent of destruction illegal miners have caused to our land, cocoa farms and water, you will weep. It is even more worrying that our girls, as young as 15 years, have taken to prostitution because of these illegal mining activities. They put up tents for brothels to engage in this immoral activity and we can no longer control them.”

These were the lamentations of the Paramount Chief (Omanhene) of the Aowin Traditional Area in the Western Region, Beyeeman Tano Kwawu Benbuin III, during a recent visit by the Daily Graphic to the area.

The galamseyers, who operate mostly under the cover of darkness, have called the bluff of “Operation Vanguard,” the joint security team that was deployed to the area to fight the canker, and are destroying land and water resources with impunity.

The residents complained that several acres of cocoa farms had been destroyed by the illegal miners, while rivers such as Tano, Boin, Dusoe, had all turned milky-brown as a result of the indiscriminate mining activities.

It was clear from my interaction with the residents of the Aowin municipality and other communities in the Western and Central regions that galamsey is an albatross around their necks.

For instance, at Nkatieso in the Bibiani-Anwhiaso-Bekwai municipality, galamsey had dealt a heavy blow to education, as truancy has become common.

The head teacher of Nkatieso Basic School, Mr Anthony Mensah, bemoaned the extent to which academic work had taken a nosedive because of galamsey activities.

“It is sad that children, as young as six years, engage in illegal mining. Many of them spend their nights at galamsey sites and sleep in the classroom during the day when lessons are ongoing. I have raised this issue in many of our stakeholders' meetings but it appears we are only pouring water on rocks," he lamented. 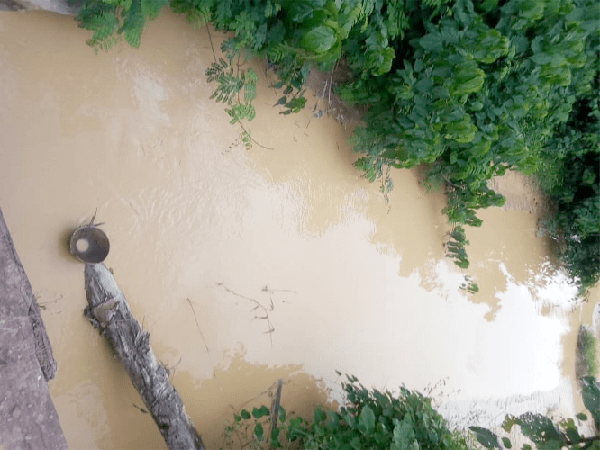 This is the current state of the River Ntoria which is the source of water for the residents of Nkwanta, Kwahu, Omanpe and parts of Boinso in the Aowin municiapality

It was also evident that galamsey had eroded the moral fibre of the youth as the females, in particular, confessed their involvement in prostitution. Helena, a 27-year-old mother of five at Nkatieso, confessed to having been involved with men in the galamsey business for more than a decade.

“At first, the gala boys gave us money, but now, they have affairs with us and only give us peanuts. However, I am fully involved to take care of my children," she said.

Although Helena is fully aware of the health implications of illegal mining, she has thrown caution to the wind and would rather suffer the consequences than “sit at home and starve.” Some parents narrated nerve-wracking stories about how they had buried their children and loved ones who went on galamsey expeditions.

One such parent is Yaa Kyerewa, who had not set eyes on her son for about a month at the time of my visit on October 22, this year.

“He completed Senior High School (SHS), but I have no money to support him to get tertiary education so he is deeply involved in galamsey. As I speak, I don't even know where he is. I am only praying that he returns home safely," she lamented.

Meanwhile, at Breman, Brofoyedru, Denkyira Obuasi, all in the Upper Denkyira West District, cocoa farmers are counting their losses, as the illegal miners have destroyed their cocoa farms.

Maame Afua Anto, a 52-year-old cocoa farmer, lamented how her cocoa was rotting away on the farm because of galamsey.

"The galamsey boys have dug pits in our cocoa farms, so some of our cocoa trees have fallen. Also, because of the onset of the rains, the road leading to our farms are flooded and we fear to even go to the farm because you could end up falling into a mining pit," she said.

Still in the woods

Since 2017, the crackdown on illegal mining has been on, including an almost two-year ban on all forms of small-scale mining and the deployment of Operation Vanguard to mining communities.

Hundreds of machinery have been confiscated from the illegal miners, while many of them have also been arrested and put before the courts.

On September 12, this year, the Minister of Lands and Natural Resources, Mr Kwaku Asomah-Cheremeh, described the fight against galamsey as 85 per cent successful. However, the reports about the resurgence of illegal mining in many parts of the country give the strongest indication that we are not out of the woods at all. 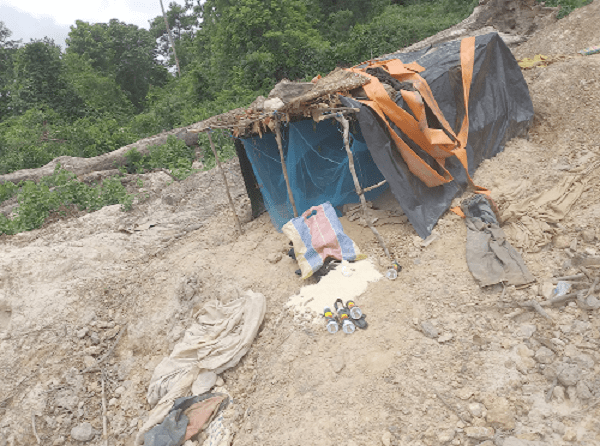 On Saturday, November 30, this year, the Municipal Chief Executive (MCE) for the Kwahu West Municipal Assembly in the Eastern Region, Mr Yaw Owusu Addo, made a distress call to the government to help save the area from the hands of illegal miners.

“The galamseyers have taken over our communities and we are all helpless. You can find more than 1,000 foreigners who have besieged our communities to mine illegally and there is very little we can do.

This time they have become more sophisticated because they have metal detectors that they use in detecting gold; send troops to dig it; leave the land degraded and go away,” he said.

Meanwhile, the leader of the Operation Vanguard team in the Eastern Region, Major John Majeed Balou, said although the team had managed to arrest 31 of the galamsey operators, they appeared handicapped because there were some insiders who were frustrating their efforts.

“Ours is a Herculean task because before we even move to the illegal mining sites, our own people call to tell the galamseyers that Operation Vanguard is coming so they take cover,” he revealed.

This revelation by Major Balou has solidified an earlier claim by the leader of the Aowin South Concern Youth Association, Mr Patrick Afful that there is a cartel behind the illegality.

Mr Afful had said: "I can tell you that chiefs, politicians, security officers and some collaborators take their percentage of the booty that galamsey operators get, so they do everything to shield them.”

Gold remains one of the greatest cash cows for Ghana, with the 2018 output hitting 4.8 million ounces from 4.3 million ounces in 2017. The country toppled South Africa to become the continent's top gold producer, as the latter’s output declined from 4.4 million ounces to 4.2 million ounces within the period.

It is estimated that artisanal and small-scale mining accounts for over 35 per cent of the total gold production and provides employment to over one million people.

The good book tells us that where one’s mouth is, there their hearts are too. There is, therefore, the need for all stakeholders to put the country’s interest above all other interests and help weed out the canker.

The souls of several of the country’s young men that have been swallowed by galamsey pits cry for redemption; the land and water are in dire need of their health; and innocent citizens want sustainable livelihoods.

If politicians really have the plight of the masses at heart; if traditional rulers are indeed the custodians of the land; if security agencies really exist to protect our lives; then, they must demonstrate it by shelving any parochial interest and help to deal decisively with this menace.