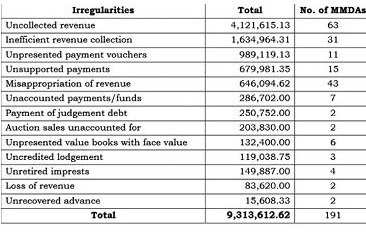 Once again, we are back to the same place we were a year ago, just as we have been year in and year out - agonizing over the findings captured in the Auditor-General’s report.

Casting my mind back to my secondary school days, when excerpts of the audit report were regularly shared in our newspapers, I am tempted to say, nothing much has changed except the magnitude of the infractions, which keep increasing over time. So why are we caught in this vicious cycle year in and year out?

Although written in a different context, the police patrol vs. fire alarm framework is useful for analyzing issues of accountability and oversight in any governance system. If you think of the analogy, police patrols are always on the watch – patrolling the roads, neighbourhoods, highways, watching out for any activities that infringe upon the law and keep people and communities safe. How does this analogy work in the context of the daily operations of our governance institutions?

There are rules that govern the financial and non-financial actions of public officials. For example, as part of the administrative process, there are individuals charged with ensuring that public funds are expended in conformity with the laid down rules in place such as receipts and other requisite supporting documents to justify payments.

Also, before a payment is finally approved, the request for payment goes through several individuals who, at each step of the way, are to ensure that all the procedures have been followed.

In our governance set-up, it is not uncommon to find units in charge of finance, monitoring and evaluation, audit etc. This is the idea of police patrols I speak of – units and people in our public sector agencies who are charged with constantly watching to make sure that the infractions captured in the Auditor General’s Report do not happen.

In fact, the passage of the comprehensive Public Financial Management Act 2016, Act 921, is an excellent example of a police patrol system. In reviewing the legislation, the scope it covers is really the kind of police patrol system you want in place to safeguard against financial infractions. But with the yearly revelations from the Auditor General, it is quite clear that the police patrols are failing.

Ineffective Response to Fire Alarms
In the article I referenced, the fire alarm is a de facto response to violations that occur in public administration. If you can picture a fire alarm for a minute, it normally goes off when smoke or a real fire is detected. Once this danger is detected, the real task at hand becomes putting out the smoke or fire and ensuring that the underlying causes are not repeated.

Such is the Auditor General’s report – it sounds an alarm because the police patrols (internal systems) failed in their duty to protect the public purse. The report sounds the warning and exposes the smoke and fire (infractions) occurring within our public sector institutions.

Perusing the Auditor General’s report and noticing the regularity with which certain infractions are repeated, the only conclusion one can justifiably reach is that the response, if any, to the sounds of the fire alarms raised is woefully failing to deal with the root causes of the financial malfeasance we see captured.

I prefer police patrols because when they are effective, it prevents a lot of damage to the system before it occurs. However, if we cannot count on the police patrols to work, then we must be able to count on a much stronger response to the fire alarms that are sounded in the Auditor General’s report.

The public hearings convened by the Public Accounts Committee in response to the audit recommendations are commendable; however, the most effective response, in my opinion, will be the Auditor-General exercising its powers to disallow and surcharge expenditures which are contrary to law more forcefully. This is because if there are no consequences for those who fail in their police patrol duties as well as those who continue to flout the rules, then, unfortunately, we will be back here again in a year’s time to lament over another Auditor General’s report full of infractions which I dare say may be worse than the previous years.

Dr. Johns Osae-Kwapong is a Democracy & Development Fellow at CDD-Ghana