Evangelists take over streets of Sunyani 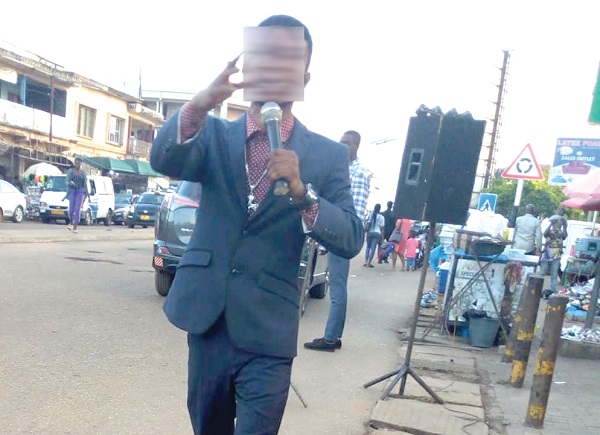 The number of street evangelists preaching on the principal streets and the Central Business District of Sunyani continues to increase daily.

Their continual activities on the principal streets of the town is gradually becoming a nuisance to the public.

The use of their powerful sound amplifier equipment on the streets is causing excessive noise to residents, the public and private entities operating closer to where they preach

The preachers, including females, are gradually taking over the principal streets where they ply their profession from everyday.

The Sunyani Victory Park, located at the heart of the town near COCOBOD’s magnificent building, is one of the popular places for the preachers.

Other popular locations are the OA Travel and Tour station, the DKM building, White House, the Semanhyia Printing Press area and in front of Ark FM, among others.

It is obvious that the preachers have designed or prepared a roster to preach at the various locations.

One batch of the preachers start their operation as early as 7a.m. and close at about 12noon to pave way for the afternoon batch.

At about 5p.m., another set of preachers storm the streets to preach until 8:30p.m. when they realise that commercial activities are over.

A document obtained from the Bono Regional Office of the Environmental Protection Agency (EPA) indicates that the 1992 Constitution of Ghana mandates Metropolitan Municipal and District Assemblies (MMDAs) to enact bye-laws to control different types of noise at public places.

According to the EPA, excessive noise beyond certain levels of intensity adversely affects human health.

It said any noise above 90 decibel (dB) may cause damage to the ear either temporarily or permanently.

It said noise contributed to ailments such as indigestion, ulcers, heartburn and gastrointestinal malfunctions in the body, while industrial noise exposed workers to high blood pressure and heart abnormalities.

It explained further that noise could affect the circulatory, digestive and nervous systems and even vision, adding that hearing might be damaged through exposure to very loud noise for a short period.

It said noise above 45 dB disturbed sleep and most people could not sleep above the noise level of 70 dB, adding that emotional upset, irritability and other tensions might also arise.

Despite these effects, the Sunyani Municipal Assembly has not demonstrated its commitment to regulate activities of street preachers or ban them.

That notwithstanding, the Sunyani Municipal Assembly Environmental Health Analyst, Daniel Korkor, says he had seized some gadgets from some of them, including some churches, after giving them several warnings to reduce their noise volumes.

Mr Korkor said he had officially written to the assembly to procure noise metre for the measurements of noise pollution in town.

He expressed the hope that after the procurement of the device, he would use it to regulate activities of these street preachers in town and other public places to ensure sanity.

Mr Korkor explained that the assembly’s Environmental and Sanitation Sub-Committee had also agreed to support the agenda to procure such a device to regulate such activities.

He said the plan of the assembly was to regulate activities of the street evangelists and not to ban them from preaching on the streets.

A 38-year-old food vender, Anita Kissiwaa, told the Daily Graphic that she sometimes found it very difficult to understand messages the street preachers try to put across.

She alleged that most of them were on the streets to solicit for money but added that “some of them do very well in their preaching”.

Ms Kissiwaa said the popular Bible verse for most of them was Luke 6:38. "Give and it will be given to you. A good measure, pressed down, shaken together and running over, will be poured into your lap. For with the measure you use, it will be measured to you.”

She said she had observed that the street preachers continued to use this bible verse to convince the public to offer them money.

A 34-year old resident, Rockson Duah also told the Daily Graphic that activities of the preachers were getting out of hand on the principal streets of the town.

"I'm a Christian, but activities of some of these preachers on the street are very worrisome", he stated.

Mr Duah said he was not against their preaching, but the loudness of their sound systems.

"Just last week, I asked one of them operating around my shop to reduce the volume of his system, but he refused.

"That day, I became his preaching topic. He was saying all sorts of things against me as if I'm the devil who hates the word of God", Mr Duah stated.

Another trader, Milicent Owusu, suggested that the public should desist from offering them money to discourage them from coming to the streets.

“I think the continual donations are motivating them to come to streets. They do not sound like preachers but rather beggars”.

"We are all Christians, we believe in giving offering, but the attitude of some of them put us off from offering gifts to them,” she stated.

Ms Owusu wished that they could preach without asking for money and allow people to offer them willingly.

At the Sunyani Victory Park, Prince Danquah, said traders around the park were fed up with the preachers and called on the Sunyani Municipal Assembly and the EPA to take action against those who make excessive noise.

“One thing I have realised about some of them is that they use just few minutes to preach and use several hours to solicit for money from passersby,” Mr Danquah said.