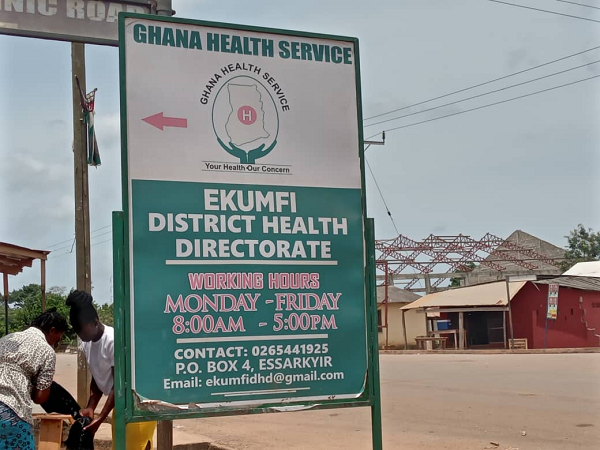 The World Health Organisation (WHO) in collaboration with the Ghana Health Service (GHS) launched the RST, S malaria vaccine, a complementary malaria control tool in Ghana in April 2019. Since its launch in Ghana, 47 districts were selected to pilot the implementation of the vaccine, and Ekumfi District of the Central region, is one of the 47 districts. Two years down the pilot implementation of the vaccine, Zadok Kwame Gyesi visits the district to assess the successes and challenges facing the exercise.

Malaria still remains a major public health problem in Ghana and Ekumfi District is no exception. Ghana is still part of the 15 high burdened malaria countries in the world, accounting for four per cent of the global cases and seven per cent of all malaria cases in West Africa.

The World Health Organisation estimates that in Ghana, about 20 percent of all children have malaria parasites in their blood.

Although there has been improvement in Ghana’s efforts toward bringing down malaria cases and related deaths, the disease still remains a major public health threat in the country.

As part of the global efforts in fighting malaria infections and related deaths, particularly among children under five years, the World Health Organisation (WHO) and its partners introduced the world’s first malaria vaccine known as RTS,S, targeting children from six months up to 2 years of age.

The vaccine, RTS,S, is a complementary malaria control tool – to be added to the core package of WHO-recommended measures for malaria prevention, including the routine use of insecticide-treated bed nets, indoor spraying with insecticides, and the timely use of malaria testing and treatment.

Since last April, about 275, 000 children have received their first dose of the malaria vaccine in Ghana, Kenya and Malawi through the pilot implementation programme. These are the three countries in Africa piloting the implementation of the vaccine.

The Ekumfi District is one of the 47 districts in Ghana selected for the pilot implementation of the vaccine. The district, which is one of the poorest in the country, was carved out of the erstwhile Mfantsiman Municipality as a result of its growing population which hampered its administration.

The Ekumfi district was created and inaugurated on June, 2012 with Essarkyir as its capital. It has a mission statement to facilitate the improvement of quality of the people within the assembly’s jurisdiction through equitable provision of services for the total development of the district within the context of good governance.

The district is regarded as one of the poorly resourced districts in the Central region, in terms of healthcare infrastructure, human resource as well as in the provision of healthcare services. But how is the district piloting the implementation of the malaria vaccine and how are the parents and caregivers cooperating with healthcare workers for the exercise?

Mr Martin Danko is the Director of the Ekumfi District Health Directorate. He notes that malaria still remains a major health challenge in the district’s OPD attendance.

In the case of adults, he noted, there were 9,033 confirmed malaria cases, representing 67 per cent of the total malaria cases in the district.

For the first quarter of 2021, Mr Danko said, the district has so far recorded a total of 855 confirmed malaria cases among under-five years children, while there had been 3,568 confirmed cases for the adults.

Touching on the RTS, S vaccine, he said although the directorate had engaged in extensive educational programmes to sensitise the populace, particularly mothers with babies who fell within the target group, the acceptance level still remained low.

He, however, said the district was one of the top-five performing districts in the region in terms of the implementation of the RTS, S malaria vaccination programme.

“With education, they have accepted it and we are making progress,” Mr Danko noted.

He noted, however, that although parents had been bringing their babies for the doses, many of them did not complete the full cycle of the vaccination programme.

In the same year, he said, a total of 739 children took the third dose and that no child was yet eligible for the fourth doses.

Mr Danko said it was worrying that many of the parents after bringing their children for the first, second and third doses, they did not come for the fourth dose to complete the full cycle of the vaccination process to give their children the needed protection against malaria.

“Vaccines are important,” he admonished parents and caregivers to ignore any ant-vaccine campaign against the RTS, S vaccine.

He attributed the non-compliance with the full four dose cycle in the district to the time difference between the third dose and the fourth dose.

For the first and second doses, Mr Danko explained, that because the duration between them was shot, many parents brought their children for it.

Emma Efua Idan is a nurse at Essuehyia Health Centre, the only major public health facility in the district. She said although people were initially skeptical about bringing their children for the vaccine because of some misinformation, many of the parents are now cooperating.

She said the Essuehyia Health Centre was always open to parents to bring their children for the vaccine, pointing out that “Many people are still not aware that there is malaria vaccine for babies. But we are doing our best.”

Emma said when parents come for antenatal care, they (nurses) educate them about the malaria vaccine as part of efforts to help clear wrong misconceptions about the exercise.