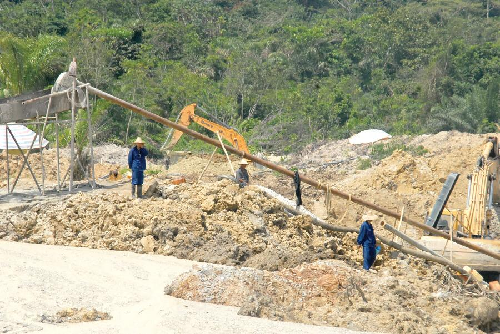 When the Media Coalition Against Galamsey began its anti-illegal mining advocacy in 2017, it succeeded to carry like-minded people along because they had the media on their side to push their agenda.

Their message engulfed the entire country like a fireball, involving all citizens against the activities of illegal miners which were thought to be detrimental to the land and water bodies.

The calls by the coalition for an end to the raping of the country’s lands and its resources was so loud that President Nana Addo Dankwa Akufo-Addo, newly sworn in then, put his presidency on the line to support the cause.

From 2017 till date, illegal mining or galamsey continues to be an albatross around our necks.

After years of painstaking efforts to end the menace, galamsey and its practices are still with us because the actors who began the advocacy failed to identify the red flags.

Among these are the unending subject of weak land tenure system due to the weak structures at the grassroots which has given room to chiefs, youth, opinion leaders and many community members arrogating to themselves powers to move onto any land and start digging for gold or giving any portion of land out for galamsey activities without recourse to law and accountability.

Again, competition for wealth, particularly among the youth, due to poverty, greed, exploitation, the hunger to get-rich-quick and the availability of markets for gold, have kept illegal mining for gold booming.

Illegal activities continue to attract more hands because many of the mining laws are outdated and not properly coordinated among the respective institutions charged with the responsibilities to regulate the sector.

Enforcement has also been weak over the years.

The trade got out of hand when the Chinese and other nationals with the connivance of indigenes invaded the mining communities with their capital-intensive machinery (changfang/excavators) and funds.

They managed to recruit our kinsmen and in some cases, greased the palms of traditional and opinion leaders, widening the scope of the galamsey from illegal small-scale mining to illegal capital intensive surface mining.

Instead of the country reaping largely from mining, the current ‘desecration’ of lands through galamsey without recourse to the laws and the environment has led to the destruction of farmlands.

Galamsey activities have led to the loss of habitats for animals. Soil in mining communities is polluted with chemicals from nearby water bodies used in processing minerals mined.

The country’s forests have been depleted, leading to deforestation, loss of vegetative cover and the extinction of exotic plants and animal species.

It is significant to point out that to nib the practice in the bud was to identify the factors driving people into the illegal activity and so the coalition and for that matter,the government should identify and lay bare the wrongs which characterised the old system of mining (galamsey) but which were not addressed until galamsey permeated the fabric of mining and these include the problem of land tenure, poor coordination among law enforcers and the laws and weak mining laws and their enforcement.

The land sector must be urgently reformed by reconsidering the nagging subject of land ownership and possibly ensuring that lands used for galamsey are vested in the President.

There is the need for effective collaboration among all stakeholders beginning with the Ministry of Environment, Science, Technology and Innovation, the Minerals Commission, Small Scale Miners, the Forestry Commission, the Water Resources Commission, community members, chiefs, opinion leaders and the Ministry of Local Government and Rural Development.

One believes that the fight must continue (aluta continua) and so if all goes well with the additional political will, galamsey must end at all cost. With that, the environment can be resuscitated and the water bodies cleaned. There must be a conscious effort to revive and save the forests by nursing and encouraging the planting of more trees as well.

The government must institute measures to ensure food and water security while it takes measures to sustain the use of the country’s resources. There is the need to intensify education at the local level on illegal mining and its consequences. They must also work to improve security within mining communities and introduce very realistic social interventions aimed at reducing the cost of living at the community level.

Finally, Ghana must work towards becoming a green country by encouraging activities which would protect and enhance its environment.