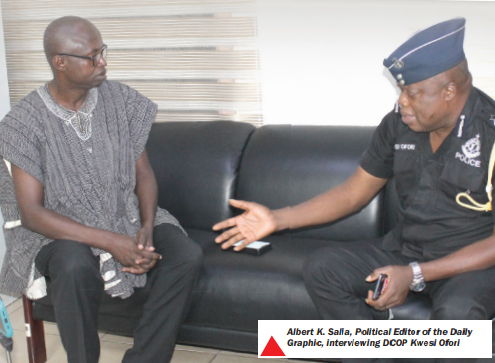 After 35 years of service to the state, the Director-General in-charge of Public Affairs of the Ghana Police Service, Deputy Commissioner of Police (DCOP), Mr Kwesi Ofori (KO), will officially retire on July 20, 2022.

He came through the offices of the Daily Graphic to show appreciation for all the support the newspaper and company gave him throughout his period of service. Our Political Editor, Albert K. Salia (AKS), caught up with him to discuss a few issues, especially the management of demonstrations in the country. We bring you excerpts of the interview.

KS: DCOP Kwasi Ofori, you are welcome to the Daily Graphic. We are happy to interact with you as part of our Big Interview session. Immediately, we want to find out the police engagement and your personal experiences during the recent two days demonstration by the Arise Ghana group.

KO: Thank you very much. Managing demonstration and public order issues are very dear to the Ghana Police Service. At all times, the police stick to the dictates of the public order law and by that we make sure that the demonstrators submit a letter, define the routes that they will use, estimated number of people involved, and those at the helm of affairs in terms of leadership.

AKS: What does the Public Order state?
KO: The public order law states, among other things, that leaders of a demonstration have a responsibility to ensure that things go on well. So when a letter is submitted and discussions are held between the police and the would be demonstrators, some kind of agreement is reached for orderly behaviour and the police, knowing the route, deploy along those routes for an incident free event. When you look at it critically, demonstrators go through communities and as far as we are concerned, apart from protecting the demonstrators, we also try as much as possible to protect the communities that they go through.

AKS: Was it the case with the Arise Ghana demonstration?
KO: Narrowing it to that demonstration, a lot of discussions were made regarding the safety of the demonstrators and the communities they would pass through and also make sure that they kept to the dictates of the public order law. You might have noticed that the IGP, during his address to over 2000 personnel that had gathered at the Police Training School, charged the policemen to ensure that they upheld the tenets of human rights, make sure that they went by the public order law, and make sure not to do anything that would mar the safety of the people during the demonstration. And he also reminded us of the democratic path that we were charting. So the policemen were properly briefed and the command and control was also at work.

AKS: If I may just come in quickly, the agreed time, did the police agree to the 8 to 3pm.
DCOP: You might have noticed, it was not the police that scheduled it. When they decided to conduct part of the demonstration into the night, police appealed to them not to do that, but when they failed, the police moved to the court. And the ruling of the High Court, among other things, stated that they should avoid demonstrating at the seat of government; that they should stick to the traditional route. The court further stated that it should not go beyond 4pm. When you look at that very day, the activities were highly structured by the orders of the court.

AKS: But you could see they breached the timing.
DCOP: That was very clear. AKS: So do you learn any lessons from what happened?
DCOP: We believe that from now on, we should all be interested in the security aspect of demonstrations. Leaders of demonstrations need to go further to exercise control over their followers and the police would at all times increase its security eyes to make sure that people conform to the dictates of the public order law. For those who fail to do that, the powers given to us by law would be exercised to make sure that we do not exceed what is expected.

AKS: So how would you describe what happened, especially on the first day?
KO: The first day was not a good story for us as a people and as a nation. It was bad. Ghana is our only country and whatever we do, we should look at the security of our dear state first.

AKS: Do you intend to pursue the case of those arrested or it is going to be another event like arresting somebody, only to release the person the next day and abandoning the case.

KO: The police have charted the course through to the law. So definitely we would want to see justice take place.
AKS: So what piece of advice would you give to would-be organisers of future demonstrations.
KO: Would-be organisers should exercise full control over their subjects and make sure their followers are briefed to live up to expectation in accordance with the tenets of the public order law. And for them not to do anything that may mar the security of our dear country. So we should all be committed to the security of the state, do things that would promote togetherness and a stronger nation as a people.

AKS: What is the commitment of the police to ensure peaceful and successful demonstrations?
KO: Our commitment is to make sure that we deal with all manner of persons with respect and not to do anything in terms of being biased. We are aware of the environment we operate in as a democratic country, where we have pluralistic views on issues.

AKS: Do you have Formed Police Units in all regions and districts or it’s only in Accra.
DCOP: They are being replicated. The National Headquarters is in Accra, and one is in Kumasi. The commanders of the Service, especially the regional commanders, have taken the posture of making sure that we create a certain measure of decency as far as our operations are concerned.
AKS: For how long have you been in the Ghana Police Service?
DCOP: This year would be 35 years since I joined the service.

AKS: What would you describe as the ups and downs within these 35 years of service?

KO: The 35 years have been so interesting. As a young boy who joined the police service, I went through a lot, upgrading myself educationally and professionally, moved through the ranks steadily from Constable up to Deputy Commissioner of Police and on the 20th, my career will come to an end. For the ups and downs, there had been some disappointing times, and very interesting times as well and moving from one place to another during the service has its own challenges, looking at the children, their schooling, your wife changing from one town to another, seeking transfers for her as a worker and yourself trying to adjust into a new community and working successfully posed a challenge. Sometimes you might have been engaged in some personal projects for the family and transfer might change it. That is what is expected of us because with the police, our duty is a national one so you can be transferred to any place to serve our dear country. Our commitment has also been solid. Another aspect is also understanding the cultural practices in the various communities, towns and areas and I think that is very interesting and opens one up to be very accommodating and also to accept that cultural diversity is a reality in our contemporary times and add all the pieces, take the positive ones and move on.

AKS: After 35 years of service in the Police Service, that’s a long time but the major challenge coming up is that the young men and women of today being recruited into the service are more money conscious or materialistic in nature. Do you agree to that?

KO: Well, the entire world is talking about wealth creation and so on but we should look at the ethical aspect of it. Money cannot be acquired anyhow, one needs to work for it genuinely, taking into consideration the law and ethics of society and I believe even now in some circles where wealth is not to be preached or talked about, people are talking about it so the youth are at a crossroads. I believe the police have put institutional mechanisms in place to make sure that the police first behave ethically according to our standards but those who fall short of the standards are also dealt with according to our set of rules and regulations.

AKS: So what piece of advice would you give to the police personnel of today.
KO: For the police personnel, we are doing everything we can to make sure that they are fit to serve and not to lord over the people, not to do anything that may soil the decency of people in our society. The police should rather serve and commit themselves to work hard to make our country great in terms of promoting peace and security for all.

AKS: Do you think the six months training is enough for you to imbibe all these virtues in them

KO: The service we have is so methodical, the six months is just to make you a policeman. But in-service training take a lot of time both local and international. So a lot of resources are packed into post depot training and this training is very important to make one successful, where we do a lot of courses in terms of police order, enforcement, patrols, intelligence and a whole lot more. Public engagement of late is also becoming a key part of it to make sure that people are able to communicate well too in their communities and be able to execute problem-solving approach to issues going on in the community.