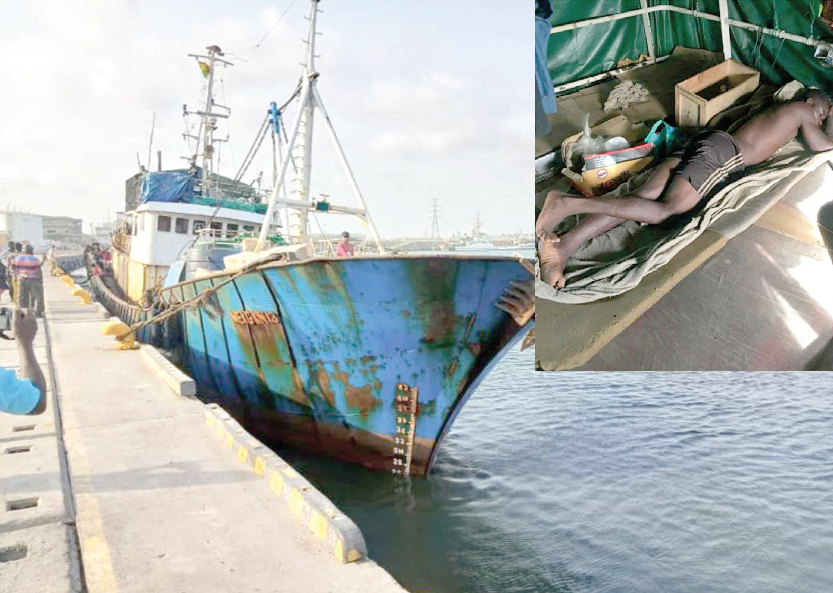 A vessel with a worn-out look in dock at the Fishing Harbour. Inset: A local crew member resting on the deck of the vessel
30.5k Shares

Kweku Simon, 30, was resident in Anomabo in the Central Region when he left his town to Tema in 2014 in search of greener pastures.

He met a friend, a native of his village, and  requested to stay with him temporarily at his ‘ghetto’-like home at Tema Manhean, a community close to the Tema Fishing Harbour.

Although with no skills in seafaring, Kweku had some experience working with canoe fishermen at Anomabo, and so jumped at the opportunity to work as a deckhand to undertake cleaning, mooring (fasterning the vessel to a mooring facility) and cargo handling in a Ghanaian flagged fishing trawler, Long Xiang 602, when he heard that they were recruiting.

He was further motivated by the GH¢2,200 remuneration he could earn on a single trip, which could be for 30 to 60 days at sea.

He was, thus, overjoyed when he was given with the amount on his first trip, which saw him and his colleagues successfully harvesting fish from the sea, packaging and transporting it frozen into specialised canoes at sea for export to unknown destinations.

He was soon to have a rude awakening about the dangers that came with working on the commercial trawlers.

He and his colleagues realised that subsequent trips were no longer as lucrative as initially envisaged, with wages between GH¢500 and GH¢850 for trips which took between 30 to 45, or sometimes 60 days at sea; often travelling as far as 584 nautical miles, with the realisation of bumper harvests from such expeditions.

Whenever they had to embark on an expedition, Kweku and his colleagues carried sachets of water, biscuits, gari and sugar to last them the period.

With first aid usually being absent, they also equipped themselves with pain relieving medications,  rubs/ointments, bandages to tie wounds in the event of injuries, as well as oral rehydration salts (ORS).

“Food supply on the trip is usually of poor quality, so the gari we take along comes in handy to enable us to work to achieve our individual tonnage goals, which also comes with some minimal amount of fish as a bonus package,” Kweku and his colleagues told the Daily Graphic at the Tema Fishing Harbour.

There were no professionally trained health personnel to attend to any health-related emergencies while at sea.

On the commercial trawlers, they claimed, there existed two separate worlds, with the expatriate crew —  the captain, chief engineer and other senior crew members  —  enjoying all and every privilege associated with the job, while the world of the local crew, who were mostly recruited by the “boatswain” from the streets of Tema Newtown and its environs was often ‘pathetic’ and ‘oppressive’.

The situation was said to have repeatedly led to several conflicts between the locals and the expatriate crew, who were highly remunerated, leaving the locals with no bargaining competitive edge, thereby creating disparity, unfair rights and privileges accompanied with terrible living conditions they had to endure

While these vessels are registered to fly the Ghana flag, Ghanaian interests in their management while at sea or with the sale of fish was often limited, as the expatriates had the upper controlling interests, as well as the expertise in the pricing of the catch.

Additionally, deckhands usually have no written employment contracts to guarantee a fixed wage, owing to the ‘word of mouth’ engagement procedures used in engaging most of them who, fearing hunger still went back on such boats despite their experiences and sometimes the allegations recounted by others.

The allegation was confirmed by the Marine Police Unit at the Tema Port.

Allegations of corrupt practices and other illegalities were also said to often go unreported, although fisheries observers were always on the expedition with the crew.

While the observers are mandated to collate data on the vessel’s activity, including infractions, such as illegal fishing and incidents of abuse for submission to the Fisheries Commission, “they are bribed into silence by the expatriate managers, who mostly pay their remunerations which are often inadequate,” a sailor preferred to be called  Adjetey alleged, adding that the observers were also paid long after the observation missions had ended.

Most of the vessels were rusty, because of the lack of maintenance, and living conditions, according to the crew interviewed, were also extremely filthy.

There were not enough cabins or bunks for the crew to sleep, so the senior crew made the deckhands sleep on the deck, which often had inadequate protective beams. They also seldom had a bath during fishing expedition.

On days when the fish caught exceeded a vessel’s tonnage, deckhands claimed they were compelled to stand in the vessel throughout its return journey to port.

According to Kweku and his colleagues, the local crew performing all the duties on the vessel were provided with two medium bottles of water for 24 hours.

“Meanwhile the nature of the job involves the hauling of nets at three hour intervals; sorting out the harvested fish, usually of various varieties such as, salmon, red snapper, cassava fish, octopus, shrimps and sardinella (sardine) into the refrigerator on the vessel to freeze them; packaging them into cartons and arranging these cartons in the vessel,” they claimed.

The insanitary conditions are the washrooms on the vessels resulted in the crew attending to the call of nature  in the open sea.

One such situation led to the death of Derrick Attoh in January 2019, when he fell off the edge of the vessel, while attending  to the call of nature.

Derrick, according to police sources, had his two legs chopped off by the propeller of the vessel, leading to his death.

“In one instance, we picked up a decomposing body from the vessel straight to the cemetery for burial after the deceased was reported to have died from cholera aboard the vessel,” a police source said, corroborating the story of Kweku and his friends.

These local crew members have no form of medical certification, which is mandatory in food handling and processing, owing to the crude recruitment processes.

Accidents have somehow become a common occurrence with casualties being recorded among some crew members giving an indication of some level of laxity in inspection and monitoring by the relevant agencies such as, the Ghana Maritime Authority (GMA), Port Health, Fisheries Commission and the Fisheries Enforcement Unit (FEU).

Most of the accidents occurred on the deck, which serves as a working area and temporary sleeping area for the crew.

Statistics at the Marine Police Unit at the Tema Port, for example, indicated that six separate accidents involving two industrial trawlers, one semi-industrial trawler and a tuna vessel occurred at sea in 2019, with four deaths and two persons missing.

Similarly, five of such accidents involving two tuna vessels, one semi-industrial trawler, and two fishing boats were also recorded from January to October 2020 in which three people died, seven were injured and three got missing.

In October 2020 alone five injuries from a single accident were recorded, two crew members lost their lives and another two went missing.

The Director of Port Health at the Tema Port, Dr Raphael John Marfo, responding to some of the issues, indicated that whereas the health regulations required that persons handling food must be screened for typhoid, hepatitis and tuberculosis, they were constrained by way of the unavailability of departure facilities at the port to allow for a prior inspection of health certificates before the crew departed for expedition.

“We only see the crew members when they arrive in port since the vessels will require a free (practique) certification before being allowed into port,” Mr Marfo said.

The acting Director in charge of Maritime Services at the GMA, Nana Kwabena Boakye-Boampong, for his part, blamed the authority’s inability to enforce strict rules for such vessels on the absence of a comprehensive regime for the fishing industry.

The GMA, however, had initiated the processes of ratifying the Cape Town agreement for the safety of fishing vessels and subsequent incorporation into the laws governing their operations.

The Director of the Fisheries Commission, Mr Michael Arthur, who had initially confirmed receiving petitions from some organisations relating to the human right abuses local crew suffer at the hands of expatriate crew, was unavailable for comments on the matter.