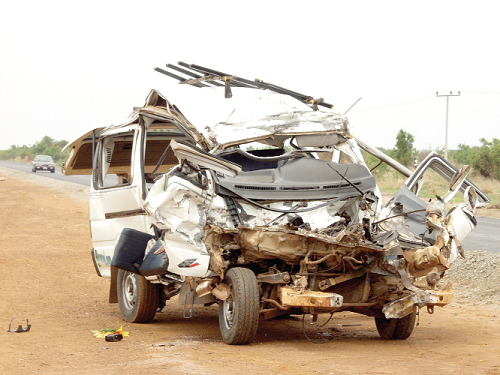 An accident on Sege Road.

Statistics on road crashes from the National Road Safety Authority (NRSA) show that 2,589 persons were killed in 14,886 reported cases of road accidents in 2020.

A close look at the statistics shows that 10,112 private vehicles were involved in the crashes, accounting for 40.2 per cent of the total reported cases.

For commercial vehicles, 9,356 were involved in crashes in 2020, representing 37.2 per cent of the total vehicular accidents.

An accident on the motorway.

The carnage on our roads is getting even more worrying as latest figures from the police Motor Traffic and Transport Department (MTTD) show that 771 people died from road accidents in the country from January to March, this year (2021).

The figures show that 636 of the victims were male and 135 were female.

With the above statistics, it is crystal clear that carnage on our roads remains a hard nut to crack.

The fact that indicators such as the number of fatalities, injuries, vehicles involved in crashes all increased in 2020 means that more needs to be done to restore sanity to our roads and guarantee the safety of road users.

It is even more worrying that motorcycles have gained more grounds in the classification of vehicles involved in crashes over the last two years, moving from 20.4 per cent in 2019 to 22.6 per cent in 2020.

Section 128 (1), (2) and (3) of LI 2180 prohibits the use of a motorcycle or tricycle for commercial purposes, stating: "The licensing authority shall not register a motorcycle to carry a fare-paying passenger."

These staggering figures make it imperative for a bold decision to be taken on the use of motorbikes for commercial purpose.

As it is now, we will be playing the ostrich if we keep lamenting about the numerous accidents that result from motorbikes; knowing that the political will and regulatory potency to enforce Section 128(1-4) is virtually non-existent.

If taking urgent steps to amend LI 2180 to allow the use of motorbikes for commercial purpose will help tame this monster on our roads, so be it.

Pile-up on the N1 Highway

As the proponent of this latter school of thought contends, regularising commercial use of motorbikes will ensure that riders are properly trained and licensed to ply their trade in dignity.

Regularising ‘okada’, as the commercial usage of motorbikes are commonly known, will ensure that the motorbikes and their owners  are properly identified and tracked.

This way, the abuse of traffic regulations will improve, while crimes associated with commercial use of motorbikes will go down.

Additionally, the free-range economy in which okada riders operate will be streamlined to rake in the needed revenue for the government.

It is refreshing that the National Road Safety Authority (NRSA) and the Driver and Vehicle Licensing Authority (DVLA) have started processes to train motorcycle riders on road safety.

According to the Director-General of NRSA, Mrs May Obiri-Yeboah, a training module had been developed for the training to begin sometime this year.

This is a bold move to arrest the dragon on our roads.

While this is being carried through, a national dialogue involving key stakeholders must begin on how best to handle the okada menace.

The bare truth is that okada has become a viable source of livelihood for many unemployed youth across the country and it is difficult, if not impossible, to discard it from the country's transportation architecture.

However, if the non-compliance to traffic regulations and reckless riding are what fuel crashes, regularising the business will help correct those practices.

Dealing with the okada menace and all forms of crashes on the road requires a strong enforcement regime, and the NRSA must go all out to enforce the road traffic regulations going forward, as it has promised.

Mrs Obiri-Yeboah, who gave that pledge in an interview on Thursday, January 14, said it was important for a definite decision to be taken by the government on whether to uphold the current laws that prohibited the use of okada or amend the law to regularise it.

"Which ever way we decide to go, we still have to strictly enforce the laws to ensure that riders of motorbikes and tricycles maintain sanity on the road," she stressed.

She said the authority would step up its public education on road safety, while collaborating with the Motor Traffic and Transport Division (MTTD) of the Ghana Police Service and other stakeholders to enforce the road traffic regulations.

The NRSA urged drivers to be more disciplined on the road by driving defensively; avoiding the triggers of road crashes and also ensuring routine maintenance of their vehicles.

• Some motorbikes impounded by the MTTD in Accra

The menace of road crashes is a hydra-headed development challenge that requires multi-stakeholder approaches to overcome.

While the mandated state agencies have approached it from the regulatory and enforcement angle, Civil Society Organisations (CSOs) and other non-state actors need to complement it with interventions that will promote attitudinal change among road users.

Individually, we must see ourselves as both predators and preys to road crashes and do our best to help reduce the menace.

The Accident  and Emergency Centre of the KBTH