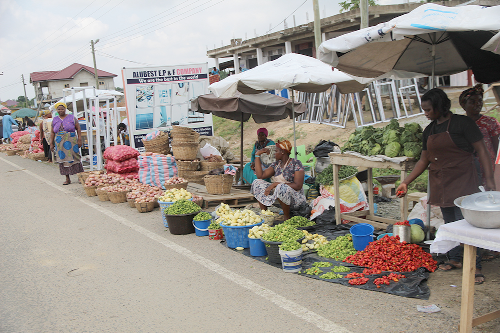 On my way to my hometown in the Central Region on Saturday, July 3, 2021, I experienced something I believe authorities particularly in Awutu-Senya-West and Effutu, including the Winneba area, must not go to bed over.

There is an area along the Buduburam-Winneba section of the Accra-Cape Coast highway which is now being prepared for the offloading of onions and other goods by articulator trucks, possibly from the western part of Ghana.

I presume that it could be part of the plans by the Greater Accra Regional minister in respect of relocating the Agbogbloshie onion sellers and other traders to Adjen Kotoku to free up the congested and chaotic capital city, Accra.

However, there is a potential problem with what I saw. Kasoa, a sprawling, unrestrained and boundary-less settlement, for decades created traffic jams which became nightmares for travellers on the stretch until the Accra-Cape Coast highway was constructed by the Kufuor-led administration and traders along the main corridor were relocated.

The problem is back because of partisanship and parties promising traders access to spaces that should not be used as trading areas.

Nearly $200 million of our scarce national cash had to be pumped into a flyover to mitigate the problem. After resolving the problem at Kasoa, it resurfaced at Buduburam, where I spent over three hours in traffic to cover a distance of not more than four kilometres that day.

This Buduburam enclave used to be occupied by a single church building which was used as a reception and holding centre for Liberian refugees in 1993.

Characteristic of us, we sat aloof when the reception centre for refugees grew into a boundary-less mega slum, with its resultant chaotic activities spilling onto the main Accra-Cape Coast highway and creating another hellish traffic jam.

I see some attempts are being made, once again, by the widening of the Buduburam portion to ease traffic.

It is in the light of that that I draw the attention of authorities to this new development beyond Buduburam, which is also close to the highway.

They should, as a matter of urgency and guided by the experiences of the Kasoa and Buduburam stretch, prevent the creation of another mega slum.

Indeed, this new place should be developed as a transit point for onion and other foodstuff traders for them to just bulk-break their produce for onward transportation into the city by mini trucks as it happens in developed countries.

My fear is that with our bad attitudes, coupled with our nonchalance and irresponsible oversight authorities, the place, gradually and steadily, will end up having permanent structures.

They will then become the permanent residences of the traders and others of dubious character, and become fertile ground for criminal activities.

Lorry stations will also spring up, with trotro/taxi drivers all blocking the main road to pick/drop passengers, and in no time, another notorious traffic-jam-prone and criminal enclave will emerge.

So if the main purpose for which this new development is coming up is to create a convenient space for truck owners on the outskirts of the capital in order to inject some sanity into the city centre, then the relevant authorities must not sleep.

Development in this area must be strictly regulated by the responsible local authority, in tandem with the chiefs and people.

The local assembly must ensure this facility never outgrows its area of operation. The rampant and illegal sale of lands by chiefs and indigenous people must never be allowed.

In the developed countries, sub-urban areas which are settlements outside the chaos of major cities serve as enclaves of peace, tranquility, orderliness, botanical aesthetics and impeccable environmental cleanliness.

On the contrary, in our case, what we call cities come absolutely nowhere near the real meaning of the word, while our new sub-urban settlements are nothing but citadels of chaos and havens for hardened criminals.

Anybody looking for what qualifies as a city in Ghana should take a look at the originality of Tema as designed and built by the great Osagyefo Dr Kwame Nkrumah: complete central sewage system, well-defined communities, beautiful access roads, many open parks for recreational purposes and well-manicured lawns and trees on all avenues.

And I said ‘originality’ of Tema because we have, through indiscipline, uncleanliness and recklessness in whatever we do as a people, reduced Tema, once a citadel of modernity, orderliness, beauty, comfort and environmental aesthetics, to a spectacle of filth and total disorderliness.

Today, one only sees a semblance of organised settlements in the filthy-rich Swiss-cheese-holes (closed communities) in Ghana.

But the great Osagyefo Dr Kwame Nkrumah, more than 60 years ago, had the vision and knowledge to build a whole township of much better standard for ordinary dock workers.

With absolutely no contestation, the Central Region does not want another mega slum and those of us who hail from that part of the country will be following developments with eagle eyes!

The writer is an international relations expert.