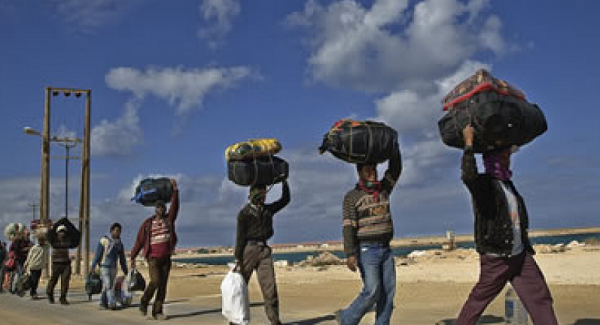 Mother of two Halima Abdulai, 34, came to Accra in 2015. Her decision to travel to Accra was based on the advice of her friend, Jemilatu Ibrahim, who had herself been in Accra since 2011. For Halima, circumstances necessitated she relocated from Savelugu in Ghana’s Northern Region to the national capital, Accra.

While in Accra she would be engaged as a head porter (Kayayoo) to earn a living. Losing her husband to a motor accident in Tamale only ten months after her second child, life was no longer bearable for her and her two children. Now a single mother and unemployed, survival instinct kicked, sending her first from Tamale to Savelugu to perch with her mother and her husband, a welder.

So when Jemilatu, who in Halima’s estimation was doing well in Accra invited her to come join the trade, she did not hesitate—it was an opportune call even if she did not have enough to pay her fare to Accra.

Her motherly love troubled her too. Who would take care of her children, especially the younger one? Her first child, a girl, was almost three years old then, and the second, a boy, was one-and-half years. She discussed her plans to travel to Accra to be a head porter with her mother. Halima’s mother was not too happy with her daughter’s decision, but she offered to take care of Halima’s first child.

According to Halima, aside from her fear of who was to take care of her children, she was also scared about the Kayayoo job since she had heard a lot about the many challenges Kayayei (head porters) go through in Accra, particularly with accommodation. Her good friend, Jemilatu, had assured her though that she would share her kiosk accommodation with her.

She finally decided to make the journey to Accra around May. That was in 2015. It was her first time visiting the capital, and she dreamed big. Jemilatu also sent her friend GH¢100 via mobile money to pay her fare. And when Halima finally got to Accra at the STC station, Jemilatu and a few of her Kayayei friends were already there waiting.

Jemilatu took her to her kiosk accommodation at Old Fadama, a slum community at Agbogbloshie in central Accra. Halima was happy that finally, her life was going to change for the better. But Jemilatu was not in the kiosk alone, she shared it with three other ladies, and Halima would be the fifth occupant. Halima was not worried at all about the kiosk being shared with other people; after all, they are all in Accra to better their lives for themselves—they are all hustlers.

On her first day at work, Jemilatu showed her around the ins and outs of the Agbogbloshie market. And on the subsequent days, she took Halima to other places she plied her trade. For Halima, although the Kayayoo job was tedious, it was better than doing nothing. On her first day at work, she made more than GH¢100 and for Halima, who was finding it difficult to come by GH¢20 back in Savelugu, it was a life changing beginning.

The band of lady hustlers did not anticipate the coming misfortune. Indeed they could not have. City authorities planned to eject squatters in the area for a proposed project, and the kiosk accommodation which provided a place for them to lay their heads, was part of illegal structures standing in the way. Sadly for her, the kiosk and hundreds other resting places were demolished just one-and-half months after she arrived in Accra. With no kiosk to sleep in, Jemilatu and Halima together with her other friends, decided to make the pavements at the COCOBOD head office their beds after the day’s work.

Halima’s case is but one of the many cases of people who leave their villages to the cities only to get stranded. Although Halima thought life in Accra will be good for her, things did not go as expected.

Rural-urban migration is very high in many major cities of Ghana, particularly in Accra and Kumasi due to the inequalities of opportunities that exist in the rural areas of the country.

A senior lecturer at the Centre for Migration Studies at the University of Ghana, Dr Mary Boatema Setrana, speaking via online during a two-day workshop organised by the Ghana Journalists Association (GJA) in partnership with the United Nations Educational, Scientific and Cultural Organisation (UNESCO) to develop guidelines for migration reporting in Ghana, said statistics had shown that there had been an increase in continental or sub-regional migration than international by Ghanaians.

"Unfortunately, media reportage has been on irregular migration through Libya and Morocco to Italy without focusing much of their reports on statistics of what the real experiences were', she noted.

Media Personality and gender advocate, Josephine Oppong-Yeboah believes that it is lack of opportunities in our rural communities, particularly in northern Ghana that push many of them to come to the cities.

For Ms Oppong-Yeboah, who is also the Executive Producer of Metro TV’s Good Morning Ghana programme, if the government really wants to stop or manage the rural-urban migration flow, there will be the need to look at the inequalities in terms of social amenities, health facilities, job creation, and educational opportunities in all areas of the country.

“What happens is that when we over concentrate developments in only Accra or Kumasi and abandon other regions, we provide fertile grounds to encourage rural-urban migration,” she noted.

She was of the view that the time has come for the country to evenly distribute development infrastructures across the country, noting that rural-urban migration is very critical; it could even affect our food security and also pose threat to our internal security.

“When people from the villages come to the cities and there are no opportunities for them, it is only natural for them to find other ways to fend for themselves and that is where crimes are committed,” Ms Oppong-Yeboah remarked.

She also charged the media to prioritise migration reporting in order to create more awareness about some of the underreported migration challenges in the country.

“The media has a critical role to play when it comes to migration education,” she noted, adding “Duty bearers need to be told the realities on the ground and it is the media that can do that job.”

For her, “We need the media to tell the stories on rural-urban migration as it is”, adding “It is very alarming how people are moving to the cities, in some instances, leaving their aged parents as well as their young children at home.”

The Dean of the School of Communication Studies at the Wisconsin International University College (WIUC), Accra, Dr. Kweku Rockson, is of the view that although the media plays a critical role in migration reporting, “the complex nature of migration as a societal phenomenon demands critical thinking and the fervent pursuit of multiple sources, in-depth investigation of initial responses and the attempt to undertake an inclusive search for the truth.”

That, he believes, the media needed to be empowered to understand the subject of migration very well in order to educate the public on the issue.

For instance, the SDG Goal 10, aims to empower and promote the social, economic and political inclusion of all, irrespective of age, sex, disability, race, ethnicity, origin, religion or economic or other status by 2030.

Similarly, SDG Goal 10 also calls for equal opportunities and to reduce inequalities of outcomes for all.