Breaking the myths around menstruation; a shared responsibility 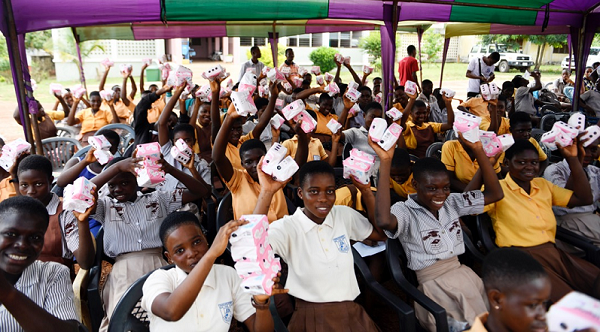 Plan International Ghana, a Non-Governmental Organisation (NGO), has distributed more than 4,000 sanitary pads to girls in schools in the Okere District in the Eastern Region as part of activities marking this year’s Menstrual Hygiene Day celebration. Follow @Graphicgh

Many women and girls across the world still feel discriminated against or stigmatised over normal bodily functions as basic as menstruation. Even though it is normal for women and girls to menstruate, many people still do have negative misconceptions about it—their misconceptions are often inspired by deep-rooted sociocultural practices and superstitious beliefs that run parallel to scientific knowledge and evidence.

Menstruation is part of the normal bodily function of women and girls of a certain age bracket. Menstruation or menses is the natural bodily process of releasing blood and associated matter from the uterus through the female genitals as part of the menstrual cycle. This natural process plays an important role in the lives of women, particularly in the process of procreation. Thus menstruation sets women on the right path of procreation, something which has kept our world alive since the beginning of time.

It is therefore unacceptable that because of this natural bodily function women and girls go through, they continue to be prevented from getting an education, earning an income and fully and equally participating in everyday life activities in modern societies.

In 2016, for instance, an estimated 335 million girls went to primary and secondary schools without water and soap available for washing their hands, bodies, or clothes when changing sanitary pads.

It is reported that in spite of the many awareness created on menstruation, millions of women and girls around the world are stigmatised, excluded and discriminated against simply because they menstruate.

A friend of mine always say that menstruation is not a crime and I agree totally with her. It is not a crime for our bodies to function normally. The moment we begin to see menstruation as something absurd or as an abnormality, is to say that we do not support or agree with the proper functioning of our bodies.

Similarly, there are certain men or people who forbid their wives or women and girls menstruating to cook for them. Such norms have been ‘culturalised’ in many societies across the world, including Ghana.

The discriminations, exclusions and its related stigma associated with menstruation necessitated the celebration of the Menstrual Hygiene Day on May 28, each year. The day is used to raise awareness about the challenges regarding access to menstrual products, education about menstruation and period-friendly sanitation facilities.

Similarly, it is used to break the taboos to end the stigma surrounding menstruation, while mobilising the funding required for action at scale across the world, particularly in regions where menstruation is still seen as an abnormality.

Ms Nancy Boafo, a poet and Founder of Spiritual Women Network, a women-centered organisation is one person who has been advocating for new mindsets on menstruation misconceptions.

For her, breaking the stigma and discrimination against women and girls going through menstruation demanded that “There must be enough education in our communities about mensuration.”

She is of the view that “people must be made to understand that mensuration is a natural occurrence within the female body which is essential for reproductive cycle”, adding “Education must be made in simple language to the understanding of every member within our communities.”

Ms Boafo believes that Civil Society Organisations (CSOs) need to collaborate with opinion leaders in the communities to pass on information about mensuration, saying “This could be done through seminars, symposiums, and conferences to raise more awareness.”

She further suggested that parents, teachers and care givers ought to support the awareness creation on menstruation by giving “extensive education on mensuration to their wards—e.g complications, symptoms, proper mensural hygiene.”

“Mensuration is not a shameful season but a peculiar attribute to the female, hence they must embrace it with all confidence,” she remarked, adding “We must be vocal about it and drum it deep into the ears of women that mensuration is not shameful but a blessing. Without it, women could be declared infertile.”

For her, it is worrying that some girls miss classes when menstruating due to the hostilities that face, adding that “In our localities, women during such periods are termed unclean; some are not allowed to cook for their husbands, some cannot visit some rivers during such periods, others also believe women have bad luck and must not be allowed to carry out some special obligations in such times.”

Gender activist and Media personality, Josephine Oppong-Yeboah in contributing to the topic said, “People must be made to understand that it is not shameful or a curse for a women or girl to menstruate—it is a blessing and a natural bodily functioning of the female.”

For her, it is important to give more education and empower women right from the early ages so as to enable them know what it means to go through mensuration themselves.

She said it will be good if the government, NGOs and leaders of various communities join hands to educate and support women during such periods, calling on the Ministry of Gender, Children and Social Protection to take the lead role in that regard.

Ms Oppong-Yeboah, who is also the Executive Producer of Metro TV’s Good Morning Ghana Programme, said it was worrying that women and girls will be stigmatised and discriminated against due to menstruation, something they have no control over themselves.

Francisca Nancy Hagan is the Founder of Developing Women for Skills and Opportunities (DWoSO), an initiative that seeks to promote women’s rights and wellbeing. Sharing her views on the topic, she called on gender advocates and health workers to intensify education on menstruation to break the stigma and taboos around it, pointing out that “Educating preteen girls to raise the awareness on menstruation would make them see it as a normal bodily function when they menstruate.”

She suggested that education on menstruation must include boys in order for the boys in particular, to understand that there is nothing mysterious about periods.

Touching on what kind of support systems that must be given to women and girls to ensure that they are not stigmatised or discriminated against due to menstruation, Ms Hagan said “Ads on traditional and social media and in books, should not project periods as dirty and something that should be hidden. For example, many ads use the color blue to represent blood than using red. This creates the perception that menstrual blood is dirty and should be hidden.”

“People must be deliberate to change their attitudes and perception about menstruation,”Ms Hagan said, adding “Women and girls in Denkyira Adiepena in the Central Region are not allowed to cross the Offin River to trade or go to school respectively on Tuesdays or when menstruating because the river god considers women and girls in their periods unclean. This affects the education of the girls and the day-to-day activities of the women.”

The DWoSO Founder also expressed concern over what she describes as lack of interest on the part of policy makers to consider menstruation matters as critical issues on national agenda.

“Policy makers’ lack of interest on menstruation is a barrier women and girls face. The 20 per cent import tax levied on menstrual products makes it expensive,” she defended her stance, adding “Women and girls are unable to afford them.”

She was of the view that policy makers over the years have turned a blind eye to the various calls by CSOs and feminists’ coalitions to abolish the tax on menstrual products to make them more affordable and accessible, saying “No woman should be held back because of period.”

RISE-Ghana, a health and governance focused NGO based in northern Ghana, is one of the CSOs leading the campaign to stop stigma and discrimination against women and girls undergoing menstruation in the five regions of northern Ghana.

The Executive Director of RISE-Ghana, Alhaji Awal Ahmed Kariama, called for urgent steps to end the growing stigma, lack of support systems and period-shaming of women and girls in Ghanaian communities.

He said there was the need to support women and girls in their menstrual cycles by providing facilities that would enable them to go through their periods hygienically and with dignity.

“We are empowering adolescents and communities to champion issues of menstrual hygiene rights, promote access to sexual and reproductive health information and services and create spaces for adolescents and gatekeepers such as health service providers and traditional and religious leaders to create an enabling environment for women and girls to exercise their Menstrual Hygiene Rights (MHR) and overcome the stigma associated with menstruation,” Alhaji Kariama explained.

He expressed the worry that many women and girls lack access to affordable, hygienic menstrual products, forcing them to use old rags, cloths or other unhygienic materials, adding that “This can lead to reproductive tract infections (RTIs) and other health conditions.”

He said his NGO is addressing Menstrual Hygiene Rights (MHR) through advocacy and community mobilisation through the support of its partners such as UNICEF-Ghana.

Alhaji Kariama also urged duty bearers and relevant stakeholders in society such as politicians, chiefs, opinion leaders, activists, and religious leaders to use their offices to educate and sensitise people on menstruation and its related myths and misconceptions, arguing that taboos and myths related to menstruation often portray women and girls as inferior to men and boys, exacerbating already existing negative gender norms and forcing women and girls to suicidal tendencies.